Playing full videos and insights are reserved for members. Please sign in or join the Academy. 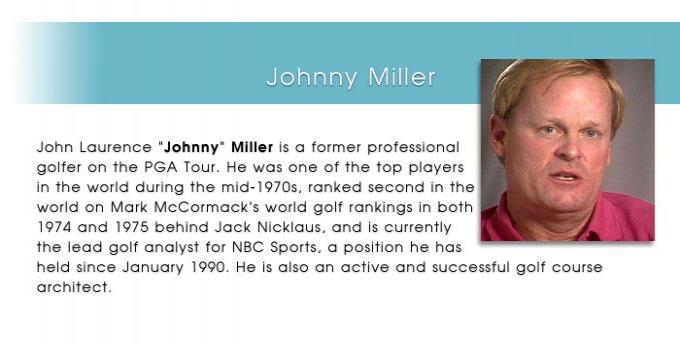 M: If you were to ask yourself a question that would help describe how you became one of the best golfers in the world, what would you ask?

: The thought that comes to my mind is what my father taught me when I was a young boy, he said, “if you want to be the best player in the world, you've got to be willing to do it. None of the other kids are willing to do it. It's that easy.”

What my dad convinced me of is that there are times when you can do all the other things, but there are always times when you have to sacrifice what the kids think is fun and you're gonna go out there and have fun on the golf course.

And he made it fun. So I guess I was willing to sacrifice, and without the expense of fun either. I have to say that I really did have fun playing golf, but it wasn't the popular thing to do.

M: When did you start?

J: I started when I was 5. My father started playing golf about when I was born and he fell in love with the game, and in five years he went from a beginner to a mid 70's shooter.

He won the San Francisco City Championship Sportsman Flag, he won a big trophy. I was just a little kid and he came home with that huge trophy, I mean it was huge, I mean this thing was nearly as tall as me! And I was proud of him. He said what a lot of people say when they maybe make their first birdie or break 80, or whatever, they say, “gee I wish I'd have started younger so that I could have been a great champion like the Sam Sneed, Ben Hogan's, Byron Nelson's of the world.”

My father got all the big books--Slammin’ Sam Sneed and Byron Nelson books. And he told me the story of Ben Hogan and the car accident. He just made it really interesting. He made it where golf was a lot of fun.

He was a very smart man. His philosophy was and is that kids thrive on praise. They thrive on positive, not negative. He never said anything negative. In my upbringing it was always “champ, nice going champ.” If I hit it bad, he said, “let's see what you can do on the next one.” It was never dwelling on the negative. It was always, always dwelling on the positive. Always positive. I had tremendous self-esteem because of my father. I had a very secure childhood. I knew he loved me and accepted me. And I know that there's no affirmation stronger than a father's affirmation that you're going to succeed.

M: Where do you think your dad got that intuitive wisdom to create that kind of space for you?

J: I think my father, in his own way, as sort of a genius, had a lot of ideas like that-- a lot of left-handed kind of thinking. In his background there were a lot of artists and sculptors and inventors, and I'm left-handed and I have the same thing my father has for this “one-off” thinking. I'm very creative. My right side of my brain is very dominant. My heart and creativity always beat out the creative Johnny Miller and I listen to it intently. And part of me is very much like a child in that I listen to my heart more than my mind. I think that's very rare these days, because as we grow up we learn to rationalize and intellectualize and play the odds. You know, you can't do this because . . . here's the history of it, here's the old way of thinking. If my heart says I can do it, I'll try it.

I've learned to try things that other people aren't willing to try. And that goes again with my father's thinking; you've got to be willing to do things the other guy's not willing to do, if you want to be the best. Sometimes you fall, many times you fall, but you open up new doors to go into new rooms. The one big large spacious room is filled with people that just do what they’re suppose to do, or think the way everybody else thinks. But to get in all the other fun rooms and have your brain expand with experiences, and also failures, then you have to try new things.