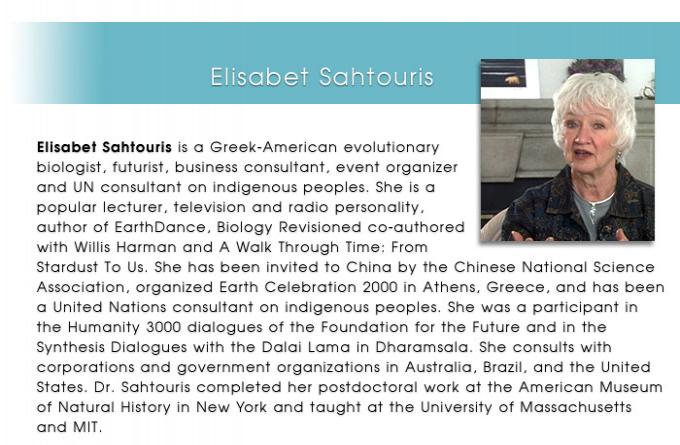 M: You made an observation - not only is this a really dynamic time but also the opportunity for new, wonderful, positive things to crack open. When I read the newspapers and look at the politics, the chaos, at all of the dark things that we’re seeing, that was a really bright observation. I’d like to look at that and talk a little about your background as a Biologist and how that background, looking at living systems, brought you to such an optimistic observation - that our glass is definitely half full rather than hall empty.

E: I started out very early as a child asking what I didn’t know were the big philosophical questions of the ages but basically who are we, where’d we come from and where are we headed? And I was allowed to run free in the woods as a child and on the Hudson River in the Hudson Valley. I still have its mud between my toes. That was a wonderfully creative experience because there were no grown ups watching and you really got to explore things in ways that I don’t see my grandchildren being allowed to do.

I wanted to study Biology. My parents said science was for boys and I ended up having to do four years of art school and then getting into Biology. And as an Evolution Biologist with a post dock at the American Museum of Natural History in New York I’m really a Past-ist but a Past-ist with a very long time frame and of course I really want to know where we’re headed and that’s a Futurist. So I’m a Pastist in order to be a good Futurist.