The “Glue” That Attaches & Bonds Human Relationships
James W. Prescott, Ph.D., Joseph Chilton Pearce and Michael Mendizza
Introduction
This essay precedes, compliments and supports Sensory Deprivation and the Developing Brain. It develops a scientific framework that establishes pleasure as the glue that forms and maintains human bonds. Think about it. Affectionate human touch is pleasurable. Being held as a baby, nursing at the breast of a pleasure filled mother, feeling close, safe and later in life, human sexuality and reproduction is full of pleasurable sensations. There is even a hormone, oxcitocin, called nature’s love or pleasure drug that produces the euphoric blush we all know and covet. It is time that we let pleasure out of the closet. And here’s why.
Abstract

More On - The Challenges We Face

“We are faced with a breakdown of general social order and human values that threatens stability throughout the world. Existing knowledge cannot meet this challenge. Something much deeper is needed, a completely new approach. I am suggesting that the very means by which we try to solve our problems is the problem. The source of our problems is within the structure of thought itself.”

Touch the Future began over twenty years ago. The vision was to help parents and those who care about children respond in the best possible way to the dramatic changes in the environment we call childhood, changes that exploded after World War II. We did not have the internet then. Social media and mobile phone-computers did not exist. The dangers that television represented are now compounded many times with ‘screen time’ replacing living, breathing relationships. Technology in the early classroom was just creeping in. Levels of autism, emotionally challenged youth and other pathologies were significantly lower but on the rise. Play deprivation was high with adult organized activities replacing free-range spontaneous play. The impact of hospital-technological birth on mother-infant-father attachment continues. Global warming with the threat of mass global extinction, including homo sapiens was a distant dream.

Morning and Muse often arrive together. Today their light cast long shadows across the wood floor. The house was still. Up before the others I sipped fresh coffee from a white cup. Quietly the glass door to my home-office opened. Carly’s head peeked in, her blond hair looking, as she often does in the morning, like Phyllis Diller’s. She climbed to my lap, reached and sipped a nip of coffee and rested her head on my shoulder. And there we shared a long quiet hug.

I am passionate about this. There are two interrelated issues:

If you have not done so please Submit a Formal Public Comment in Opposition to the CDC's Notice of Proposed Rule Making (NPRM) for the Control of Communicable Diseases Rule.
Every voice matters.

Some argue: “My voice doesn’t matter!” Barbara Loe Fisher, Co-Founder & President of National Vaccine Information Center and I disagree. This is the most serious violation of human rights and civil liberties Barbara has seen in thirty years. “They tried to push through a similar mandate during the Bush Administration. The public outcry was so great they backed down,” said Barbara. “The public does matter but they have been made to believe they don’t.”

Some did not recieve Enlightment is...
We are resending.

I hope every parent is knocked off their chair by the astonishing capacity their child exhibits every day. Recall – 700 new neural connections every second and each branch touches 10,000 to 20,000 other branches. Unbelievable! The environment is the teacher. Life, the senses, relationship and now names (times two) is the curriculum.

There Is No Controversy Over Vaccinations

Touch the Future, Kindred and ICPA (International Chiropractic Pediatric Association) are working with NVIC (The National Vaccine Information Center) to protect the sanctity of our children’s health and our civil liberty. Our goal is a modest 5,000 Public Comments at the CDC each week, 20,000 by Mid-October. I posted my comment today.

Yesterday I shared an interview with Peat Myers that described: “If you take a little bit of Bisphenol A and put it in corn oil and feed it to a mouse while she’s pregnant, and the amount fed to the mouse is equivalent to two parts per billion of her body weight, that a male mouse in her womb will grow up with a prostate that’s much bigger than it should be. And also its structure has been changed so that it’s hypersensitive to hormone stimulation. For the life of that animal, it’s got a different prostate. It’s got one that’s predisposed to prostate problems.” As little as 2 part per billion of some chemicals found in the environment is enough to alter development for a lifetime.

By now most understand that widely used chemicals mimic hormones, estrogen in particular, but few know what this really means. This interview is one of those eye opening experiences. It changed fundamentally how I view and relate to environmental toxins. A must see. 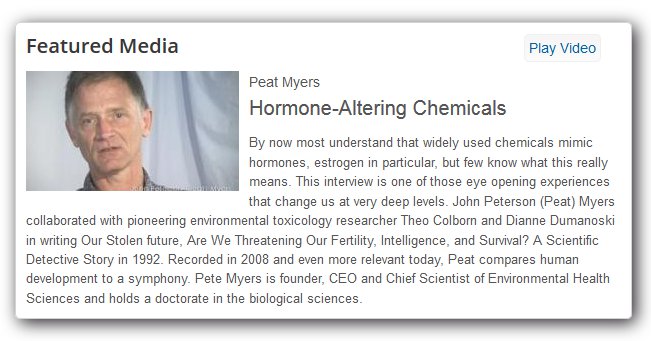