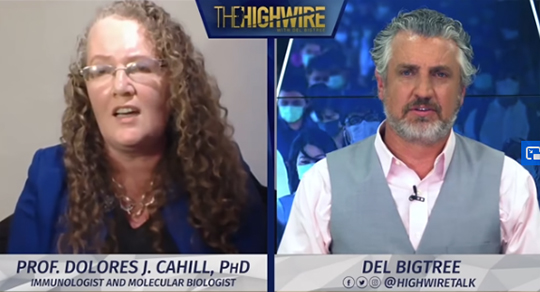 In a world where fake appears to be real by design, where real is censored, labeled a conspiracy theory, where professional reputations are systematically destroyed, decenters neutralized, where troll-bots prowl the internet and thousands of real journalists are out of work, where astroturfing and opinion-for-profit masquerade as the daily truth, who can blame anyone for being confused and polarized?

Fact: the tests are meaningless. According to Professor Dolores Cahill, one of the European Union’s most celebrated and respected scientist, which now means she is censored, testing positive is the good news, not the sign of an emanate blood bath that never happens. Testing positive means that large numbers of the world’s population have formed lifelong natural antibodies, most with no symptoms at all, without vaccines, tracking or implants, is something to be celebrated, not feared. According to the Director of the CDC’s presentation to the Whitehouse on April 17, 2020, the Corona plague is over in the United States. See: Real science, not media or political pretend science.

In this interview Dolores states clearly; the entire lockdown policy is not based on science. Compulsory masking does nothing to limit transmission but does pose a significant risk to the person wearing the mask. Dolores ends by stating how she and her colleagues (in real science) are keeping track of the unnecessary deaths caused by the lockdown, unproven (computer modeled) social distancing and compulsory masks, and will hold politicians and public health officials accountable for what she describes as a ‘crime against humanity.’ Strong words, but yes, accountability is something we all must demand.