Like Alice in Wonderland, Carly Elizabeth changes so much each day it’s hard to know just who she is. Blink and she changes again. Astonishing! There is no other word to describe it, watching, day-by-day, as Carly’s capacity to imagine explodes. Equally astonishing is the way most of us miss what is taking place, right before our eyes.

I was just like everyone else, that is, until I met Joseph Chilton Pearce. One of his more powerful presentations described the etiology, the origin, of imagination; vibrations coalescing into sounds, phonemes to be more precise, the fundamental building blocks of spoken language, how each phoneme of the mother’s voice stimulates a unique physical response in the developing baby in her womb. How, a year later, this synchronicity with the child’s language-environment becomes a name for everything and every experience. How the symbol-name builds in complexity to form moving inner images in response to story. Joe described how the ‘listening story imprint’ quickly becomes an inner narrative that the child mimics and self-performs, creating thunderstorms of streaming images that are acted out in the world, transforming a stick into a magic-wand or a leaf and bits of grass into a salad for imagined mice. And how this capacity to transform the outer world into something completely new, creating heaven or hell depending on how it is used, sets human beings apart from all known species. Yep. That’s Carly Elizabeth, three and rushing closer to four.

Joe noted; "if we understood the true nature that the capacity to imagination represents we would treat every child, our approach to education and society profoundly differently." Why would Joe make this observation? We begin by considering the obvious, that is not so obvious.

What we call language, experience as memory, the active process of thinking, and past thinking, what we call thought, our individual social-self or ego, and the collective self we call culture all reside in the realm we call imagination. That is; in the capacity to create inner images not present to the sensory system. Language, thought, experience as memory, the image we have about ourselves and others, and the collective meta-image we project outwardly as society and culture all exist and reincarnate over-and-over as inner images. (Note; feelings and emotions are also images, of a different order than thought, resonate representations of inner states.) But, and this is an important caveat, we are generally not conscious of the inner working of the process, only the result; the images and the feelings and behaviors attributed to the image. The trouble is, we don’t experience the image as an image. We reify the abstraction and treat the image as an independent truth or reality, especially the images we have about ourselves and others, as physicist David Bohm, protégé of Einstein, describes below:

We don't really understand the nature of our thought process; we're not aware of how it works and how it is disrupting, not only our society and our individual lives but also the way the brain and nervous system operate, making us unhealthy or perhaps even someway damaging the system… The kind of thought that is disruptive is self-centered thought. At first one might wonder why self-centered thought is so bad. If the self were really there then perhaps it would correct to center on the self because the self would be so important, but if the self is a kind of illusion, at least the self as we know it, to center our thought on something illusory which is assumed to have supreme importance is going to disrupt the whole process. It will not only make thought about yourself wrong, it will make thought about everything wrong so that thought becomes a dangerous and destructive instrument.

Once it has been assumed that this self is real and not merely an image, its attributed reality. It then takes first priority and everything else comes second, so everything is distorted… Because this image of the self, the concept of the self, is assumed to be all-important, the brain starts to develop a defense mechanism to defend this image against perception of its falseness or illusory character. And part of the defense is to make us unconscious of the process… We are not conscious, certainly of the defense mechanism, because this process of concealment itself has to be concealed in order to make it effective, and therefore, the major part of defense consists in making the whole process unconscious.

What David is describing about images-of-self, apply equally to many of the beliefs and feelings we hold.  Generally, we are not conscious of the inner working of the process and this is true for ourselves and more to the point, when relating to our children. But what if we were?

If we understood the true nature that the capacity to imagin represents we would treat every child, our approach to education and society profoundly differently.

The dictionary defines imagination as the ability to create images not present to the sensory system.  If we knew the critical nature of imagination, how it's the very core, the very foundation of all higher stages of learning and intellectual life, we would certainly look at the child differently.

First, play is the major intelligence of the first seven years and even the first 11 years of life. Again, we'll put up our birth, age one, age four, seven and 11, and we will go on and put 15 for now, as our major developmental stages, regardless of whether you agree with all the Piaget content of those stages, we do know those stages are biologically unfolding at those times.

From the seventh month in utero, before a child is born, every time the mother uses a word, each phenome name of the word, and we are talking about vibrations, a word is just a vibration of sound, each vibration, called a phenome brings a muscular response in the infant.

From the very beginning, there is this intimate connection between body, body movement, the brain, and its formation of word structures. By the time the child is born, this is myelinated, it's locked in as a permanent structure.

In what we call the in arms period, the eyes, the visual process dominates. Things aren't auditory as much as they are visual in those first few months. Why? Because we couldn't develop vision in utero, and so the first few months, everything is visual to that child.  They are looking, looking, looking, absorbing enormous amounts about their visual world.  Around six to 12 months, we have what Piaget called object constancy. The child's visual world, simply, suddenly stabilizes.  We know this is brought about by myelination of the axons involved in all sorts of other maturation processes. The auditory fields and the visual fields of the brain stabilize, they mature enough so total entrainment on the visual process is no longer needed somewhere around the first year of life. And language and walking appear.

Now, let's look at the growth of language itself, and the relationship between word and thing. I love the work of Blurton Jones, working with Tenbergen, the Nobel laureate, in the cross cultural study of the pointing syndrome. When the little child is in their own nest, they think anything is safe to interact with. And just watch it, a child in a house, anything, they will just jump right in on it.  They want to taste it, touch it, smell it, feel it, and immediately say, what is that mamma, what is that daddy. They are asking for a name label for the object.

When you give them a name, that word for a thing, the word and the thing build into the brain as a single neural pattern. The brain does not build a neural network of the thing, its taste, touch, smell, feel and in quality, and then, in addition, add to that pattern its name, as though the name were a separate item. The name builds in as an integral part of the whole structure of knowledge, as Piaget calls it.  A structure of knowledge is a neural pattern that results from the child's inner action with an object or an event of his physical world out there.  And the brain responds by creating those neural fields that can handle that kind of phenomena. The name and the thing build as a single unit.

We call this concrete language. The word doesn't stand for the thing, the word and the thing are the same to the early child.  Ask the two-year-old child to say the word 'hand,' and they move their hand when they say it.  Why?  Because the word ‘hand’ means something very tangible, something very concrete.  They can't deal with abstractions at all.

When you take the child out in the open, away from the nest, all mammalian animals respond the same way.  The child spots an object, let's say, it's a dirty, nasty, old dog. If they have never seen one before, they stop, point toward the object, and silently turn around and stare at the caretaker, whoever it is, grandma, papa, mamma, and wait for some kind of a signal from the parent that they perceive this particular object.  Getting that signal the child interacts with the object, to taste it, touch it, smell it, feel it, talk to it and build, what we call, a sensory-motor structure of knowledge of that object, and of course, immediately want to know, what is that mamma. They ask for a name.

Let's suppose that it is a dirty, nasty, awful looking, old mongrel dog.  Mamma says, don't you dare touch that dirty, nasty, mongrel, old dog. Her acknowledgment of the dog is all the child needs. This is the model imperative. The child must perceive some kind of verification that the mother is interacting and perceiving this object. With that verification, the child rushes over to interact with the dirty, nasty, old dog.  Mamma saying don't, has nothing to do with it.  The child is impelled.  They are driven, by nature, to interact with the object and build a structure of knowledge of it.

MM: That is the Model Imperative in action and we are generally not aware how this profound 'tacit' force impacts our child’s development. But what if we were? 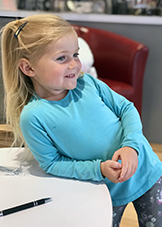 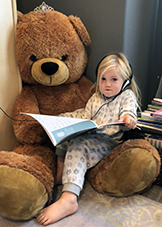