Story and Leading into Play

Until age five or six early child’s play is 90% self-play. The child may be with other children or an adult who are doing similar activities, but the focus of the child’s play is still personal. Group play requires a number of children act out the same story together, that they pretend to be the King or Queen, or the Frog Prince. This is very complex, abstract. The early child is concrete in their play. Nearly all play during the early years involves story, sensory experience, touch and movement.

It is the role of the adult to create a rich environment to experience and explore and then to stand by, observe and see or suggest what might be useful, based on what the child is engaged in. For example, asking the child; “Do we need more water for the paint?” or, “I will get more paper,” rather than telling the child what to paint.

At the beach today we brought sand toys, food and an orange ball. When Carly began raking the sand, I asked, “should we build a castle?” “Yes," she said. I lead her into play with that suggestion. The question initiated a new story. She and I poured sand into the yellow pail and built walls until Carly shifted her focus to water. Her shifting of attention was my que to begin a new story. The challenge was now to create a game with the water and lead her again into play. Once engaged Carly is the story. I grabbed the orange ball and kicked it. This was again, leading Carly into play, first on dry sand and then into the water, which was another story, another game. At each step, the creative adult invites play by leading or inviting and then following the child’s lead, kicking or chasing the ball – responding to what she is doing.

When it was time to leave, I described how we needed to dry off our feet because we will soon be getting ready to go. I did not say, “it’s time to go.” Leaving is a new story. Children need time and space to change directions, to enter into a new activity. They need to finish one story before they can actively get engaged with the next. Adults are often abrupt. They need to invite the child into the next activity with story and then give the child some time to leave one activity-adventure and enter into the next. If we make the new story fun and interesting, they will be happy to play along – instead of fighting. Conflict arises when adults change the story before the current story has come to a close. Creative adults lead the child into the next adventure – rather than demanding the child do what the adult says.

In the car, I described how we would take a nice warm shower when we get home – to wash off the sandy butt and then have a snack. I told that story fifteen minutes before that play-adventure would begin. This gave Carly time to shift into the new story that I was inviting, leading her into. This ‘leading into’ is important with everything we do. We need to be creative, imaginative, inviting her into the next story to be acted out physically with engagement. I engaged and invited Carly nonverbally by kicking the orange ball when her play-attention drifted.  In the car the invitation was verbal. Both were story.

It is the story that leads and engages. Kicking the orange ball initiated a new nonverbal story. Original Play researcher Fred Donaldson, calls this, ‘the play look.’ That look was implicit in my kicking the ball. The story was, ‘let’s see how high it will bounce,’ or ‘what will happen when the ball rolls into the water?’ The act of kicking began a nonverbal story. Taking the shower was lead into with a verbal story, in this case long before we reached the shower.

To lead our child into play with story we must first imagine and feel the story in ourselves. All the rest is magic. 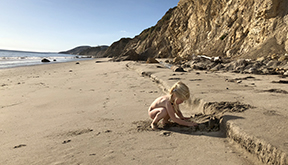 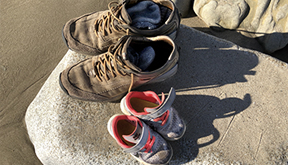