We make such a fluff about Santa and his magic reindeer, the cookies and milk by the fireplace, year after year, buzzing with zealot excitement, only to say at age seven, nah – just kidding. Grow up, kid – there’s no Santa. And Mickey and Bugs, they aren’t real either. In doing so we become big fat liars and kids know it. If we lie about Santa, why would they believe anything we say - ever?

We tell kids all sorts of lies (I mean stories): that Columbus discovered America when he really bumped into the Caribbean believing it was India. Truth is often so complicated that we make up simple tales that embody the meaning we hope to share in action rather than abstract logic. That is what stories do – embed abstract concepts, kindness and generosity, into action – ‘Santa is coming and bringing gifts for good little girls’ and boys’. Stories are enchanting. Explaining the virtues of kindness to a three-year-old is not.

Stories are evocative and are repeated year after century. Real things or events are embedded in stories. Stories shape perceptions, they morph into belief. The embedded meaning, however, often gets lost creating fuzzy logic that infects generation after generation, causing millions of people to believe all sorts of ridiculous things.

Before Christianity, for example, humanity evolved for tens of thousands of years and maintained very high cultures for centuries. The symbolic mind of man was fully active throughout the ages and created stories to represent important ideas or events. A winter tale took form and was repeated in different cultures throughout the world.

In 3,000 BC the son (sun) of God, Horus, was born on December 25, by a virgin, was heralded by a star in the east, visited by three kings, became a teacher at age twelve, was baptized and began his ministry at age 30, had twelve disciples, performed miracles, was known as ‘the truth, the light, god’s anointed son, the good shepherd, was betrayed, crucified, buried for three days, and was resurrected.

Attis in Greece, 1,200 BC, was born on December 25th, by a virgin, performed miracles, was crucified, buried for three days, and resurrected.

Mithra of Persia, 1,200 BC, was born of a virgin on December 25th, had 12 disciples, performed miracles, upon his death was buried for three days and resurrected, the seventh day of the week was one of worship for Mithra and was called “Sun-day.”

Krishna, India, 900 BC, born of a virgin on December 25th, with a star in the east signaling his coming, performed miracles with his disciples, and upon his death was resurrected.

Dionysus of Greece, 500 BC, born of a virgin on December 25th, was a traveling teacher who performed miracles, turning water into wine, was referred to as the king of kings, gods’ only son, the alpha and omega, and upon his death was resurrected. And there are many others.

So many stories spanning thousands of years, in different cultures, yet all have the same attributes. How can that be? They are all the same story representing common astrological, rather than personal, events. The star in the east is Sirius, which, on December 24th aligns with the three bright stars in Orion’s belt, known today, as they were throughout history, as ‘the three kings’. On that day the star in the east and the three kings point to the place where God’s sun is born – sunrise on the dawn of the winter solstice.

In the mythic mind concepts are anthropomorphized, that is, non-human events or objects are personified with human traits. A human or godlike character is created, then wrapped in story elements as an actor might be in his or her costume. There is no shame or deception here. This is the way good storytelling works.

The pre-logical mind of the early child lives in stories. They sit in rapt attention, eyes wide, mouths open, consuming every word, spellbound by the inner images dancing in their growing mind. Words create inner images and images are little stories, symbols and metaphors. Travel to Europe and you will find winged cherubs and angels hovering in midair on medieval walls. Did the artist-storyteller really believe that angles have wings or is the image a little story crafted to convey angel-like qualities, transcendence, lighter than air, a presence or force that is not bound by physical constraints? Wings and red suites are the outer story. The ‘real’ qualities that define an angel or Santa are deeper, more abstract.

Sure, there was once a kind old man who gave gifts to neighboring children. What this man did was touch people with his spirit of generosity and kindness. To honor the importance of this spirit the symbolic mind created a story, Santa and his magic sleigh. The story becomes a vehicle that carries the deeper message of generosity and kindness into the future. The image of Santa is a metaphor. The ‘real’ Santa is generosity, kindness, hope and renewal, not a jolly fat man in a red suite.

For young children the concept of an invisible force such as kindness, generosity or love is challenging. It is much easier to say that a magic person named Santa does all these wonderful things. Santa’s actions speak louder than abstract words. At seven the mind of the child distills and real analysis emerges. About this time they start asking questions like ‘why doesn’t Santa eat all the cookies I left for him?’ We, struggling to cover our well-intended white-lies, explain that Santa only eats one bite because if he ate the whole thing he would explode from cookie overdose before he left Iceland. Then the real questions start. Is Santa real? Have you ever seen him?

We are called to the mat, pinned, our credibility is on the line, not just about Santa but about all the other stories we pretended were true. What about the tooth fairy, angels, super powers, all sorts of magic? Is that all fake too? The real inner meaning of the Santa story has not changed. What changes is the mind of the child. Just as sirloin steak is inappropriate for newborns, abstract concepts are inappropriate for the pre-logical child. What is needed is a new story, one appropriate for the needs and capacity of that new mind.

What is ‘real’ changes when we look behind the image and see the story as a vehicle for its deeper meaning. The challenge is to redirect the child’s attention from the outer story - red suit, white beard and big tummy - to the inner qualities, which is where the ‘real’ Santa Claus abides, and to do so in a way that is in tune with the child’s mind at this age or that. It is not surprising that no one sees the real Santa. He comes and goes in a blink, leaving behind surprises and holiday cheer. One does not see the real Santa Claus any more than one sees gravity or light. The spirit that animates, generosity and kindness, is invisible. The real Santa, being these inner qualities, is invisible, as he should be. Being invisible is part of the metaphor.

We could say that anyone who acts like Santa embodies the spirit of generosity and kindness. The spirit or magic of the original Santa, which is a quality we all have, touches us as light touches the leaves of a tree. We are infected and infect others with the same spirit of kindness and generosity as the original Santa. He lives in us the same way that light gives life to everything that grows. Light is a good example. We don’t see light. It is invisible. What we see is the way light bounces off things, illuminating their color and shape and shading. So it is with love, kindness and with Santa. Is light real? Is love real? A rose by any other name (image) would smell as sweet. By the same measure Santa is real.

The question is “Can you feel Santa’s light of kindness and generosity as it spreads across the world? Is kindness and generosity just an idea in your head or is it something that you feel in your body and heart?” It starts with an invisible feeling that spreads like light and touches others. Santa is as real as light. We might say that those who don’t believe in Santa have put up a barrier that prevents Santa’s spirit and light from touching them, in the same way that deaf people don’t hear music, or people who are color blind don’t see colors. They mistake the story image for the spirit that animates the story. Santa is as real as love.

Santa and Fairies don’t change. It is the way we see and experience the world that changes. But it doesn’t have to. Real development maintains the old as it opens and expands the new. Nature wants us to keep all the wonderful powers of the young ‘childlike’ brain as we add the miracles of the new brain. Genius is not one or the other, but the best of both.

Yes, Virginia, there is a Santa Claus. 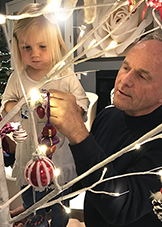 Is There a Santa Claus?

From the Editorial Page of The New York Sun, written by Francis P. Church, September 21, 1897
We take pleasure in answering thus prominently the communication below, expressing at the same time our great gratification that its faithful author is numbered among the friends of The Sun.

"Dear Editor--I am 8 years old. "Some of my little friends say there is no Santa Claus. "Papa says, 'If you see it in The Sun (the newspaper) it's so.' "Please tell me the truth, is there a Santa Claus?
Virginia O'Hanlon
115 West Ninety-Fifth Street

Virginia, your little friends are wrong. They have been affected by the skepticism of a skeptical age. They do not believe except they see. They think that nothing can be which is not comprehensible by their little minds. All minds, Virginia, whether they be men's or children's are little. In this great universe of ours man is a mere insect, an ant, in his intellect, as compared with the boundless world about him, as measured by the intelligence capable of grasping the whole of truth and knowledge.

Yes, Virginia, there is a Santa Claus. He exists as certainly as love and generosity and devotion exist, and you know that they abound and give to your life its highest beauty and joy. Alas! how dreary would be the world if there were no Santa Claus! It would be as dreary as if there were no Virginias. There would be no child-like faith then, no poetry, no romance to make tolerable this existence. We should have no enjoyment, except in sense and sight. The eternal light with which childhood fills the world would be extinguished.

Not believe in Santa Claus! You might as well not believe in fairies! You might get your papa to hire men to watch in all the chimneys on Christmas eve to catch Santa Claus, but even if you did not see Santa Claus coming down, what would that prove? Nobody sees Santa Claus, but that is no sign that there is no Santa Claus. The most real things in the world are those that neither children nor men can see. Did you ever see fairies dancing on the lawn? Of course not, but that's no proof that they are not there. Nobody can conceive or imagine all the wonders there are unseen and unseeable in the world. (emphasis mm)

You tear apart the baby's rattle and see what makes the noise inside, but there is a veil covering the unseen world which not the strongest man, nor even the united strength of all the strongest men that ever lived, could tear apart. Only faith, fancy, poetry, love, romance, can push aside that curtain and view and picture the supernal beauty and glory beyond. Is it all real Ah, Virginia, in all this world there is nothing else real and abiding.