Traveling with Carly Elizabeth, 22 months today, has been a rich adventure for her and for me. Neither she nor I speak the language. People all around are talking about all sorts of things but what she and I mostly get is energy, hints of emotional context, but very little content. This creates a very unusual vantage point, at least for me. I get to experience, more or less, what Carly is experiencing, and the best word I can think of is energy. Suddenly all the people and things we encounter are big or little, intense or calm, loud or soft tornados of swirling energy, bumping into the other and changing as they react to these collisions.

Also revealed is the dramatic difference between two very different qualities of attention that each tornado embodies. Dults, we often over stuffed and overly complicated adults, are usually off in some virtual daydream so our tornado vortices are pretty sedate compared to many toddlers. There is quiet attention as seen when children are listening to a story, are innately curious, full of wonder, and there is attention that is demanded when responding to stimulation. Carly, still pre-verbal, is generally quietly attentive and her movements often reflect this. Quiet attention is more or less intentional and sustained. The response to stimulation is more reactive, reflexive and short lived. When quiet attention is not there the only thing left is the reflex. Both involve attention but the nature and quality of attention is fundamentally different.

I observed years ago that we are defined moment by moment by the quality of attention we embody. Realizing this one seeks to optimize the depth and quality of one’s attention knowing that optimum attention will generate optimum learning and performance. To focus on content without expanding capacity, which is the status quo, is silly. As the environment we call early childhood became more and more stimulating there has been a shift in the patterns of attention seen in young children. Gabor Maté, MD, titled his book on ADHD ‘Scattered’ and for good reason. Reflexive, scattered attention resembles a pinball machine more than it does quiet curiosity and wonder.

A calm and consistent emotional milieu throughout infancy is an essential requirement for the wiring of the neurophysiological circuits of self-regulation. When interfered with, as it often is in our society, brain development is adversely affected. ADD is one of the possible consequences.

ADD is an example of how the neural circuitry and biochemistry of the brain may be held back from developing optimally when appropriate input from the environment is interfered with.

Three-quarters of our brain growth take place outside the womb, following birth, with most of this increase occurring in the early years.

Five-sixths of the branching of nerve cells in the brain occurs after birth… At times during the first year of life, new synapses are being established at a rate of three billion a second.

Of all environments, the one that most profoundly shapes the human personality is the invisible one; the emotional atmosphere in which the child lives during the critical early years of brain development.

Scattered:
How Attention Deficit Disorder Originates and What You Can Do About It
Gabor Maté, MD

Of course family patterns, diet, technology and the attention patterns of the larger community are the primary environment-experiences the early child attunes with, models and becomes. This becomes quite challenging when the child is mirroring the adult culture which is often invisible, being normal, to the adult. One of Joseph Chilton Pearce’s core insights is what he calls the ‘model imperative.’ Of an infinite spectrum of possibilities the child develops only those capacities that are modeled in the environment. Implicit in this insight is that the model environment must change if any change is expected in the child. Trying to ‘correct’ the child’s attention challenges, treating it as independent from the environment, simply creates conflict and frustration for all, which itself becomes a model and defended against.

Throughout human history ‘story’ was the model-stimulus that cultivated quiet attention. Children sat, enchanted by the narrative stories that surrounded them each day and especially in the evenings. Listening to stories (without images) is extremely demanding for the developing brain. Abstract symbols and metaphors enter as sensory vibrations and must be lifted up and translated by the neomammalian brain centers into mental images, a form of theater in the mind. Screen images and pictures enter as sensory experiences, remain in the ancient sensor-motor brain and bypass this conversion by the much more advanced centers. Competency in processing highly abstract concepts such a beauty, fairness, empathy and E=MC2 rest upon the development of story and the imaginative skills that story without images represents.

Complete attention, not reflexive attention but quiet attention, is needed to convert the words being heard into internal mental images and the unfolding of imagination upon which all higher learning and true personal development depends. There is also a deeply personal social-emotional sensitivity and awareness of the storyteller's ‘presence and state’ as the story is being told. Body tension, tone of voice, facial expressions all contribute to the inner theater the child is experiencing and this heightened sensitivity matures into empathy and empathic relationships.

Scattered, pinball, reflexive attention lacks many of these internal qualities. Bing-Bam, and it is off to the next Bing-Bam without empathy. Over time the child becomes addicted to the flashing lights in the pinball machine. Their body and emotions need stimulation or there is a feeling of dis-ease. If the environment doesn’t provide it – they will. At its core, Gabor observed that Scattered or ADHD is an attachment disorder, an inability to connect and relate inwardly. Being scattered is a disassociation or inability to relate with quiet attention and the appropriate empathy quiet attention implies. Outer stimulation replaces relationship as the source of development and wellbeing.

As meditation and various yogas are used by adults to retreat from chronic scatteredness, so storytelling is for the young child. I can’t think of anything that will slow down, awaken quiet attention and cultivate empathy as shared storytelling between parents and children. Better still, when quiet attention and descriptive narrative replace technological stimulation as the norm in home and at play.

This distinction between quiet attention and reflexive attention appeared spontaneously in grandma’s bedroom. Carly and I were rolling yellow play doh balls when a new swirling tornado spun in, a six month older very boyish cousin who swooped down and took the play-doh from Carly and then reached for mine. Carly was taken by surprise. I resisted. Again, language and its conceptual realms were not at play. This was a sensory event. When retrieving Carly’s yellow ball the boy ran out of the room and tossed the play-doh on the floor with a well practiced display. If not me then no one was the implication. Carly’s attention shifted to a cardboard book with pictures of things she could name; duck, ball, shoes. Turning the pages and pointing, the boy returned with his spinning intensity; up on the bed tossing pillows on the floor, down on the floor pushing a small wood train on its track, up on a small glass table scattering the books that were there. This was no Whirling Dervish, it was a tornado. I wish there was a hidden camera on the ceiling. There would be Carly sitting on the floor and this blurred streak of energy darting all over the room like the patterns sparklers make in the dark on the fourth of July.

It was so clear and obvious how infectious this bouncy swirling energy is. It demanded attention, like it or not. Carly, unaccustomed to this kind of energy, was cautious. She observed with guarded attention. Being unpredictable the boy could not be trusted. Carly became tense, protective, and this too became a reflex. You could see it whenever the boy was in sight, or even when his name was mentioned. The boy’s behavior was not intentionally mean or violent. Reflexes are reflexes. Being grounded in the ancient sensory motor fight-flight centers of the brain, they are inherently aggressive. In this reptilian realm there are no relationships or empathy, only reactions.

Observing all this it became clear that I intentionally evoke quiet attention with Carly even when jumping on the bed. As the excitement goes up the need for quiet attention does as well. Walking through toy stores, the aggressive imagery in children’s media, the lack of alone time, laying alone in the grass or with fingers in the sand box and the almost complete absence of storytelling -it is easy to see how the spinning cousin is deeply conditioned to spin, and all well established at 22 months.

Two year olds become four years old and then sixteen and twenty four. We don’t recognize capacities not developed. Everyone believes that their perceived reality is ‘The Reality’. I purged over 1,000 emails after being away for two weeks. We are touched by lots of data but absorb very little. We glance, scan and respond, much of this with reflexive attention. With the Lincoln-Douglas Debates of 1858 one candidate spoke for 60 minutes, then the other candidate spoke for 90 minutes, and then the first candidate was allowed a 30-minute "rejoinder." Compare this to today’s sound bite narrative and thirty second propaganda ads. A general and pervasive reduced capacity for sustained quiet attention inwardly expresses outwardly and this feedback loop further strengthens reflexive behavior in society. Trump’s pandering of racism is a clear example.

The antidote to reflexive attention is intentional quiet attention. This pattern, which impacts our individual lives and expresses outwardly as society and culture, begins with the quality of attention modeled and shared very early. There is great peace and calm in the center of the cyclone. The greater and dynamic the challenges outwardly the more one needs to be grounded in this calm quiet center. Having this – quiet attention – be the connecting state we share with our children cultivates this in both parent and child, even while jumping on the bed or climbing a tall ladder. The quality of attention we bring to each moment defines who we are. 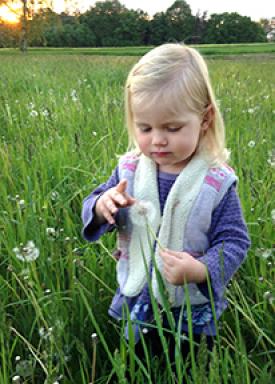