Suddenly, it becomes apparent that this precious moment we call early-childhood will never come again. Never. This moment is over, pushed aside by a new moment. It was just a blink ago that Carly Elizabeth would announce that she needed to pee. “A pee party,” we celebrated as I walked her to the potty. She would sit on her potty and I on mine. It was, indeed, a pee or poop party. Yesterday, when she announced that it was ‘that’ time, she added, “I will – alone,” and that is what she did. An era had come to an end. As we celebrate each new milestone we often miss the ending of what was – now – just a memory and it happens every day.

As wonderful as pee parties are or were, the new adventures that pushed them aside are just as delightful. Humor is blossoming like a spring garden. If you have ever traveled to a foreign country you appreciate how subtle and complex humor can be, often saying one thing but meaning another. At thirty-two and one-half months, and that is just a tiny-bit more than two-and-a-half years, Carly is laughing and kidding like a barroom sailor. “I’m going to go bug Mama,” she says.

With each tick of the clock, Carly’s capacity grows. Her development is seamless; one movement flowing into the next, her inner world of word, image and imagination is exploding. We adulterated adults live in a reality dominated by abstract thoughts with their inner images and feelings. As Carly enters this uniquely human reality, we barely notice. The more she becomes like us the less unique she appears, at least, from our habitual point of view. We have to awaken out of our habits-of-mind to see the dramatic changes unfolding right before our eyes. Not doing so betrays Carly’s true nature and this begins the fall of us all.

Butt naked, the way she likes it, Carly zooms from room to room, turning sharp corners on her pink scooter, her motorcycle. “I’m going to Santa Barbara,” she declares, zooming past. The other day Barbora, our au pair, and Carly went to the natural history museum in Santa Barbara and before that, we travelled to San Francisco. The other evening Carly reached down and picked up a white domino, pushed the keys on the keypad and held it to her ear, “Hello,” she said, “come over and read a book - goodbye.” Another time I was driving. Carly leaned forward; her tiny fingers touched the back of my neck. “It’s a spider,” she said, giggling. There is a covered sandbox in the garage, next to my photography table, where Carly can dig and play. She scooped a wet goop of sand on a metal putty knife and carried it out the door. Outside, next to the house, is a child’s kitchen; a stove, oven and on top a microwave with a keypad. She took the sand, placed it in a purple frying pan and placed the pan in the microwave. Closing the door, she pressed the keys. She sat in the gravel for a moment or two, then pulled out the purple pan. “I made soup for gorilla and Baya,” she said. And this goes on every day, all day, nonstop movement, as she chases new images dancing in her blossoming imagination.

Joseph Chilton Pearce first opened my eyes to the vast, almost incomprehensible, significance of this everyday blossoming. The dots on a domino representing the keypad on a cellphone, sand being soup, fingers becoming spider legs, these are profound accomplishments that leave other species in the dust, at least from our current understanding. Nearly all forms of so-called education and higher education rest on this ability of abstract metaphoric imagining. Language, culture, our self-image, political and religious philosophies, racism and the holocaust, concepts such as honor, freedom, beauty and spirit all are planted in this cognitive garden and here it is blossoming at thirty-two and one-half months – in two languages! It took nature billions of years to pull off this miracle and we dults are so lost in our enchantment this marvel produces - we hardly notice.

With this unfolding comes humor. Carly is very funny. This morning she tugged off her wet, juicy diaper and tossed it casually on the floor. Off came her nightshirt. “Oh, no,” I said, hiding under the covers. She crawled in the darkness with me. “I’m going this way,” she said, making her way to the foot of the bed, free again. I folded my knees up under the covers. “Here comes a butt bonk,” she announced. In case you don’t know, a butt bonk is when you jump up, fling your legs straight out and crash to the bed, butt first. Carly is a master butt-bonker. Then it was up on my knees and falling as I tilted to the right. Up she climbed again, falling again, this time to the left. Later, as she was standing on her stool in the kitchen, I asked, “Carly, would you like a banana?” “No, thank you,” she replied. I looked with some amazement. “How about some pear?” I asked. “Yes, please.” Where did that come from? We say please and thank you but don’t beg or bribe her to do so. “Yes, your majesty,” I said, as she reached for the paring knife. The knife wasn’t quite right so I handed her another and she began to slice the pear into bite size chunks.

Zoom, off again, this time to Chinatown chomping on her fresh delight. 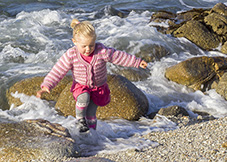 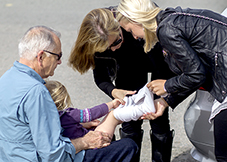 Gee, I guess it doese take a village...