When I first met Joseph Chilton Pearce we discussed how bonding creates an intimate channel of communication through which shared meaning flows. Oh, if we were only mindful of the deeper meaning of the meaning we share.

The mother's name for the object, and her emotional state are built into the structure of knowledge of the object the child creates. All without any evaluation on the part of the child.

This obvious, but not so obvious, observation opens to a much larger developmental force - state specific learning and performance. The emotional state of an experience is woven into the body and the intellectual memory of each experience. Each of the primary brain centers - thought, feeling and action - resonate an internal image or state of each experience. We call the composite image or state memory. In truth there is a separate memory unique to each major brain center. Stimulate the physical brain and the associated emotional and symbolic images-states are reincarnated, or, as we say, re-membered as a latent experience of the original event. What we abstract as thought is just that, an abstraction. What is primary is the state. Some states cripple; feeling observed, compared, judged. Some provide the optimum context for learning and performance; what we call original or authentic play in which psychological failure is not part of the experience.

From a state-specific perspective, thinking and thought are very superficial, the tip of the iceberg. But the abstraction gets most of our attention. We spend our lives justifying and defending the abstraction when the root lies much deeper, in the feelings and needs that bubble and simmer beneath the intellect, in the state of the body and emotions that gave rise to the abstractions we think; the fear implicit in comparison and judgements, for example.

Einstein observed that we can’t solve a problem at the level of the problem. Marshall Rosenberg, known for his nonviolent communication, said time and time again; don’t listen to the words, the superficial abstractions. Feel and express empathy for the underlying feelings and needs. Three of Gabor Maté, MD’s magnificent books, When the Body Says No; Scattered on ADHD; and In the Realm of Hungry Ghosts, Close Encounters with Addiction, center on the lifelong implications of state-specific learning and performance. Every word we use, every thought we think has a corresponding emotional and physical image-state associated. Stimulate one center and the other two resonate also. Much of our stress, chronic dis-ease, attention deficits and addictions are caused by the iceberg hidden or masked by our enchantment in the tip.

In terms of learning and behavior, recall that the latest brain structures are embedded in and dependent on much older emotional and physical centers. A three-foot putt is a three-foot putt. Add a few million spectators and the world championship, both psychological abstractions, and the state of the experience changes dramatically. As parents and those who care about children, our developmental challenge is for the adult to optimize their emotional state as they relate to and model the world - because physical-emotional context we experience is what the child will experience and re-member.

Emotional Intelligence comes to mind. I prefer the descriptive; state-specific-learning-and-performance. It feels more immediate, more intimate and encompasses every thought-feeling-action we experience. Being aware and conscious of the state we are creating and how this provides the context for our child’s relationship to the world that context represents a much deeper challenge than focusing simply on our abstracted thoughts and the behavior this elicits.

Appreciating what symbols and metaphors actually are, that they are not the thing they describe, is critical, least we fall again and again under the spell that each word, each thought creates. Recall David Bohm’s observation: “generally, we are not conscious of the inner working of our thoughts,” and this is true for ourselves, and more to the point, when relating with our children. But what if we were? Instead of reacting reflexively to the abstraction, symbol and metaphor, we have the opportunity to make conscious choices about the ‘state’ we are expressing and sharing with everything we do. Joe’s classic description of what language is and how it works helps.

If we look at this phenomenon of word and thing as a single unit in the brain, and this is unique to humans, so far as we know, what value is it? This is a most profound discovery. If the word and thing refer to the same sensory maps of the brain, one can be interchanged for the other. We can use the word in absence of the thing. The object is not coming in through the sensory system, but the word is.  A vibration will resonate with a previously established set of responses that will activate the pattern, just the name itself, in absence of the thing. What does the brain do? It creates a facsimile of the object. It creates the next best substitute it can and we come up with, an inner image in the absence of the exterior image. Here the word can stimulate, not the sensory motor system, not the emotional cognitive system, but the highest cortical systems of the brain, in their coordination with the other two brains. The word stimulates the entire brain system to create, out of its own processes, an image. Do you see the profound difference? The human brain is not just processing what the reptilian brain and all the other animal brains can do, but it creates an image that doesn't exist at all, in response to a name.

As the adults use all of these words, what starts happening in the child's mind? It starts responding with internal imagery in every cases that it can. And that leads us to storytelling. You will find that storytelling starts, the child responds to storytelling very early, even before they can talk. What happens in storytelling is the word, here comes the word as a vibration. Again, that's the only sensory input. And that challenges the whole brain, not just to create an image in keeping with each word, but to create moving imagery, fluid imagery that follows the flow of the words. It sets up an inner world scenario, a whole inner world scene representing the story, and in which the scene is constantly shifting according to shifting of the words themselves. This is a major challenge of the brain. The job is so enormous that the child goes into total entrainment. That is all of the energy moves into this visual process of the inner world. They go catatonic. Body stops all movement, their jaw drops down, their eyes get big and wide, and they are literally not in this world. Their eyes are wide open; they are not looking at anything outwardly. They are looking at the marvelous world that starts forming within them.

Now, I have heard people say, "oh, I can't think in imagery at all, I have no capacity for internal images."  Believe me, your brain thinks in imagery. One of the most interesting discoveries made recently, and it's, of course, I guess, still hypothetical, is the capacity of the brain to operate depends entirely on imagery. It's imagery transfer, primarily, that goes on. The discovery that even congenitally blind children think in images is kind of interesting. They find that congenitally blind teenagers can solve spatial, geometric organizational problems far better than seeing children. Why? Because they have developed such an acutely accurate, internal visual process. It's just a matter of accessing, getting at it.

Then we get into the idea, why does the child want to hear the same story over and over and over.  Because anytime a field establishes long range connections with other fields, this requires their long range axons. And it's those that must be myelinated to lock in a pattern and preserve the activities of that particular neural field and its capacities.

So, we find that once these fields, in regard to that story and that fluid connection of imagery, stabilizes, and those connections become firm, then the repetition of the story is no longer so necessary. Do they want to hear the same story over and over and over because they want to learn the story? They know it perfectly after one hearing. They will correct you if you get one-word wrong the second time. No, it's to establish this enormous challenge to the brain and all these new neural connections that are demanded.

I give the example over and over, my favorite one with this last family of mine, our little toddler, when she was about 14 months old, she was very precocious, we would tell her the three bears story over and over until I was sick of the three bears stories. And then suddenly one evening as we sat at the table to eat, and she takes a bite, and she says, "oh, it's too hot, we must go for a walk in the forest." Now, immediately, she has represented her plate of food as a bowl of porridge, and immediately, I am papa bear, here is mamma bear, and she is baby bear, and we are going for a walk in the forest. Now, what has she done? She has created an internal world, stabilized it, and then she wants to take the internal and project it back onto the external world, and change her external world according to the dictates of her own inner construction.  And here you have the foundation for infinite creation. Through story and imagination, the child discovers this great secret, that her own internal capacities of creation can modify and make a profound difference in her external world. And on that, human beings, from the very beginning, take an evolutionary leap that leaves other species far behind. 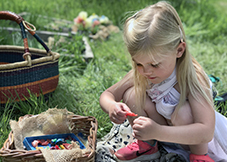