New words keep popping like popcorn. Yes, every thing and every experience has a name; ball, eat, sit, run. Carly Elizabeth, just now two years young, which is still pretty new, mastered walking upright, an astonishing feat of balance and mobility, over twelve months ago. Now she is tackling the most complex and abstract capacity in the known universe, expressing and exploring meaning with symbols, metaphors and imagination. Not only is she naming, Carly is connecting name-symbols into metaphoric phrases; ‘mommy’s coming.’ The word ‘coming’ is extremely complex; on her way, will be here soon, implying time, the future. OMG! The concept that something is going to happen is enormous. Like a Tsunami the landscape of the mind changes and with such ease, such complete playful attention that never seems to stop. We and she seem to take this amazing capacity for granted, nodding and repeating after her, ‘yes, mommy is coming,’ and it’s off to the next miracle.

Word-names can be symbols. Wikipedia: “Symbols take the form of words, sounds, gestures, ideas or visual images and are used to convey other ideas and beliefs. For example, a red octagon may be a symbol for "STOP." On a map, a blue line might represent a river. Numerals are symbols for numbers. Alphabetic letters may be symbols for sounds. Personal names are symbols representing individuals. A red rose may symbolize love and compassion. The variable 'x', in a mathematical equation, may symbolize the position of a particle in space.”And words are figures in speech, metaphors that stand for or represent something else. The word ‘mommy’ can be both a symbol and a metaphor, or both. Shakespeare’s “All the world's a stage, and all the men and women merely players…” is often used as an example.

There are concrete uses of words when the name stands for a thing; hand, chair, dog. Metaphors, however, are infinitely more complex and abstract. To leach meaning out of a metaphor we must break free of concrete associations and leap into more imaginative realms. This leap from concrete to imaginative-abstract is the essence of creative perception, the essence of creativity. Renowned physicist David Bohm described how this leap brought a total transformation in the mind of Helen Keller when Ann Sullivan associated many sensory experiences of water with the signed symbol for water in the young girl’s hand. Suddenly a concept was born. The same fire storm is now raging in Carly Elizabeth.

David writes: ‘It is clear that creative perception in the form of metaphor can take place not only in poetry and in science but in much broader areas of life. What is essential here is that the act of creative perception in the form of a metaphor is basically similar in all these fields. In that it involves an extremely perceptive state of intense passion and high energy that dissolves the excessively rigid held assumptions in the tacit infrastructure of commonly accepted knowledge.’

Come on, Michael, Carly just said, ‘mommy’s coming.’ Indeed, but the creative perception implied in this simple two-word sentence is beyond description. And this is the beginning of similar mental and imaginative flights that will define and transform Carly’s life. The big breakthrough is the emergence of ‘concept.’ Yes, the word ‘chair’ represents the physical chair and behind this representation is a concept. But metaphor takes this conceptual potential to another dimension. And this astonishing capacity for self-generated image and concept is unfolding without straining her face, gritting her teeth, and all sorts of willed intensity. Yes, she is practicing playfully, repeating, testing and refining with, as David said, great passion but also with a profound sense of freedom, freedom from judgements, failure and shame. That too is both a fact and a concept. Abstracting ideas, concepts, patterns and possibilities from concrete words and simple phrases, ‘God is love,’ for example, or ‘fundamentalists are dangerous,’ is beyond amazing.

This capacity to envision a possibility, to create an inner image of something not present to the sensory system is the classic definition of imagination. Playing with the mental images words elicit is the gymnasium that develops and expands the capacity to imagine. Reality conforms when what is imagined is unconflicted, frustration and rage are transformed by kindness, dis-ease disappears. All this potential is implicit in the nature and structure of what we call human consciousness. But we misuse and waste this potential by our incessant enchantment with false images and emotions we imagine moment by moment. Republican and Democrat, Muslim and Jew, the United States and Europe, and the one dollar bill are imagined concepts that shape reality. But we don’t treat these as the metaphors that they are. We identify with them and then fight over who is right, what is mine.

For Carly “mommy’s coming” reflects the door opening to both sides of this reality altering sword. Turn right and we become hopelessly lost in the house of mirrors our undisciplined imagination creates, in ourselves and in others. Turn left and this same capacity can be used to liberate us and others from the false realities that confuse, harm and enrage. A learned Tibetan noted that we must use the source of our confusion to negate our confusion. In other words, by applying a disciplined form of logical analysis we actively deconstruct the false opinions and judgements we have about ourselves and others, freeing both from the weight these images represent resulting in a more compassionate and authentic life. But Carly can’t do this. She has been gifted the capacity to create powerful inner images without detached objective awareness of what she is doing. On the one hand expansive, rational and powerful imagination is the developmental goal. On the other hand, unchecked, subjective and unaware imaginations create the social ego that justify, defend and exploits other egos. The Sorcerer’s Apprentice is the archetype that comes to mind. In a profound respect we are that, spell weavers who become enchanted by the spells we weave. Distilling Carly’s consciousness will come in its time. For now learning how to ride imagination’s wave is her destiny and ours.

Carly climbed to my lap this morning and looked deeply. She reached and touched my cheek, then my nose and down to my unshaven chin. ‘Pokies’ she said. Her pronunciation was sharp and clear. ‘Yes, pokies,’ I returned, pokies being the name I gave to my rough face weeks ago. Small pokies I named' baby-pokies.' The word small is abstract. Baby means new, little. On the surface, as with ‘mommy coming,’ this declaration seemed innocent enough, hardly a thing to write about. The astonishing realization was that it was days, perhaps weeks prior that I named my morning stubble ‘pokies.’ Yes, more than once but not recently. The insight is that Carly is listening to the names given long before she feels the need to say the name. This partially explains the explosion of new words.

It wasn’t that long ago that she was lying on her back. Then came the day she rolled over. Crawling followed. Next it was reaching up on her two legs leading to her first steps. Each milestone was preceded by a long period of sustained practice. Then came the breakthrough, ability and performance. We miss much of this determined, playful practice. I was deliberately naming my stubby beard ‘pokies.’ Here we have what Montessori called the absorbent mind of the child, and it is always absorbing, always preparing for the next breakthrough.

Today we pulled weeds. I wore gloves and used a long chisel to spring them lose. Carly was gifted a bakers hat, apron and mitten. She made her way to her room, retrieved the mitten, assaulted my tool box where she knew she would find several chisel like instruments and joined my effort testing the effect of each tool with her gloved hand. When asked how old she is, Carly says clearly ‘two,’ holding up all the fingers on one hand, another breakthrough in the making, counting, one, two, three. 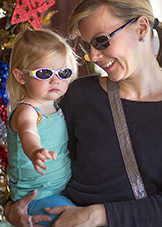