The long-view of history, with its precedents, change how we perceive, and therefore behave in the present. History is the very foundation of rational thought and science, providing verifiable feedback necessary for adaptation, progress, and evolution. Without a clear and factual view of history, we are blind. 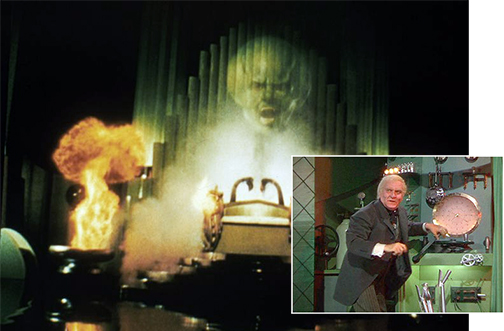 A snake oil salesman from Kansas pretended to be an all-powerful and terrible Wizard, and, over time, everyone believed it was so. The CDC, FDA, WHO, Tony Fauci, Bill Gates, and many others, including their enablers, politicians and the media, are not scientists, are not scientific organizations. They are pharmaceutical companies engaged specifically in manufacturing, promoting, and selling unproven, liability-free vaccines for enormous personal profit, often using known corrupt or fraudulent data, which is a crime. This pretense, a masquerade, has been sustained for over 150 years.

Testing Positive or Negative is Meaningless

One of the Wizard’s illusions: May 10, 2020, San Francisco Chronicle, lead story; “Antibody Test Hopes, Doubts.” Two quotes from the article. The first, a “disclaimer” from the FDA required on all the new Coronavirus antibody tests: “Negative tests do not rule out SARS-CoV-2 and positive results may be false.” In other words, the test is meaningless. Also quoted was Marin County’s public health officer; I tell them, “You will likely be negative if tested. And it either means you were not infected or you were and it’s wrong.” The test either means you were infected or you weren’t infected. This confusion is not a matter of “we need to improve the tests” or “we need to understand the immune system, virus, mutations, etc., better.” This is a failure of the very core concept of surrogate testing, which is what's being used with Covid-19. You can’t use a surrogate test EVER for diagnosis unless you have a definitive (called "gold standard") test to compare it to, and that has never been done. Period.

Without a verifiable standard, the alleged numbers; both alleged cases globally to date, May 16, 2020: 4,721,846, and alleged deaths: 313,260 are equally meaningless, especially against the global context that 57,000,000 (fifty-seven million) people die every year. In the trade, we call Wizardry - rebranding. Nearly all alleged Coronavirus fatalities had one, usually more, major chronic health condition. Understanding history makes all the difference. Invent a new name for existing symptoms, blame a new invisible, mysterious and unproven micro-beast, and Bingo, another medical-industrial, never-ending war for profit is begun – again.

It is being claimed that the alleged SARS-CoV-2 virus is the cause of the disease called COVID-19, in the same way, HIV was claimed to be the cause of the disease called AIDS. The existence and pathogenic effects of these and many other allegedly contagious and even fatal viruses – 1918 Spanish Flu, Polio, Avian Flu H5N1, Swine Flu H1N1, HIV-AIDS, Ebola, Zika, and now SARS-CoV-2, have never been proven by isolating and purifying the virus and contaminating healthy volunteers to prove contagion. Never. If you believe there is verifiable proof, please provide the scientific study. If not, demand proof from every policymaker and public health official.

From What Killed The Frogs;

They said HIV was the cause of a sexually transmitted disease called AIDS. They said 50% percent of Europe would die in several years. Proponents, researchers and drug companies were paid $562.6 billion, over sixteen years, to find a cure that never happened. Newspapers across America proclaimed that AZT had been "proven to be effective in HIV antibody-positive, asymptomatic, and early ARC patients." The decision to approve AZT was the fastest on record, based on a single study that has long been declared invalid. 20,000 people were taking AZT at a cost of $8,000 per patient per year. Dr. Anthony Fauci owned some of the patent rights of AZT and pushed to expand prescriptions. The toxic effects were so severe that up to 50 percent of all AIDS and ARC patients had to be taken off it. Many died. The alleged science was wrong, but researchers like Fauci and his colleagues don’t talk about that anymore. HIV does not cause AIDS, nor is AIDS sexually transmitted, but most still believe this is true, just like most people believe what the same people are claiming about COVID-19 today. 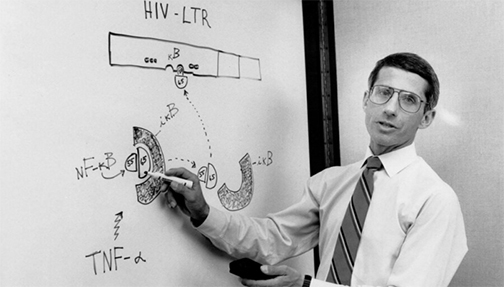 After George Herbert Walker Bush, Sr. left his CIA director post in 1977, and before becoming vice president under Ronald Reagan in 1980, he was on Eli Lilly's board of directors. As vice president, Bush Sr. forgot to disclose his Lilly stock and lobbied hard on behalf of Big Pharma—especially Eli Lilly. It was during Bush Senior’s administration that Tony Fauci took center stage in the HIV-AIDS fraud. 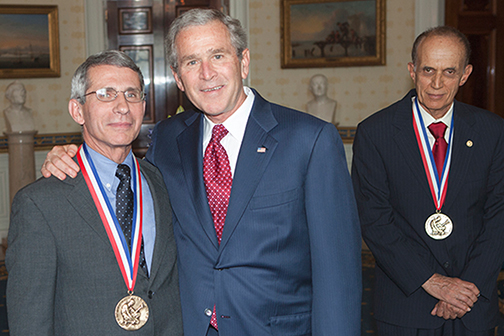 Coincidently, just before President Bush Jr. signed the homeland security bill into law an unknown member of Congress inserted a provision into the legislation that blocks lawsuits against the maker of a controversial vaccine preservative called "thimerosal," used in vaccines that are given to children. Drug giant Eli Lilly and Company make thimerosal. (See Robert F. Kennedy Jr. on thimerosal and how it harmed tens of thousands of children.)

If there is one person who is the face of the current strategy of dealing with the coronavirus in Washington it is the Director of the US National Institute for Allergy and Infectious Diseases (NIAID) of the NIH, Dr. Tony Fauci. Tony Fauci has held the top post at the NIAID in Washington for an astonishing 36 years. Today he is well past retirement age at 79, and holds the funds to determine which drug companies or university researchers will get precious government funds or not from NIAID’s annual $5 billion budget.

Fauci has more influence over US national policy on the unprecedented Covid-19 pandemic than anyone, including the President. Much of the media treat him with awe as an unimpeachable scientist, one of the world’s finest. A closer look at Anthony Fauci’s career gives a starkly different picture, a very alarming one in fact.

Let’s go back to 1984 when Fauci was named head of NIAID during the Reagan era. That year an AIDS researcher, Robert Gallo, working under Fauci, held a press conference to announce that he had “discovered” the AIDS virus. He said it was HIV- human immunodeficiency virus. The shocking announcement which went around the world was in complete disregard of scientific procedures of prior peer-reviewed published scientific evidence, including the required electron microscope analyses. It was a case of “science by press conference” as a critical scientist, Prof. Peter H. Duesberg described it. Duesberg was an award-winning researcher at Berkeley who isolated the first cancer gene through his work on retroviruses in 1970 and mapped the genetic structure of these viruses.

For Gallo and Fauci, that was unimportant as millions in research funds flowed into NIAID to research the new virus, HIV. Fauci and Gallo claimed that AIDS was highly contagious, also by sexual transmission, especially among homosexual men. Notably, before the Gallo claims to have found the HIV AIDS virus, NIAID had been doing research on the role of drugs, poppers or nitrites, proven immune-suppressants, in the deaths of the earliest AIDS patients. That was quickly dropped in favor of researching a “cure” for AIDS.

Media was told that AIDS was the “public health threat of the Century.” Gallo went on to make millions on his patented blood test for HIV, despite the fact that the test was often giving false positives and did not test directly for the alleged virus but for active antibodies, something immunology practice said was not valid, as antibodies merely suggested a past infection response and not necessarily presence of AHIV. At this time in the 1980’S, Fauci was responsible for AIDS research at NIAID, a post he still holds.

The issue of HIV/AIDS tests is central. While a frightened world was clamoring for a test, Gallo and Fauci promoted their deeply flawed tests of antibodies. In 2006 Gallo claimed, “HIV tests were highly accurate from the time they were developed in 1984 and have become much more accurate over time…” Highly accurate in 1984 but more accurate than highly over time? Gallo added in response to criticism, “A PCR test for the presence of the virus itself can accurately determine a child’s HIV status.”

In a sharp rebuttal of the Gallo claims, claims endorsed by Fauci and the NIAID as well as CDC, Roberto A. Giraldo, MD, and Etienne de Harven, MD, the scientist who produced the first electron micrograph of a retrovirus, pointed out that both the ELISA and Western blot and a genetic test, the PCR or ‘Viral Load’ test,” the two major tests used to determine if one has AIDS, are invalid. “None of these tests detect the HIV virus itself, nor do they detect HIV particles.” They add that there are “more than 70 different documented conditions that can cause the antibody tests to react positive without an HIV infection.” Among the false-positive cases are influenza, the common cold, leprosy, or the existence of pregnancy. The same tests are used today to determine SARS-CoV-2-positive. 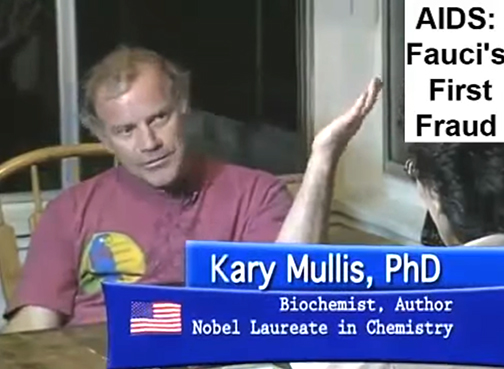