Carly sat in the dry riverbed scratching an imagined icon in the sand with a stick. “It is getting late and I need to go back home,” I said twice. “No,” she said in her bossy-mean way. “OK, by-by,” I said and continued walking up the dirt path until I was out of sight where I sat in the shade and waited.

We spent most of the day wrapped in ‘Carly-time,’ that special meditation where the usual thoughts, agendas and schedules are suspended. Like surfing we ebb and flow, walking through the fairy store across the street, then to the park, fixing mac-and-cheese. A few days ago Carly tossed quite a fuss. It was time to get ready for bed. “Carly, it is time for jammies,” I said. “No” she replied shapely. “It’s time for jammies,” I said, again. “No,” this time even more emphatic. “Don’t do this,” I countered, as she walked out of the room. I followed. She ran faster. “No!” she yelled, and began to cry. “Fine,” I said, handing her the jammies. “You put them on and when you are ready, we can read some books together,” and I walked out the room. As I said long ago, never pick a fight with a toddler.

I waited down the hall. In a few moments, Carly came out without her jammies. “I want Mama,” she cried. “Mama is taking a shower.” In the same crying breath, “I want Barbora (our au pair)!” “No, Barbora is getting ready for bed.” With each cycle, Carly escalated her intensity. By now, she was very upset. I picked her up and she cried even more intensely as we walked to her room. “This is silly, I said, we put on jammies every night before reading books.” At this point, Z felt compelled to intervene, which to me meant Carly got exactly what she wanted, not a good precedent. A few minutes later, she was in her jammies yawning as we turned the pages.

What was strange about this mad-moment was that it really had little to do with jammies. The ‘no’ came out of the blue. Once committed, Carly had a hard time getting free, that is slip into another state. I wanted to ride the tiger with her until the wave crested. No such luck this time. And there is more.

I know Carly understands much more than we generally give her credit. A mad-moment like this etches deep. She knew it was not good for her or for me. Two mornings later, Carly woke early and slid into Barbora’s room, announcing, “I’m a good girl today.” There was no blaming or shaming during her mad-moment. No one said she was bad. She understood that the dynamic was not good and by her morning pronouncement, seemed to take some responsibility. We were shocked by her spontaneous gesture.

Two days past, which brings us to the riverbed today and Carly’s sharp No!, again. Earlier, as we crossed the same spot, Carly found a flat oval rock, about the size of my old flip-phone, that I still use. “Beep, beep, beep,’ the phone rang as she pressed the invisible keys on her rock-phone. “Hello,” she said. “Yes, we are walking to town. By, By.” This play went on. The phone beeped again and she answered. I called her rock-phone with my imagined phone and we had a brisk exchange. She slipped the phone in her shoe, as if it were a pocket, but it feel out. Then in landed in my pocket.

Using a flat rock as a phone is a classic example of symbolic-metaphoric processing that has exploded with language during Carly’s second year. This is, as Joseph Chilton Pearce described so often, the foundation for all higher, meaning abstract, mental capacities. The word, creating a mental image of something not present to the physical senses, and with that image ‘concept’ is born, and building on that emerges what we call culture, science, the arts and causal-creativity. By causal-creativity I mean the capacity to interact with and modify reality; for example fire not burning and distant healing. This is the foundation Carly is developing as she draws forms in the dirt with a stick, talking to herself as she does. It has been a long afternoon of Carly-time and I needed to hike up the hill and get back home. Her sharp “no” did not meet my need. As with the jammies incident, I repeated my position. “Ok, by-by” I said and walked on, leaving her in the riverbed.

As I sat in the shade waiting, what happened next was breathtaking. In less than two minutes, Carly came after, holding her stick. “This is for you,” she said, handing it over along with a lovely hug. “Thank you. I love you,” I said, “but I don’t like it when you get mean and say no.” “I know,” she said, which was the meaning of the stick, another symbol, metaphorically saying, “mad moments don’t work very well, but they happen.”

Today, Carly’s afternoon nap was a brisk fifteen minutes, not her normal two hours. As the afternoon wore on at her intense play-pace, it was clear that she was a bit bouncy and crash prone. She cried in the tub, which is almost unheard of. And here again, came that insistent ‘no’ when it was time for jammies. (Do I detect a pattern here?) When it persisted, I placed her jammies on the bed and said, “When you are ready we can read some books,” and I left her alone. She sat on the futon for about ten minutes reading a book, then came to my office. “Time for books?” “Yes,” she said. “How about a pee-party before,” I asked. “Remember the wet-soggy diaper this morning? Pee-parties help.” And we did. Next came the jammies. We crawled in the big bed and snuggled. “I love you as big as the sky,” I whispered, and in a blink she was fast asleep.

Carly is learning tremendous lessons about herself and others when mad-moments like these pop out of the box. I explained, while wiping her tears in the bath, that not resting makes us grumpy. “I get grumpy when I need a rest. This is what grumpy feels like,” I said. She nodded, taking everything in beneath the level of conscious (thoughtful) awareness. That is where the real learning takes place. It is the experience that matters, much more than the explanation.

My love and respect for Carly is as big as the sky and that is pretty darn big.

In a few weeks Playful Wisdom will arrive, featuring a forward by Gabor Mate MD, and treastures from Joseph Chilton Pearce and bev Bos. Our challenge is reaching parents early. By the time they are pregnant the snowball is already rolling down the hill. Playful Wisdom is a perfect gift from midwives for both fathers and new moms. What other ways can we reach new and expecting parents? Please send along your thoughts.I’m asking everyone who has benefited from the labor of joy called Touch the Future to order an advanced autographed hardbound edition of Playful Wisdom, and I will send an additional soft cover book for you to gift to a new mother or father. You keep the autographed hard cover edition and give the second to someone you love. Please. This is paying forward at its best. 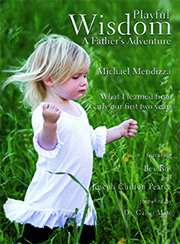