What if the way we treat our child is the way our child will treat the world? And what if you and I are not all that different from other parents so our child is like theirs and that is the way the world will be?

Forty years ago Joseph Chilton Pearce described the ‘model imperative.’ Of the near infinite potential implicit in our design we recognize and develop on those capacities that are modeled. Individual human development is model dependent. As above, so below. In modern parlance we might call this the epigenetic effect. To a profound degree it is the model-environment that sculpts human development. If we really understood this we would place the vast majority of our attention on optimizing the model which will naturally, without effort, resonate spontaneously in our children. Instead, we ignore, for the most part, the often dysfunctional model we represent and bribe conformity with various forms of punishments and rewards. Strange? The hero’s journey is one of breaking our identification with a toxic culture, and unfortunately all cultures are more or less toxic, so we can turn around and incarnate a new culture and parenting is the pot where this transformational alchemy takes place.

It is Father’s Day, a time to reflect and, of course, the same is true of Mother’s Day. Recently I was in a pool with Carly, my hands supporting her tummy as we splashed. And as we did, emerged a flashback of my father’s hands holding and encouraging me in the same way along with all the emotions I felt at the time, the fear and the excitement all mushed together. Ah, this is what it means to be a father. Then, like dominos falling, it was revealed how there were thousands of similar silent moments of care and nurturing that helped me discover and become who I am, silent because these moments are not part of our cognitive-intellectual memory. And yet, these everyday moments are what make us what we are. With that flashback came an abundance of affection and appreciation for years and years of giving that remain in me mostly unnoticed and unacknowledged. With this revelation came also the realization that this awakening of appreciation for my mother and father that moment, both as wonderful and limited as they were, resonated with them like a prayer as Carly kicked her tiny feet and laughed. Thank you for all those moments, I whispered to myself.

People comment on how calm Carly is even though she is constantly active. Yesterday she was in Monterey, playing on the beach, riding the Trolley from Fisherman’s Wharf to Cannery Row, and in the afternoon it was the Monterey Bay Aquarium, riding the escalator mostly, a hangover from the international airports just a few weeks past. I say this simply to illustrate how ‘on the go’ she is. It is a three and a half hour drive from our home to Cannery Row in Monterey, California and she does remarkably well, sometimes better than Z and I, and Carly is not quite two years young. I find her capacity astonishing. Not because she is ‘my kid.’ Rather, Carly Elizabeth is a representative of the explosive sensitivity, awareness, attention and active curiosity about everything that is uniquely human.

As the developmental clock would have it language is in full bloom. Carly sings the notes for ‘twinkle, twinkle little star.’ She mimics complex word-sounds. Her vocabulary grows daily; mama and tata, wow, oh-la-la, happy-happy, up, hot, yes, of course no, the names of friends… As I was writing this, Z sent a list of Carly’s first words, synchronicity, about seventy, expressed in various stages of clarity and diction.

The director of the Center on the Developing Child at Harvard University notes that a baby forms 700 new neural connections per second the first years of life. It is the back and forth interactions with adults and the environment that shape the developing brain. “We begin to see differences in the size of a child’s vocabulary as early as 18-24 months.” “These differences,” he says, “are not genetically hardwired. They're based in the differences in the kind of language environment the child grows up in. If early intervention doesn't happen, a child will struggle with language his or her whole life.” Yes, that is true. But wait, Einstein didn't talk until he was four.

The generalization that a child must have a certain vocabulary by a given age can be misleading. Sure there are statistical averages, but we compare too much. Carly is doing just fine. I refuse to have a quota or even encourage her too much. It is the model that shapes development. The richer and more playful I can be the more natural and freely Carly will grow, not conforming, rather like a flower in a beautiful garden. Sometimes I slow my speech and emprise the ‘S’ at the end of yes, but always with a playful feeling. That is the key. Real learning is play and play is real learning. What we call serious is forced and often with implied judgment. Real play is extremely serious but free, spontaneous and intrinsic. The silent moments of Fatherhood are overflowing with lighthearted seriousness. 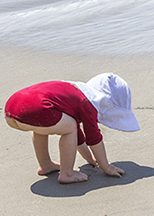