a fever (such as malaria) marked by paroxysms, chills, fever, and sweating that recur at regular intervals.

The blackberries were ripe and in the hot afternoon, and Laura went with Ma to pick them… Mosquitoes were thick on the big, ripe berries slacking the sweet juice. They liked to bite Laura and Ma as much… One day Laura did not feel very well. She felt cold even in the sunshine and could not get warm by the fire…. “I don’t feel too well myself,” said Pa. “First I’m hot and then I’m cold…” Mrs. Scott, the fat woman, said that all the settlers, up and down the creek, had fever ‘n’ ague…. “All this sickness came from eating watermelons.” She said, “I’ve said it a hundred times… one of the settlers has planted watermelons in the creek bottom and every soul who had eaten one of those melons we down sick this very minute.” She said that she warned them, “but no, there was no arguing with them. They would eat those melons and now they are paying for it.”

In the future true science will say the same about the current story, science; not captured agencies, not politicians, not garbage-in-garbage-out modeling; not corporations positioned to profit $billions, not bureaucrats who are told they will have blood on their hands if they don’t believe and do what they are told.

What we call ‘news’ is a show. Lessons from QVC:

Produce a long-form commercial (a given POV, propaganda) that looks like a traditional program (information, documentary, news), broadcast the show, gather feedback to determine which parts of the story triggered the desired behavior or results (a purchase, social distancing, wearing a mask, standing in line for a flu shot), revise the script to enhance what worked and negate what did not, broadcast the revised show, measure the increase in positive responses, repeat the cycle, plot how the desired impact of the ‘show’ increased the desired result with each revision.

The current show is a dress rehearsal for the next show. Understanding this, always ask; who wrote the script? Within a long-form dress rehearsal context, individual events, and the stories told about them, are like dominoes stacked in a row. How the last domino in a sequence will fall is predetermined before the first is tipped. 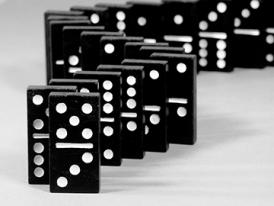 This ‘world-in-crisis’ story is a dress rehearsal sequence. The last domino is predefined.

The recent binge of mandatory vaccination legislation, without informed consent, in violation of the Nuremberg Code, was a dress reversal for this, the next show: I predict that in due time the global population will not be allowed to go to school, get a job, open a bank account, attend public events, enter public buildings, shop a local market, collect social security, travel domestically or internationally, without first displaying proof that they are not infectious, with this current phantom or any future invisible, unproven, phantom, that is alleged, with each requiring its own vaccination and micro-chip certificate. For a peek at Silicon Valley’s vision of our future see. 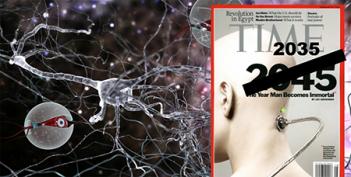 Where do we go from here?

To answer that question each individual must be intrinsically and genuinely open to the possibility that the current crisis is not caused by eating watermelon. From this openness to invite and explore a new paradigm, its implicit curiosity and genuine inquiry, follows:

Tyranny, oppressive power exerted by government, and treachery, the act of willful betrayal, never yields easily what has been easily taken. What has been lost must be regained through awakened intelligence, moral clarity, sustained and compassionate education, and now, global unity in action.

One table pretty much tells the true story:

Death rates in the United States have been going down, not up, since the beginning of the year.

We are told that 37,308 people have died this year from COVID-19 through April 18, yet actually 45,522 fewer people have died this year than last year during the same period of time. Not only has overall mortality for the United States been going steadily downward since January, but mortality has been substantially lower this year than last year. Weekly mortality statistics for the United States from the Centers for Disease Control:

Sheltering in place, masks, closing business is counterproductive. It diminishes the immune system.
Hospitals are empty. Doctors and nursing staff are being sent home.

Social Distancing May Worsen Epidemic Outcomes
Compulsory Masks Wearing a mask is a public display of compliance, sustained fear and obedience. It promotes and sustains popular fears and suspicion that everyone is potentially infectious, which justifies the Gates agenda; mass vaccinations and the micro-chipping personal-global surveillance. Masks are a dress rehearsal for the next step.

The Losers Are:
Pandemic Causes Highest Unemployment Since Great Depression 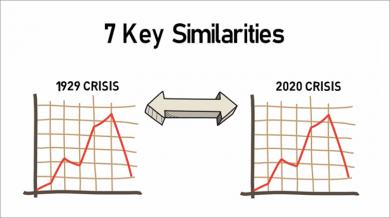 The U.S. unemployment rate may skyrocket to 32.1% in the second quarter of 2020, according to the Federal Reserve Bank of St. Louis:

With Millions Unable to Pay for Housing Next Month, Organizers Plan the Largest Rent Strike in Nearly a Century By Natasha Lennard, The Intercept 25 April 20

The Winners are: Under COVID-Cover

Like the Troubled Asset Relief Program (TARP) signed into law in 2008 to address the subprime mortgage crisis, the main winners in the current Coronavirus Stimulus Package, by a power of 10x, are the large banks and Wall Street.

In an effort to help curb the economic effects of the coronavirus pandemic, Trump signed a coronavirus stimulus package called the Coronavirus Aid, Relief, and Economic Security (CARES) Act. The CARES Act is the biggest rescue package in U.S. history with a staggering price tag of $2 trillion. The legislation seeks to provide emergency financial assistance to people and businesses as the coronavirus crisis continues to have major effects on the job market and economy across the U.S.

About 75 publicly traded companies, some with market values of more than $100 million, received a combined $300 million in loans from the program, according to the Associated Press. Eight of the companies received $10 million apiece, the maximum loan amount.

It’s not the watermelon. The same can be said of the false disease theory; “HIV causes AIDS.” “AIDS is sexually transmitted.” “We need a new vaccine to prevent AIDS.” When this is said, one generates a look of ‘condescending puzzlement.’ After verifying that there were no scientific references to show that “HIV is the probable cause of AIDS”, Mullis (Nobel Prize winner, 1998) publically described that this fact is one of the greatest scientific scandals of the 20th Century, until now.

I’m not saying there is no dis-ease. Of course, there is. They don’t call it the cold and flu season for nothing. I’m saying that the symptoms being expressed don’t come from eating watermelons. Not accepting the belief that eating watermelons is the cause of the disease, without ‘real scientific proof,’ opens the door to a completely different set of questions, actions, and outcomes. 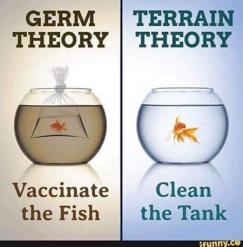 We become victims by accepting, by not questioning and by being complicit, obedient. It is the responsibility of each individual to see for themselves that the world is, indeed, round, and in that way, uplift and transform others by the example they set.