I will do it myself

Row upon row, names and words stack like Legos in Carly’s expanding brain. They connect, form bridges, roads, creating castles, places to visit and to hide. We don’t see them but she does, building blocks for her future. Story time and briefly for meals is the only time Carly sits still. No hyperactivity here, not a drop. Life is opening and unfolding before her eyes, fingers and toes. No time to waste. There is another adventure right here and over there.

With her blossoming imagination comes invention, intention and drive. Yesterday, Barbora, twenty, our friend Joseph, seventyish, and Carly, nearing thirty-one months, went to the park. “I’m going on the BIG slide,” Carly announced. Joseph reached down to hold her hand as they approached the slide. “No,” she said. Carly walked Joseph to the park bench near the playground and pointed. “Here,” she said. “You sit here. I will do it myself.” Some might describe her tone as bossy. It was certainly clear and direct. She had a vision, an idea and was driven to see it through. Stand in her way and you are asking for a fight. Oh, my, what happened to the cuddly, passive bundle of joy that slept a lot? Gone with the wind, never to return again.

Spring was in the air. The sun was warm and the air cool. Carly and I jumped on our bike, her seat nested between the handlebars. We adjusted her red helmet and down the drive we went. “No, she cried, “I want to go home.” She said the same thing at the same spot the last time we peddled down the lane. “No,” she cried again. “Why,” I asked? She began to sob and repeated, “I want to go home.” Ok, we will ride around the block,” I whispered, “slowly.” “I won’t fall,” she said. “No, Carly, I’m right here next to you,” tapping her helmet three times. “I won’t fall,” she said again. “No, I promise.” “You promise,” she said. “I promise. Do you feel better,” I asked. “It is important that you feel safe and happy.” “Yes,” she said. “I want to feel safe and happy too,” I said as we turned the corner and approached our drive. “Is it OK to ride to the river and have a picnic?” “Yes,” she said, and we did.

This is all part of what many call the terrible twos. Why is vision, clarity, being direct, passionate and driven terrible? Well, for one thing it might not be practical, or possible, convenient or safe. How inconsiderate of the little darling to not consider all these possibilities, and what about me? I have my own ideas that feel very important, that I feel passionate about too, like pushing the bike up a dirt path in the hot sun. No, Carly discovered a sand box on the path, except there was no box and it wasn’t sand, more like extremely fine dust, maybe quicksand.

There she was grabbing handfuls of dust and letting it pour through her fingers like fine sand in an hourglass while I was pushing the bike up the hill. “Carly,” I said. She did not hear me or pretended she didn’t. Actually, both are true. Yes, physically, she heard my voice, but, we forget. Carly is enchanted. She is a child of the dream where our often highly abstract adult concepts are nothing more than sounds, like the wind in the trees or the bees buzzing. She needs to decode our symbols and metaphors before they have meaning. That takes attention a dreamer doesn’t have. “Carly,” I said a little louder. She looked up as she continued to sift but it was only my voice she acknowledged, not my intent. Then came the insight. My vision, passion and drive was to push the bike up the hill. Her vision, passion and drive was to experience as much as possible as we walked up the hill. Carly’s vision was vast and open-ended. Mine was narrow and really, very limited, exclusive, as in excluding, excluding everything that was going on except the bike moving up the path. I didn’t notice the sandbox of quick sand, or the flowers or the lizards doing pushups, or the sound of the birds, but she did.

The local Waldorf School had an open house. Stephen Spitalny, a Waldorf kindergarten educator for twenty-four years, which is a long time in kindergarten, and now an early childhood consultant shared a few thoughts regarding discipline. When adults think of discipline, it’s nearly always focused on changing the child’s behavior. Stephen redefined discipline by flipping it around and focusing on the adult’s reaction to the child instead of the child. I love that.

The young child, and that can be all the way up to pre-teen, does not live in the adult’s abstract-verbal-intellectual world. They live in an experience-based world and what they experience is how the adult behaves, much more than what they say. Discipline has two meanings; punishment-correction and self-control or mindfulness. Discipline, Stephen offered, is an adult practice of behaving, reacting to the child, in a way that they and we would be proud to copy or mimic because that is how children learn. He went on to describe how completely different the childs’s developing brain is from hopefully the mature adult brain. A great deal of conflict, anger and tears spill over from this mismatch. Part of the adult’s discipline is to be mindful of this mismatch and to adapt the response to match the child’s experiential needs. The fewer and more concrete feeling-words the better, adult feelings, that is. The key is not to judge or blame the child, rather to focus on how the child’s behavior feels inside the adult or parent. “It scares me when you do that.” “I think Johnny is very sad when someone takes his truck.” “Carly, it is hot in the sun. I need to be in the shade.” Being simple, clear and honest with how we feel builds trust, models empathy and mutual respect and that mends conflicts now and into the future, not blame or punishments.

In a wonderful way, Stephen affirmed my experience with Carly playing in the dust. Her attention, and therefore reality, was completely different than mine. Had I acted (reflexively) on my impulse, “Carly, hurry up!” a reaction already charged with conflict – conflict is what I would create, blaming Carly for what I was doing. How many times does this happen, every day, around the world?

Fortunately, for us both, I caught what I was doing and this flash changed everything, something Carly could not do. Instead of a fight and tears, I looked at myself as a reflex. “Was it really that important to push the bike up the hill this very second?” Obviously not. In that pause, I learned something about myself. I became more aware of what is going on inside me 24/7, and this self-awareness allowed me to respond to Carly in a much better way. She learned what she needed to from dust and I learned about myself, how to be more present, empathic and aware. Yippee for us both.

Later, I applied this to the way I relate to the world. As we all know, the world is in a big mess; the environment, economic disparity, basic health and wellbeing, poison food and water, religiously and politically. These messes are all caused by people who were once children. The mess in the world is a mirror of the mess in us, how we were treated as children and therefore, how we treat the world. By treating Carly differently, the hope is that she will understand who she really is and that will change the world, one child at a time. While at the Waldorf open house, a new video was shown, Waldorf 100 Years; parents, educators and children all over the world being excited, optimistic and creative together. That is what being with children does. It renews us. We remember what we have forgotten watching the terrible news and all but a tiny sliver of news is terrible because shock and trauma sells. Watch Waldorf 100 Years and you will remember who you really are too.

Preparing supper, Carly reached into the cupboard and discovered a bit of chocolate. “I need chocolate for dinner,” she said. My offering of peas, corn, steamed carrots, fresh bread dipped in olive oil and balsamic suddenly dimed. “Let me cut a piece,” I said, holding a knife. She pulled her white step stool near and watched as I cut a (small) piece for her and one for me. “We will have another after dinner,” I said, lifting her to the table. We shared the peas. She gobbled the corn and nibbled at the dipped bread. We played sword fighting with the steamed carrots and drank some coconut milk. “I’m all done,” she announced wiggling from her chair. She scooted her step stool to the sink, reached for the bit of chocolate and my knife, which at thirty-one months she knows how to handle quite safely. “It’s time for chocolate,” she said, and it was. 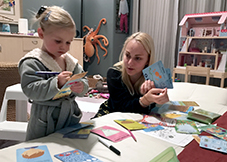