This gift we are given

Planet Earth is a tiny speck in the galaxy called the Milky Way. Traveling at the speed of light, rough estimates suggest it would take 100,000 light years to traverse. Do consider that a light-year, the distance light travels in a year, is roughly 5.9 trillion miles. Like a ship in an empty ocean earth bound astronomers can peer 13.8 billion light-years in every direction. This places the Milky Way, and our tiny speck, inside an observable sphere 28 billion light-years in diameter. Even this is deceiving. The universe is expanding. Some estimate the diameter of the observable universe to be, more or less, 92 billion light-years.

I feel pretty important looking from the inside out. This fades quickly when looking at me from outside in. I wrote to my sons, one in his thirties and the other in his forties, describing my breathless wonder - appreciating the invisible strings, or whatever it is, that connects us forever. Carly, now three and a quarter, piled all the pillows she could find on our bed. She took my hand. We ran as fast as we could and jumped…

The amazing experience of seeing, touching, feeling, wondering and now, sharing all this is a tiny part of what Albert Einstein called The Mystery. I am beyond myself with gratitude for this gift we are given. His Holiness Tenzin Gyatsho The XIVth Dalai Lama of Tibet said it nicely when he declared; we can do without organized religions. Strange, said some, coming from an international spiritual figure. No, he replied. While it is true, I am the spiritual leader of Tibet, more deeply I am Tibetan and more deeply than that I am a human being and more deeply still, I am life.

Looking up at the crescent moon this Thanksgiving Eve helped me keep this in some perspective. Then Carly took my hand and we ran as fast as we could…. 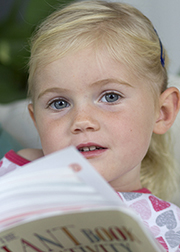