Fighting Back, Forgiveness, Hope and Cynicism

There's something happening here
What it is ain't exactly clear…

It's time we stop, children, what's that sound
Everybody look what's going down

It's time we stop, hey, what's that sound
Everybody look what's going down.

In 2010 I interviewed Barbara Loe Fisher, Founder of the National Vaccine Information Center on vaccine mandates and informed consent.

For the last 30 (now 40) years my organization and others have been doing this work to raise public awareness about the fact that vaccines are not as safe as doctors have been telling us they are. More parents are realizing that when they take their children in to be vaccinated and then their children regress into poor health, that there is potentially a connection with the vaccines their children have gotten.

There is a rising level of consciousness. Parents are realizing that what they’ve been told to believe about the safety and effectiveness of vaccines is not entirely true. And once that happens, once you’ve been a believer and have been told that vaccination is going to save your child, protect your child from getting sick or dying, and you realize that you haven’t been told the whole truth, the trust is broken. That sacred trust between the physician and the patient, in this case between the doctor and parent, is fatally compromised and that parent is never going to trust doctors in the same way again.

I’ve sat on a lot of government advisory committees. I’ve been at the table with manufacturers, with public health doctors, with doctors from academia and I have said, “You need to wake up and realize you cannot continue to deny what is happening because you don’t want to believe that it is happening. You have to listen to the parents!” So far, they have refused to listen.

Now they’re taking the big hammer out. When parents come in with questions about vaccine risks or want to vaccinate in a different way, that is not to use every vaccine or not vaccinate at all, the hammer comes out and a doctor is basically saying, “Either you do it my way or hit the highway!”

We now have parents contacting the National Vaccine Information Center saying that they are losing their health insurance. They are being thrown out of HMO’s if they will not vaccinate according to what the HMO says. We are seeing healthcare workers lose their jobs if they will not agree to take a flu shot. And it’s not just the healthcare workers, who have direct contact with patients, it is anybody in the hospital or medical facility even if they don’t have one-on-one contact with patients.

I predict the teachers will be next. You will see it going across the board that all public facilities are going to try to force every American from the age of six months through the year of death to get a flu shot. If public health officials and doctors can accomplish that, it will set the stage for the 125 new vaccines now being tested in clinical trials that the drug companies want to get licensed and, of course, want to have an assured predictable market by getting them mandated. 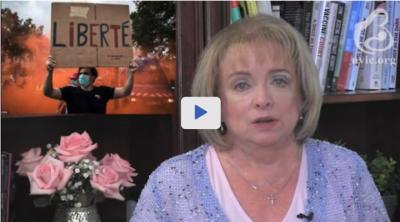 In perhaps the most powerful, passionate, and informative presentation of her forty years, Barbara describes how Forced Vaccination Was Always the End Game. Please do take the time. Packed with 40 years of insight.

“It's time we stop, children, what's that sound. Everybody look what's going down…”

As long as the Candle Burns…

Dan Rather on a time for atonement (to repay for wrongs done or injury), repentance (reviewing one's actions and feeling regret for past wrongs, which is accompanied by commitment to and actual actions that show and prove a change for the better), and forgiveness (the release of resentment or anger).

I have long felt that, regardless of one’s faith, finding occasions for self-reflection, where you confront your own failings with honesty and clarity, is a necessary and worthy exercise.

We are living in a moment of particular rancor, when anger, fear, and despair are widespread, and for good reason. We can see selfishness run amok, a selfishness that is proving deadly in a time of a pandemic and increasingly with our climate crisis. We can see cruelty towards others taking hold, fueled by a toxic brew of ignorance and hatred centuries in the making. We are witnessing lies weaponized into an assault on our ideals of a pluralistic democracy. We see women being denied agency over their own bodies. We see historical truths being denied and false narratives flourish.

In such a state it is natural to try to sort ourselves between “us” and “them.” It is understandable that we wish to castigate and ultimately defeat the purveyors of our societal ills. But from my limited understanding of Yom Kippur, what is asked of that day is not to dismiss or deny all that is wrong about the larger world, but to take a pause from looking outward and shift to the hard work of looking inward. With humility, we must understand that all of us are flawed and in need of improvement. And it is in that spirit that I wanted to create a space for our discussion today. With grave dangers afoot, it is too easy to absolve ourselves of our own actions, big and small, that harm others.

“It's time we stop, children, what's that sound. Everybody look what's going down…”

The Positive Side of Cynicism

Believing or showing the belief that people are motivated chiefly by base or selfish concerns; skeptical of the motives of others.

My wife shared an essay that Republicans are already disputing the 2024 election, and that, if not indicted and sent to prison, Big T will be on the ticket, a Constitutional Crisis. To which I replied:

No one who really ‘knows’ Trump would vote for him. They are all pirates, onboard for the booty. And those who do ‘believe,’ do so because “Big T” inherited the massive propaganda machine Reagan and the Christian Right set into motion by abolishing the Fairness Doctrine.

I consider popular politics in the same vein as football; the 49ers vs the Packers, a form of entertainment (distraction), like a daily soap opera, “As the World Turns.” Just read the headlines any day and you will see. The big difference, like the Super Bowl, the winning team gets to steal the money and give it to their corporate friends of choice; big pharma, big tech, the military-industrial complex, CIA, NSA, or the WHO, as is the case with Gates, so the Big Win is no longer controlled by politics. It is a great scam, but too much trouble, ie., Rockefeller, Soros, Gates, Zuckerman, et.al. The political mafia escalated to the next floor up, non-sovereign corporate-technocratic stealing from the commons. Way better.

What sounds like extreme cynicism becomes, just facts when we consider that there is more than one ‘game,’ or ‘level’ being played, each with its own virtual reality and rules. Popular Politics is, in my view, theater. Like playing Monopoly, the players and the money on the board have value only while on the board. Step out of the game and money loses its perceived value and becomes just scraps of paper. While engaged and involved in the “Popular Politics Game,” like rooting for the 49ers, all the arguments for and against are ‘real.’ Go up a level or two, and success, or winning, is scored by very different values. Politicians are actors cast in the “Popular Politics Show.” And yes, they do have tangible influence in the ‘control of populations and who gets to steal the money game,” while we ‘believe’ in the game.

Below are the ‘very best’ We the People could muster: 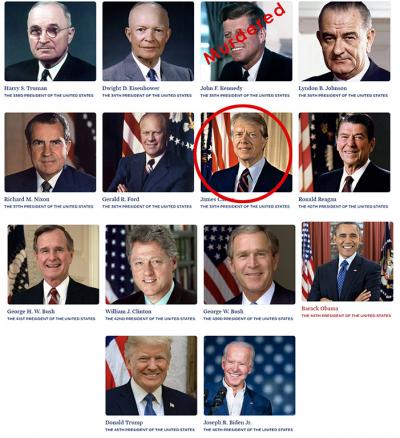 Truman dropped two atomic bombs incarnating 200,000 people in Hiroshima and 40,000 in Nagasaki, plus countless others in the years after. I don’t know much about war hero Eisenhower, except that he mentored and set up Ronald Regan, and that changed the course of history. JFK and his brother were murdered by the others. Johnson’s image speaks for itself. Nixon, remember Watergate, pardoned by Ford. The only mug shot I’m not suspicious of is Carter. Look what Reagan did to him, Iran-Contra. Bush senior ran the CIA. Clinton flooded our inner cities with ‘crack’ and was Epstein’s sex partner. Then we got George and Dick (Cheney), now, that was a pair, along with 9/11, the Patriot Act, still in place, and the failed, but very profitable War on Terror. Obama worked for Wall Street, not we the people, handpicked to paste a smiley face on the Bush-Cheney agenda. Where did he come from, anyway? Nice shot of Trump? And Joe, how can anyone not trust him?

Cynicism is a school of thought of ancient Greek philosophy as practiced by the Cynics. For the Cynics, the purpose of life is to live in virtue, in agreement with nature. As reasoning creatures, people can gain happiness by rigorous training and by living in a way that is natural for themselves, rejecting all conventional desires for wealth, power, and fame.

The definition of Cynicism is an attitude of suspicion where you believe the future is bleak because people are acting out of self-interest. A cynic may have a general lack of faith or hope in people who are motivated by ambition, desire, greed, gratification, materialism, goals, and opinions that a cynic perceives as vain, unobtainable, or ultimately meaningless.

When those motivated by ambition, desire, greed, gratification, materialism, and ideology hide these motives, professing patriotism, while personally profiting from war, Tony Fachi, Gates and Monsanto, are great examples, seeing their true motives, instead of the propaganda, is the positive side of Cynicism.

Cynicism is a form of discontent, and discontent is the awakening of inquiry, a movement for deeper, truly empathic, compassionate, and sustainable values in action (Stoicism). Often those accused of being cynical reply with the term ‘realism.’ Seeing and stating things as they are, rather than remaining blind by propaganda and comfortable conventions.

Was the boy who declared that the Emperor has No Clothes a cynic or simply stating a reality not blinded by propaganda. What are we to do with this critical facility of not trusting Hypocrisy?

Be like that lad in Emperor has No Clothes. See what is actual, and not be taken in by the fraud. In that truthful state, seek actions that are whole. No longer tacitly funding and support the imposter. We are David and the political fraudsters are Goliath. As Robert F. Kennedy Jr. described, you get up each morning and push the rock of truth up the hill, not because you are going to win, but because that is what you do. And we need to model that for others, especially children. 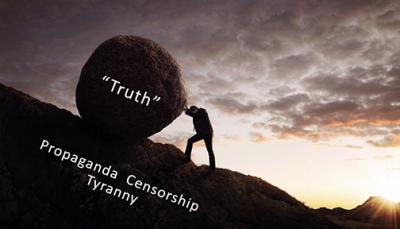 Stoicism is a school of Hellenistic philosophy in Athens in the early 3rd century BC. It is a philosophy of personal ethics informed by its system of logic and its views on the natural world. According to its teachings, as social beings, the path to happiness, or wholeness is found in accepting the moment as it presents itself, by not allowing oneself to be controlled by the desire or by the fear of pain, by using one's mind to understand the world and to do one's part in nature's plan, and by working together and treating others fairly and justly.

Like the term Conspiracy Theorist, the meaning twisted by the CIA to neutralize critics, being cynical isn’t all bad. There is more than seeing selfish injustice and its implicit hypocrisy for what it is. Celebrating and Affirming its opposite.