A Few Things To Be Thankful For…

Every challenge is an opportunity to dig deep and respond with transforming wisdom, understanding and compassion, today perhaps more than ever.  I am profoundly grateful for the capacity to do just that, over and over again.

I’m grateful for the fifty-six delegates who signed the Declaration of Independence knowing they were placing their lives and fortunes in harms-way.

I’m grateful for the nearly five million signatures on a petition to have the electoral college follow the popular vote.

I’m grateful for a little man named Gandhi for marching and his nonviolent movement that ended British occupation in India and how this legacy has inspired the Water Protectors at Standing Rock.

I’m grateful to have known Ashley Montagu, author of over fifty books including Man's Most Dangerous Myth, the Fallacy of Race first published in 1942, when Nazism flourished, when African Americans sat at the back of the bus, and when race was considered the determinant of people's character and intelligence. Ashley presented a revolutionary theory for its time; breaking the link between genetics and culture that spawned the Nazi holocaust, arguing forcefully that race is largely a social construct, not based biological differences between people.

I’m grateful for the Dalai Lama declaring that we can live quit well without organized religions but not without basic human kindness.

I’m grateful that I had the foresight over forty years ago to not waste another second of my life watching television.

I’m grateful for the ever so rare privilege of being born a human being on an insignificant speck of matter, spinning in a modest galaxy, in an expanding universe that doesn’t care what I do or think.

I’m grateful for the insight that the meaning of my life is what I make of it each moment.

I’m grateful that I have the capacity to rise out of fixed habits and reflexes, that I am able to play and create a bright new reality every moment.

I’m grateful for everything I have learned from my teachers and colleagues, seeing everyday how their dedication, care and passion has infused everything I feel, think and do.

I’m grateful for the infinite ways that being a father, now three times, has changed me and in profoundly positive ways.

I’m grateful to be so fortunate that to make two pumpkin tarts and one pumpkin pie on this eve of appreciation and share washing the dishes with people I love.

I’m grateful for Carly Elizabeth, now two-years, three-months young, reminding me over and over again what is real.

And I’m grateful for the honor of sharing this moment with you. 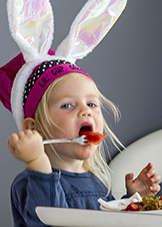