Holding my hand Carly Elizabeth stopped in her tracks. Walking down the street, a few yards ahead, were three large overstuffed derrières and a bright, bored four-year old. The swaggering behinds belonged to a set of grandparents and presumably to their son. Granny stopped the herd, grabbed the boy by the shoulder and smacked him in the seat, shaking him. “If you don’t shut up I’ll smack you again,” and she did. Predictably, the boy cried and the matriarch smacked him again.

How would she feel if someone ten times her size did the same thing to her, in public, yelling and shaking her into sobbing submission, not once, but on a regular basis? Everyday abuse of children is normal. It happens every day in every city and neighborhood and no one does a thing about it. By their silence the boy’s father and grandfather were supportive accomplices. I did nothing and I am ashamed to admit it. I let it happen.

Some years ago walking the streets of Amsterdam, passing the Anne Frank house, a native of the Netherlands prefaced many of his observations by saying, “before the war.” It happened so frequently that I asked: “what was it about the war that changed everything?” “Many things,” he said, “but the deepest scar was the shame many felt for allowing it to happen. Most did nothing,” he said, “and by doing nothing they contributed to what took place.”

Drugged newborns are routinely snatched from drugged mothers shortly after ‘delivery’ by masked physicians and placed in plastic isolation containers. Gone are the scent, skin to skin contact, gentle movement, reassuring heartbeat, voice, and unique harmonic vibration known as mother. The shock of abandonment has taken her place. By every measure this isolation is sensory deprivation to a new nervous system that need rich, complex, affectionate sensory stimulation like sun and rain are to a sprouting seed. Depriving the newborn of these sensations is a form of torture, similar to the disorienting treatment many prisoners of war suffer with lasting physical and psychological scars.

A few days later the majority of male babies are strapped to a table, legs spread, and the most sensitive surface tissue, designed to experience pleasure, is cut off with a sharp blade and tossed in the trash. The trauma is so intense that many go into shock screaming in vain until they turn blue. Abuse of children is normal. It happens every day and we let it.

There is a dark side to being a parent. Becoming a parent is a public event. Everybody is looking and they keep looking. I suppose this is a major reason most do nothing. Children reflect our competency as parents. Our child’s physical defects are an embarrassment. Bad behavior or bad grades are often equated with bad parents. Reinforcing this spotlight are bumper stickers that proclaim My Child is on the Honor Roll of ABC Preschool. Those awarded are seen as superior to those who are less fortunate and obviously less skilled. The spotlight is bright. Children represent a social mirror. The pressure of that public reflection on parents is monumental.

I wonder how many child beatings, physical and psychological, have been issued because parents found themselves embarrassed by their child’s behavior. And this work of the parent, to spare the rod and spoil the child, is legal in nineteen states, even encouraged by the good book.

We justify this abuse by saying and untimely believing that it is for the good of the child. But is that so? Are these beatings, like the one on the street before Carly and me, enhancing the child’s journey towards self-actualization? What latent capacities are nurtured and developed by spankings, time outs, threats and dirty looks?

Imagine living in relationships where daily breach of the bond, punishment and the implicit betrayal of trust and respect stagnate, festering chronically unrepaired. Imagine how this feeling of rejection etches like acid into the child’s emerging self-world view.

Oh – yes, we must domesticate our children to behave in predictable ways or they will poke their eye out with sharp sticks, burn themselves with fire, fall victim to self-induced pleasure, fall off tall buildings, run into the street and be squished like little bugs, or worse still be abducted by strangers. We must condition them with punishments and rewards like Pavlov and Skinner, for their own good. Might the increasing trend towards early and extended childcare be a form of abuse, both in the sense of breaking the bond and potential sensory deprivation, the loss of intimate and affectionate touch, movement and play?

Is the absence of breastfeeding a form of sensory deprivation and therefore abuse? When we imprison young children in government regulated compulsory schools, day in and day out, in strictly monitored, controlled, military inspired, factory modeled environments, where art, dance, and free play have been replaced by ‘no child left alive’ tests and drills, is that everyday abuse to a sensory and emotional system designed to move, wonder, inquire, imagine, and make believe?

Is it sensory deprivation when we stop holding children in our laps and making up stories, when they stop hearing descriptive words that develop, stretch and expand their imaginations (and ours), and instead click another episode of Baby Einstein on the phone?

Is it everyday abuse when the wild boyishness of Thomas Edison and Mark Twain’s Huck Finn and Tom Sawyer is caged, tamed, domesticated with mind altering prescription drugs, not in one or two special children but in millions? And we let it happen like the neighbors of Anne Frank.

We are enchanted, caught in a spell, hypnotized by our cultural conditioning and because of this obsession we punish and reward dimming the lights in our children’s eyes before they even learn how to see – for their own good, we insist justifying that it is with the best of intentions.

Imagine if comparison, praise and grades, punishments and rewards were banished. Imagine if adults suddenly lost the capacity to threaten children by saying no, which, as you know, is often the first word a child masters. What then? What would most parents, coaches and educators do?

Imagine what would happen to most adults if children only perceived and responded to messages they trust and respect, and all others not registering on their radar, as if the child was deaf or the message invisible like colors to the color blind. Break the bond, lose trust and respect and we lose any positive influence we might have with children. This is a reality, at least when it comes to positive influence which is the only form worth having.

Shame on you! Can’t you do anything right? I told you to never do that again! Get to your room and stay there until I tell you to come out! Why can’t you be more careful! Don’t touch. How many times do I have to tell you? The focus of these and a thousand phrases like them is our social image. It is this image and the behavior behind the image that is rejected, mistaken, wrong, inadequate, incorrect, unsatisfactory, a failure that needs improving.

The test is easy. Is the focus of our attention learning or the child’s social image? Shame on you. How many times do I have to tell you? Can’t you do anything right? The subject of each of these is the child’s social image. It is difficult to find a pair of socks when the room is so messy. Glass is slippery in soapy water. People driving fast cars can’t see little people like you. With these the subject is learning, not the child’s false social image. No shame is possible without the image, which is its true social function of that image, conditioning and control.

Most abuse is linked to the social image either the child’s for not matching the adult’s expectations or the adult’s for not matching society’s expectations. There is a way of seeing and relating that is free from the harmful impact of social images. For more on this consider listening to the Who Do We Think We Are? - an 80 minute audio at https://ttfuture.org/academy/audios/michael-mendizza

Being with Carly renders me especially sensitive to everyday abuse. Ending this is easy; replace authority and control, punishments and rewards, with trust, honest communication and respect. Replace shame and its false image with affection and a genuine focus on learning and shared meaning. It takes far less energy and the results are joy instead of tears. A good trade, don’t you think?

I am interested in HOW you would intervene with the first example of the abuse? What would you say? I have been in the same spot – but I never know what to do that would be helpful to all?

The advice in a barroom fight is to not get involved. The adult (assailant) is already triggered because the child is embarrassing them. To intervene will only add fuel to the fire. With strangers, unless the child is in real danger, I don’t think there is anything you can do. If we know the person, then we have a chance to help them see the harm they are doing. But even that is asking a lot.

A much better response…

I remember being at an amusement park where my son had produced and directed the theme park theater show. As we walked up the steps to the theater, a woman was doing to her daughter what the grandmother was doing to her grandson. I said to her, "Hitting your daughter teaches her how to be violent, too!" She stopped spanking the little girl. My friend said to me, "You can't tell parents what to do with their children." And I said to her, "My father did that to me in public until I was in my teens! If just one person had told him to stop, if just one person had said to him that he was being cruel, even if my father hadn't stopped, I would have been grateful!" We must speak out when we see violence being inflicted on children. I hope you find your voice for the next time. It will help Carly know what to do, too.

When my friend sees someone hitting their child, he goes in the opposite direction and says "Hit him again, hit him again, harder, harder." Offenders stop their actions immediately. Whatever it takes! And, what would happen if everyone had the nerve to say something? At least those parents would stop abusing and shaming their children in public. 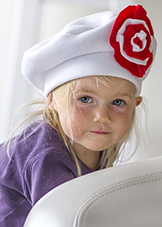