After all, we allowed them to shut down the world down in three weeks.

We have been deeply conditioned to scan ever-increasing packets of information, mostly with our thumbs. We skim the headlines, watch commercial-length videos and tell ourselves that we know. This is no ordinary event. Our future is being sculpted; our civil liberties, right to informed consent, the right to assemble, freedom of speech, basic freedoms such as freedom to travel, due process, the assumption of innocence until proven guilty, habeas corpus: immediate release from unlawful confinement when that confinement violates our constitutional rights, and more, not to mention plunging the global economy into a deep and sustained depression, without proof that the actions being taken are equal to the threat. What is missing in the story being told is context. Without context, the meaning is whatever we believe it to be. The age of Enlightenment and the scientific method was supposed to put an end to superstition: a belief or practice resulting from ignorance, fear of the unknown, a false conception of causation, a notion maintained despite evidence to the contrary.

What is context: big is big in comparison to small. Without small, there is no big. Context provides meaning. Without a context, meaning is whatever we imagine it to be. What we call news and social media is often ‘content without context.’

A treasure map. Yippee, let’s go. We will all be rich. 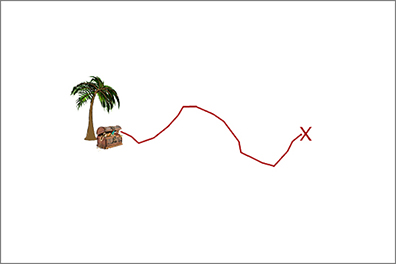 Until we discover the scale or context that gives the map meaning.
Oh, no! We have to walk from Kentucky to Arizona. Context! 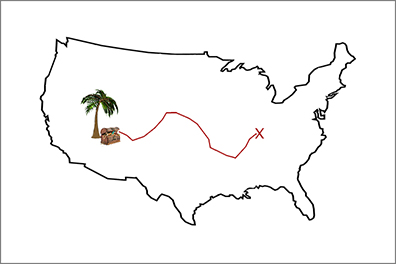 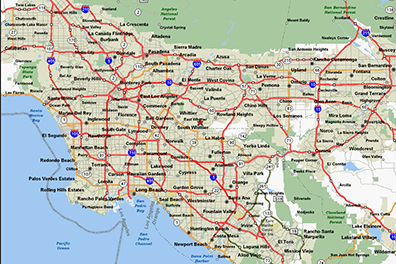 Until you place it on the moon. Gee, that’s small. Context! 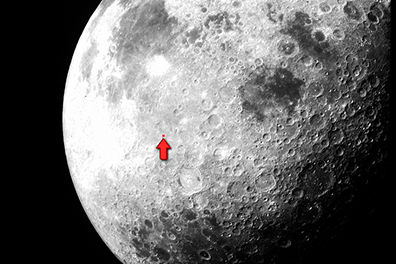 And so it is with the present “whatever it is.” Without context, something Pamela A. Popper provides below, the numbers and cherry-picked images float and mean whatever we, or they, want them to mean. It is the responsibility of each individual to not accept or assume, to doubt, inquire, to ask BIG questions. Our common future depends on it.

New York Gov. Andrew Cuomo had predicted New York would need 140,000 hospital beds and 40,000 intensive care units with ventilators for the anticipated pandemic “surge.” But, instead, only 18,500 were in use at week’s end — about 13% of the predicted need. The Javits Convention Center had only 300 patients, with 2,500 empty beds. Source: New York Times April 10, 2020

NY Governor Questions Whether a Total Shutdown Was the Right Strategy April 11, 2020

New York’s sweeping, statewide quarantine orders have served as a model for other states, making everyone in the U.S. prisoners in their own homes, with the exception of certain “essential” workers. Now Gov. Andrew Cuomo is questioning whether a total shutdown was the right thing to do. “It was probably not the best public health strategy,” he said.

Why Are Heart Attacks Decreasing in this Pandemic? April 10, 2020

The New York Times suggests behavior changes may be preventing the issues, or people are just suffering and not going to hospital…. If anything, the opposite is happening. People that are dying of traditional causes are getting labeled (and counted) as COVID-19.

Making Sense of the Coronavirus Data - Pamela A Popper

Pam serves on the Physician’s Steering Committee and the President’s Board for the Physicians’ Committee for Responsible Medicine in Washington D.C. She served as part of Dr. T. Colin Campbell’s teaching team at eCornell, teaching part of a certification course on plant-based nutrition. Pam is a public policy expert and continually works toward changing laws that interfere with patients’ right to choose their health provider and method of care. She has testified in front of legislative committees on numerous occasions and has testified twice in front of the USDA’s Dietary Guidelines Advisory Committee.

Let’s contrast these data with coronavirus data. As of April 4 the World Health Organization reports that there are 1,051,624 confirmed cases of coronavirus and 56,985 deaths worldwide.[11] The CDC reports 239,279 cases and 5443 deaths in the United States.[12] I am not a Harvard-educated virologist or world-renowned epidemiologist, but it seems that the response to these data is disproportionate and makes no sense at all. I’m not the only person who thinks so.

Dr. Paul Offit, Head of the Vaccine Education Center at Children’s Hospital Philadelphia, and Professor of Medicine at the University of Pennsylvania, has expressed concern about this too. He says that closing the schools was most likely a bad idea, and was not suggested by the CDC. And he is concerned about the level of hysteria being ginned up with tests that are most likely inaccurate. He says that this is not the first time this has happened. According to Dr. Offit, during the 2009-2010 swine flu epidemic, the original mortality rate was projected to be 4% (potentially cause for concern), but follow-up serological studies showed that the death rate was actually only 0.01%. He feels certain that this will be the case with coronavirus – it will be shown to be less deadly than seasonal flu.[13]

Records show that even with the higher number of cases and deaths with H1N1, there was no reason to declare a pandemic. I suspected that something was not right when in 2009 the CDC instructed health care professionals to stop testing for H1N1 and to assume that everyone who presented with flu-like symptoms had H1N1 flu and to report it as such. CDC’s statement to the public was that resources should not be wasted on testing when the government had already determined that there was an epidemic.

Note: Here we go again: The W.H.O. Announces "Suspected" Cases of COVID-19 Should be Written as COVID-19 Deaths (No Test Required)

At that time, I reported that the number of cases did not indicate that there was an epidemic; that the feds had ordered 193 million doses of flu vaccine, and needed to “sell” these doses to the public; and that the CDC’s directive to stop testing was an attempt to prevent the public from finding out the truth.

A CBS news investigation confirmed my theory. CBS requested state-by-state testing results for the period prior to the halting of lab testing from the CDC. The CDC refused to provide the data, so CBS filed a request under the Freedom of Information Act with the Department of Health and Human Services, and also asked all 50 states to provide their data on lab-confirmed H1N1 prior to the order to discontinue testing.

The results when the data were finally turned over? The majority of patients were negative for both H1N1 and seasonal flu even though the states were testing patients deemed to be at the highest risk of having H1N1, such as people who had visited Mexico. Health authorities reported that these people had colds or upper respiratory infections, but not flu.[14]

The bottom line was that the predicted epidemic of flu, along with deaths and co-morbidity did not take place, and instead of telling the public the truth, the CDC lied in order to make its prediction appear to be true.[15]

The World Health Organization was an active participant in the deception. According to the Committee on Social, Health and Family Affairs of the Parliamentary Assembly of the Council of Europe (PACE), the WHO engaged in fear-mongering in regards to the H1N1 flu, without any evidence to back its actions. As a result, approximately $18 billion dollars was squandered worldwide.

PACE determined WHO colluded with the drug companies, turning “run-of-the-mill” flu into a “pandemic.” Drug companies benefitted financially, millions of people were vaccinated without cause, and without evidence that the vaccine was effective since it was not clinically tested. Testimony at a public hearing included this statement, “We are witnessing a gigantic misallocation of resources in terms of public health. Governments and public health services are wasting huge amounts of money in investing in pandemic diseases whose evidence base is weak.”[16]

Epidemiologist Wolfgang Wodarg said the “false pandemic” is one of the greatest medical scandals of the century.[17] Dr. Ulrich Kiel, director of the WHO Collaborating Center for Epidemiology in Munster, Germany agreed.[18] The swine flu was actually much milder than the seasonal flu. The CDC later reported that the death rate was one-tenth to one-third of the death rate from normal seasonal flu.[19]

Why would the WHO have declared a pandemic when there was none? Not surprisingly, the drug companies influenced the response, since they had so much to gain. (Note; Bill Gates is the largest donor to WHO, after the United States, and handpicked the current director.) Three scientists who helped to develop WHO guidance on pandemic influenza preparedness had consulted for drug companies that would profit from WHO policies. These conflicts were not disclosed in a document titled WHO Guidelines on the Use of Antivirals and Vaccines During an Influenza Pandemic, issued in 2004. The WHO refused to reveal the names of members of WHO Emergency Committee set up to guide response to the H1N1 “pandemic.” This is concerning since the responsibility of this committee included when to change/increase the response rate.[20]

An additional motivation was revealed by Margaret Chan, at the time WHO Director-General. She said in a speech that "ministers of health" should take advantage of the "devastating impact" swine flu will have on poorer nations to get out the message that "changes in the functioning of the global economy" are needed to "distribute wealth on the basis of” values "like community, solidarity, equity and social justice.“ She further declared that the pandemic should be used as a weapon against "international policies and systems that govern financial markets, economies, commerce, trade, and foreign affairs.”[21] In other words, Chan looked at fake pandemics as a form of social engineering, to be executed according to her beliefs, of course.

It looks like the H1N1 episode may have been a “dress rehearsal” for what we see unfolding daily right now. People are panicked and hiding in their houses, convinced that what they see on television is true. They are not aware of the data I’ve included in this article (and others), and do not investigate for themselves.

Government and health agencies and the people who are in charge of them, along with their business partners, the drug companies, have committed these terrible acts in the past and gotten away with them. Thus they have become bolder and bolder over time. So it’s not surprising that they are now so powerful that within a few weeks they have taken away our freedoms, the right to operate businesses, to attend religious services, and have literally closed the world down.

This time we cannot sit idly by until the powers that be “let us” get back to our lives at some point, express gratitude that we can now move about as we please, and then wait for them to do it again. We must commit to doing whatever is required to never let this happen again.

[16] Extracts of statements made by the leading participants at the public hearing on "The handling of the H1N1 pandemic: more transparency needed?", organised by the Committee on Social, Health and Family Affairs of the Parliamentary Assembly of the Council of Europe (PACE) in Strasbourg on Tuesday 26 January 2010