A Deeper Kind of Right Action

The context for what follows is one of Krishnamurti’s most challenging precepts. Political action or revolution is not deep enough. One corrupt regime or act is replaced by another. Yes, stopping Hitler was necessary, but not with Hiroshima, the genocide of Dresden, et.al., including the expansion of the military-industrial complex, the CIA overturning countless sovereign governments, Viet Nam, Iran-Contra, Iraq, Ukraine, weaponizing public health, and more.

Krishnamurti was in his teens during WWI. Mature during WWII. He knew Gandhi and the leading politicians in India, intimately. He understood, a problem can’t be solved at the level of the problem; which political action tries to do. Something much deeper, a completely different approach, to quote David Bohm, is needed.

In his book, “Not in His Image,” John Lamb Lash, describes how the Pagan tradition, that inspired humanity for millions of years, and its elite teachers, the Gnostic Mystery Schools, viewed a small zealot savior-cult. Having been infected by monovalent mental parasites called Archons, cult members imagined and believed that “His,” meaning the parasites’ abstract images, not nature, was sacred.

Archons were believed to be psych parasites, invisible entities in the service of evil, that infect the mind of humanity by creating an “image” of themselves that they claimed to be God, providing the context for monotheism, thus the book title “Not in His Image.”

These parasites capture and control what we call ‘reality.’ Once infected, the parasites are extremely difficult to purge. These images take root and displace direct perception of our true sacred nature, which is nature, Sophia, by a delusional turning of attention to a false, abstract, alien “God in the Sky,” negating our true divinity which is the body, and that being nature. It is worth considering that the non-dogmatic essence of the science of mind called Buddhism, is this purging, a return to an un-enchanted reality with its original appropriateness of heart, mind, intelligent insight, and action.

The Gnostics saw this mad, delusional process unfold as the Roman Catholic Empire, which turned its wrath on the Gnostics, the high teachers of paganism, ushering in the Dark Ages, which we are still in. 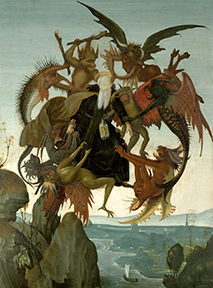 “The Torment of Saint Anthony” by Michelangelo

To the point: As the Roman Catholic empire, with Nero as its poster child, was based on a pervasive mental illness that persists, why do we believe that contemporary politics is any different?

Robert F. Kennedy, Jr, as dedicated a Democratic family as one can get, notes; the traditional meaning of Democrat and Republican no longer applies. The traditional meaning has been captured, as has most of our government and governments around the world. Traditional terms now represent frames of mind that are often in conflict with their original meaning. It was for this reason that RFK Jr. was asked to write the foreword to Berry Goldwater’s biography, the most conservative Republican of his time, who by today’s standards, would be considered liberal.

Yes, grassroots power exists, as the perennial challenge to top-down corruption. Grassroots consciousness and action are essential. But what action? That is the game-changing question. Top-down is always corrupt, and with extremely rare exceptions, always has been. Look at the lives of the Stoics, Cleopatra, and our Founding Fathers. Listen or read “Alexander Hamilton,” by Ron Chernow, the best history of the founding of the US republic ever. We see a constant stream of abuse, violence, and wars with weaponized public health being the latest assault.

At a fundamental level our President, whoever he, not she is, is a “B” class actor, performing a script written by others. What we see as news is mostly theater, and our wellness and sanity improve by seeing this directly.

Free from this enchantment, we are free to act in ways that are not corrupt, ways that mirror the intrinsic values many hold and share, values exploited by today’s Archons, mental parasites, as was done in the past.

The future abides in the hearts, bodies, and psyches of today’s, and future, young people, with childhood suicide being the key indicator of well-being. No, it is not encouraging, something Joseph Chilton Pearce noted decades ago. This is where our collective efforts must be focused, awakening and developing un-enchanted hearts and minds, not by marinating in cheap and manipulative entertainment or social media tweets.

Sure, vote for the person you believe is most qualified, the litmus test being how impervious or resilient they are to corruption. Keeping in mind that the heart of the democratic process has changed. With the Lincoln-Douglas debate, voters sat on the lawn and listened for eight hours to actual people, not Zoom or CNN surrogates. Lobbyists don’t care who is in office. Their money and influence glows as brightly in everyone’s pockets.

No, I don’t think I’m being cynical. Rather, I see that corruption is systemic, and has been for centuries. See Whitney Webb, “One Nation Under Blackmail,” two massive volumes with proper citations. Whitney describes how the game is really played today, as it was in ancient Rome.

Whether or not the Gnostic creation myth is “true,” meaning literal and accurate, matters not. As a metaphor, it is “true.” Humanity has not grown up in the sense of understanding its own capacities. The Sorcerer's Apprentice embodies this. As does the Garden, Eve, the Tree, and Apple. Knowledge, in this deeper sense, is the capacity to imagine, abstract and metaphoric thought.

What we have not evolved is the un-enchanted capacity to distinguish between direct perception, with its casual-creative energy and “insight,” and conditioned memory, including most forms of reified thought, imagined images of self, beliefs, and culture.

Thou shall not worship idols (images) before ‘truth,’ which is our true nature and vast capacities, not imagined images. A Misuse of Memory is Original Sin redefined.

The Gnostics understood this. The zealot savior-cult, infected by Archons, mental parasites, so believed in the delusions they imagined, they slaughtered the Gnostics and their teachings, as elites today censor, persecute, and silence those who don’t comply with “the narrative.” In this regard, today is no different than zero BC. Same delusion, with different images, context, and costumes.

What “doing the right thing” means changes with this perception. It also transforms the fight. “Housekeeping in a dream,” one learned Tibetan described. “Fighting Democrats or Republicans in a dream,” is still a dream.

Like switching on the lights in a nightmare, awakening from the dream negates the fight. The battle is replaced with, and frees, a different quality of coherent perception and action. This new action awakens the same in others, not more delusional fighting, more of the same. Think of this new state as the Serenity Prayer, in a different more powerful context, always awakening.

Thoughts and concepts fighting each other, even manifest physically, doesn’t change a thing. Real change is a different state of mind, awake and free from our chronic and enchanted “misuse of memory.” We need to discover and embody what un-enchanted wakefulness feels like, with its authentic and reciprocal values, and model this absolute clarity for our children. That is the right thing to do. Not more of this.