I wonder what good it will do to repeat decades of research on mother-infant separation when current research is systematically shredded, manipulated, twisted, repressed, bought, fabricated, intentionally confused, in a world where confusing has become the preferred policy. After all, political propaganda is a powerful form of control. My favorite is the report that Building 7 had collapsed on 9/11 twenty-minutes before the building collapsed. The first irony is that Building 7 could be seen behind the BBC reporter describing its collapse. The greater irony is that no one seemed to care who wrote the script? Cut. On to the next media event.

Strategically separating children from parents to achieve a political goal is planned, intentional torture of innocent children. A 2017 US Government Report describes the widespread use of separating families as a matter of policy, pre Trump. Since 2005, as a matter of procedure and policy, border agents routinely separate children and families intentionally, as punishment or consequences, through what the DHS, (the Department of Homeland Security) call its Consequence Delivery System. These consequences are meant to deter future migration, often regardless of international protection or other humanitarian concerns. Who cares? A few thousand kids? They call it collateral damage, often a small price to pay to achieve a political goal. (I often wonder, for those who wrote the script, were the lives lost on 9/11 collateral damage?)

Is this what our nation has become, foreshadowed in 1978 by Jerry Mander in his Four Arguments for the Elimination of Television. Like a Bruegel painting; Landscape with the Fall of Icarus, no one seems to notice, and even if they do, it is nearly impossible to focus a chorhent respons with attentions fragmented by an endless stream of equally shocking events. Cut! 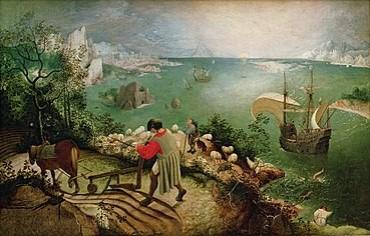 Strategically separating children from parents to achieve a political goal is planned, intentional torture of innocent children. If you dare to experience what separation does to the developing human brain, James W. Prescott, PhD, strongly recommends watching a twelve-minute program we created some years ago. Why would we do this to our children? Is this what we have become?