This writer has previously proposed that Two Americas exist because our Two Humanities with our Two Moralities have been generated by our Two Cultural Brains that have been formed by the two evolutionary life experiences of Pain and Pleasure, which encodes our evolutionary and developing brain for Peace or Violence. This worldview can be seen at the following sites:
http://www.violence.de/prescott/letters/Our_Two_Cultural_Brains.pdf
http://www.violence.de/prescott/letters/Profiles_Peaceful_v_Violent.pdf

SIMONE DE BEAUVOIR (1949/20 in The Second Sex noted the two moralities that divide Man and Woman—our Humanity—that propels Humanity toward Peace or Violence:

The mother would enjoy the same lasting prestige as the father if she assumed equal material and moral responsibility for the couple; the child would feel an androgynous world around her and not a masculine world; were she more affectively attracted to her father—which is not even certain—her love for him would be nuanced by a will to emulate him and not a feeling of weakness: she would not turn to passivity “ (p.761).

Without moral equality between Man and Woman an androgynous world is not possible and Imperial Masculinity prevails. Beauvoir noted that Pythagoras (circa 582-507 B.C.) set the world stage for gender morality:

This is structured in Greek, Judaic, Christian and Islamic theology:

"Woman is the origin of sin, and it is through her that we all die." (Ecclesiasticus 25:24)

“The female is female by virtue of a certain lack of qualities”, Aristotle said. “We should regard women’s nature as suffering from natural defectiveness.” And Saint Thomas in his turn decreed that woman was an “incomplete man,” an “incidental” being” (p.5)

Islamic Taliban violence against Women and her Children is well documented. In these traditions Woman is Chaos and Darkness (Sin); Man is Order and Light (Virtue). This philosophical/theological chasm divides Humanity which cannot be bridged but only abandoned, as human history attests and if Peaceful, Harmonious, Egalitarian Relationships are to become a reality.

There is another solution to this philosophical/theological entrapment and that is through affective nurturance in the maternal-infant/child relationship; and in the youth sexual affectionate relationships, as documented above and elsewhere.

We are reminded of Professor Hrdy’s (1999) observations in Mother Nature:

"Great Ape mothers carry their infants wherever they go. Fathers, by comparison, are rarely in direct contact with babies" (p.205). And "It was the mother who continuously carried the infant in skin-to-skin contact-stomach to stomach, chest to breast. Soothed by her heartbeat, nestled in the heat of her body, rocked by her movements, the infant's entire world was its mother. (p. 98).
"...no wild monkey or ape mother has ever been observed to deliberately harm her own baby"(p.179). Emphasis added.

What has happened along the evolutionary trail where human maternal violence against her offspring has suddenly emerged without any history of such behavior in the primate evolutionary record? How this unanswered question is answered will determine the future of humanity.

Or to Ashley Montagu’s (1952) statement in The Natural Superiority of Women:Women are the mothers of humanity; do not let us ever forget that or underemphasize its importance. What mothers are to their children, so will man be to man" (pp. 247-248)

America’s families, and their children, are in trouble, trouble so deep and pervasive as to threaten the future of our nation. The source of the trouble is nothing less than a national neglect of children and those primarily engaged in their care— America’s parents. The Editorial Committee objected to this statement on the grounds that it applied only to a minority of the nation’s children and that, therefore, no note of urgency was justified. I strongly disagree (p. 252) (Bronfenbrenner, 1970)

Bowlby (1951), over a half century ago, has reminded the world of its neglect and abuse of children and its consequences for humanity:

"Deprived children, whether in their homes or out of them, are the source of social infection as real and serious as are carriers of diphtheria and typhoid. And, just as preventive measures have reduced these diseases to negligible proportions, so can determined actions greatly reduce the number of deprived children in our midst and the growth of adults liable to produce more of them" (p.181)

This author has initiated a dialogue on this AAP Policy Statement that can be found In Pediatrics Online. http://pediatrics.aappublications.org/content/126/3/592.abstract
Breastfeeding Mothers are rarely violent toward their nursing infants and children which points to a solution for preventing the high infant mortality rate and its relationship to homicide.

WHO/UNICEF in their 1990 Innocenti Declaration declared that “children should continue to be breastfed, while receiving appropriate and adequate complementary foods, for up to two years of age or beyond…”

Pain and Pleasure encodes the developing brain to become Neurodissociative or Neuroassociative in Function, which drives our Two Moralities and Two Humanities for Peace or Violence. The complexities of these relationships have been previously detailed by this writer in Body Pleasure and the Origins of Violence (1975); The Origins of Human Love and Violence (1996); Only More Mother-Infant Bonding Can Prevent Cycles of Violence (2001); Our Two Cultural Brains: Neurointegrative and Neurodissociative that are formed by Pain and Pleasure Life Experiences Encoded in the Developing Brain (2003); The Origins of Love: How Culture Shapes the Developing Brain and the Future of Humanity (2004); Why Breastfeeding Mothers are Important (2007); and elsewhere.

These realities are reflected in our Infant Mortality statistics (lower nurturance), and duration of breastfeeding by States (higher nurturance), which defines the Two Americas that we have become.
For the year 2004 the CDC reported the PERCENT CHILDREN BREASTFED AT 12 MONTHS BY STATE, which I compared to the infant mortality rates of the 50 States for the same year and found:
90% (9/10) States With Less Than 15% of Children Breastfeeding At 12 Months Have The Highest Infant Mortality Rats. 83% (10/12) States With Greater Than 25% of Children Breastfeeding At 12 Months Have The Lowest Infant Mortality Rates: 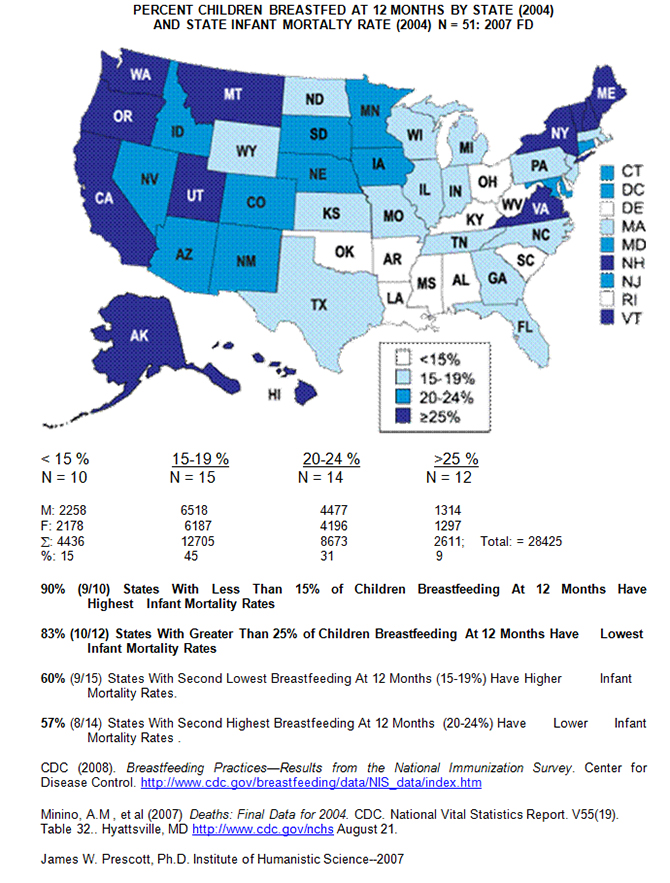 Note the Two Americas in the 2004 CDC Map of States distributed by PERCENT CHILDREN BREASTFED AT 12 MONTHS BY STATE, which I compared to the infant mortality rates of the 50 States. The White and Light Blue States are clearly distinguishable from the Dark Blue and Purple States, which define two blocks of States.

I have particularly noted that DELAWARE ranks among the States with the highest infant morality rates and with the lowest duration of breastfeeding. https://ttfuture.org/bonding/blog/breastfeeding-bonding-prevents-infant-... suicide.

The March of Dimes has published a 2012 MAP of the 50 States with a report on the grade given for their percent reduction of preterm birth rates (births <37 weeks gestation), a leading cause of infant mortality. DELAWARE has received a grade of “B”, which is inconsistent with the latest report of the CDC/NVSR that ranks DELAWARE with one of the worst infant mortality rates among the 50 States.

Compare this March of Dimes 2012 Prematurity Birth Map with the 2004 CDC Breastfeeding Duration Map and you will discover a virtual overlap of the Two Americas. The Red, Yellow and Orange States are clearly distinguishable from the Light Blue and Purple States, which define two blocks of States. 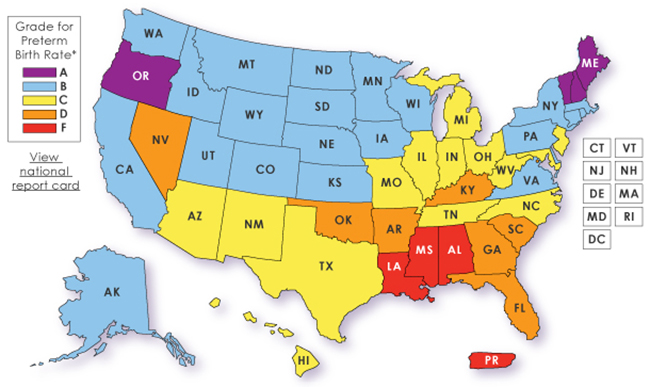 Overpeck, et al (1998), NICHD staff scientists, have confirmed these relationships: “Homicide is the leading cause of infant deaths due to injury accounting for almost one third of such deaths in 1996.... More than 80 percent of documented homicides in very young children can be viewed as fatal child abuse, and there is strong evidence that both homicides and fatal cases of child abuse are under accounted” (p.1211).

Herman-Giddens, et.al (1999) found the underestimating of child abuse homicides in a study in North Carolina from 1985-1994. They found that the INTERNATIONAL CLASSIFICATION OF DISEASES (ICD-9) cause of death coding underascertained child abuse homicides by 61.6%.
These studies have yet to be replicated but strongly implicate violence in our infant mortality rates that have been neglected or ignored by the health science community.

Peter Cook (1996) in Early Child Care: Infants & Nations At Risk, stated: On the basis of this developmental and social ecology of daycare in America, I conclude that we have a nation at risk" (Belsky, 1992. p. 90. Italics inserted). p. 19.

The future of our Nation and any Human Society rests with its Families, Infants, Children and Mothers. We abuse and neglect them at our peril. 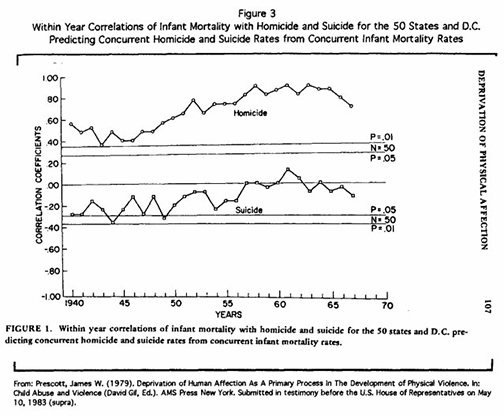 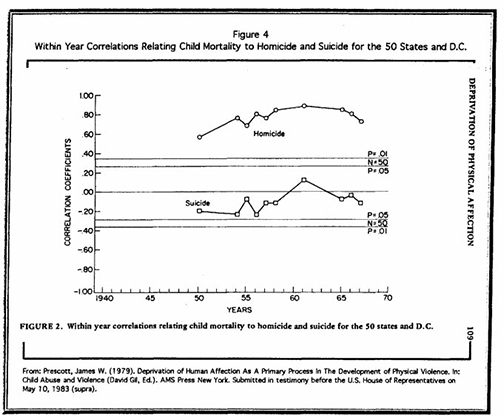 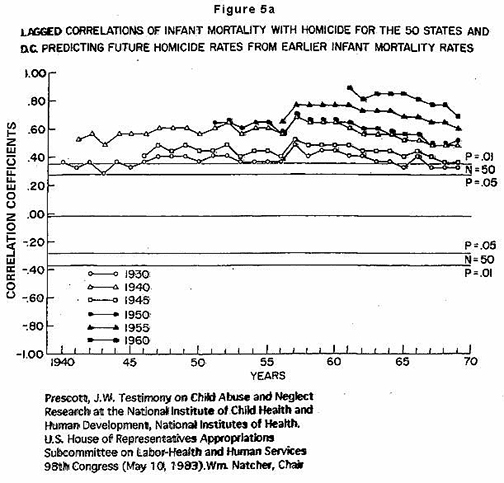 Prescott, J.W. (1975) Body Pleasure and the Origins of Violence. The Futurist April.
Reprinted: The Bulletin Of The Atomic Scientists (1975) November.
http://www.violence.de/prescott/bulletin/article.html

Prescott, J.W. (2004). The Origins of Love: How Culture Shapes the Developing Brain and the
Future of Humanity. byronchild, March-May, 2004b.
http://www.byronchild.com/arts23.htm

Prescott, J.W. (2003). Our Two Cultural Brains: Neurointegrative and Neurodissociative that are formed by Pain and Pleasure Life Experiences Encoded In The Developing Brain
http://www.violence.de/prescott/letters/Our_Two_Cultural_Brains.pdf