Maternal neglect has been with us for a long time, officially since 1928 with the publication of John B. Watson’s book Psychological Care of Infant and Child, the most nefarious psychologist of the 20th Century; and the reminder by John Bowlby with his 1951 publication in the WHO Report: Maternal Care and Mental Health, a landmark publication that is tragically ignored to this day.

There is, today, an indifference and hostility to Motherhood that interprets aberrant behavior in children as “normal” and not the consequence of failure of Maternal Care. This reality is illustrated in PARENTING ADVICE. THE WASHINGTON POST  8.18.16

Head banging in one year old.

My almost 1-year old daughter seems to bang her head on purpose a lot…She should grow out of it, but keep an eye out for other sensory stuff (Again, see the doc)… And, as far as I know this is pretty normal.

The wrongful advice on Parenting still exists in 2016. This pathological behavior has been well documented in the scientific and professional literature summarized in this communication. Head banging is not normal behavior and should be seen by a pediatric neurologist and a developmental neuropsychologist specializing in brain-behavioral disorders.

This failure can be traced to John B. Watson (1928) who wrote “a sensible way of treating children....

Never hug and kiss them, never let them sit in your lap. If you must, kiss them once on the fore-head when they say good night.

Shake hands with them in the morning. Give them a pat on the head if they have made an extraordinarily good job of a difficult task. Try it out. In a week’s time you will find how easy itis to be        perfectly objective with your child and at the same time kindly. You will be utterly ashamed of the mawkish, sentimental way you have been handling it.”

And so the learned psychologist proceeds nonsensically and disastrously on; Bertrand Russell approved the book, Parents Magazine hailed it as one that should be on “every intelligent mother’s shelf,” and the Atlantic Monthly referred to it as “a godsend to parents.”(pp.150-151, 3rd edition, emphasis added).

The teachings of pediatrician Luther Emmett Holt and John B Watson, a century ago, established the fertile foundation for a century of child-rearing practices in America that has born the bitter fruit of the epidemics of depression, impulse dyscontrol, drug addiction and suicidal/homicidal violence that we are experiencing today.

Spock (1972) added to these destructive child-rearing practices with advice to let a crying infant/child cry itself to sleep from his internationally acclaimed “Baby and Child Care”:

The habit is usually easy to break once the parents realize that it is as bad for the baby as it is for them. The cure is simple, put the baby to bed at a reasonable hour, say good night affectionately but firmly, walkout of the room, and don’t go back. Most babies, who have developed this pattern, cry furiously for 20 or 30minutes the first night, and then when they see that nothing happens, they suddenly fall asleep! The second night the crying is apt to last only 10 minutes. The third night there usually isn’t any at all! (p.195, 20th printing, 1972). ( The first stages of abandonment and depression—jwp).

Returning to the spirit of John B. Watson and Emmett Holt, Sr. concerning the issues of body movement and rocking behaviors, we have the following commentary from a prominent pediatrician, Richard Ferber, MD., where he states in his book "Solve Your Child's Sleep Problems" (1985), Chapter 13: "Headbanging, Body Rocking, and Head Roiling", the following:

Many children engage in some sort of repetitions, rhythmic behavior at bedtime, after waking during the night, or in the morning. They rock on all fours, roll their heads from side to side, bang their heads against the headboards of their beds, or repeatedly drop their heads onto their pillows or mattresses. At night this may continue until they fall asleep, and in rile morning it may persist until they are fully awake. If your child is like this, you may be comforted to know that headbanging, body rocking, and head rolling are very common in early childhood and, at least at this age, are usually normal. If your child exhibits any of these behaviors there is little need for concern about emotional difficulties or neurological illness. However, if these symptoms persist or begin in older children, there may be other implications. (p.193, emphasis added). and "In the infant and young toddler, rhythmic patterns are of little significance and you will not need to intervene" (p. 197. emphasis added). And ...

A normal child will not injure himself seriously while headbanging, although he occasionally may bruise his forehead and, very rarely, there may be a small amount of bleeding. Concussions, fractured skulls, or brain injuries just do not occur. The main damage is to furniture and walls.· (p. 198).

It is most alarming that Ferber admits damage to walls and furniture due to head banging but no damage to the immature developing brain. It is difficult to believe that microlesions of the frontal/pre-frontal cortical and other brain structures are not induced by such headbanging that is sufficiently severe to induce scalp bleeding. The long-term developmental consequences of such head traumas have yet to be properly assessed, however, it is well known that many early traumas do not evidence themselves in brain injury until much later in life, e.g. Faro and Windle (1969) who documented delayed brain damage, as much as ten years after the experimental insult of neonatal anoxia.

The findings of the Jacobson group (1987, 1988,1990,1978.2001) in Sweden documented that early perinatal trauma and obstetric drug exposure of various kinds have life-long consequences for later adult' behavior with increased risks of addiction to specific drugs and specific forms of homicide and suicidal behaviors.

This writer strongly disagrees with DeMause (1974,1982) on his conclusions that hunter-gatherer’s are in the infanticide mode, which is not supported by the quantitative cross-cultural data reviewed herein.

To begin with, the childhood of Australian aborigines, like that of all contemporary hunter-gatherers is in the infanticidal mode. That is, they not only kill a large proportion of their newborns without remorse, but also treat those they do bring up with a combination of severe neglect, physical and emotional abuse, and symbiotic clinging (emphasis added, (deMause 1974,1982)

The conclusions of anthropologists like Whiting, Child, Bacon and others that hunting groups have   awide range of child-rearing modes from poor to good are—unfortunately, in my opinion based on wholly inadequate anthropological field evidence. , (deMause 1974,1982)

The following tables lists the:

These data establish the reciprocal inhibitory relationship between Nurturant physical affectional relationships and the violence of authoritarian relationships. 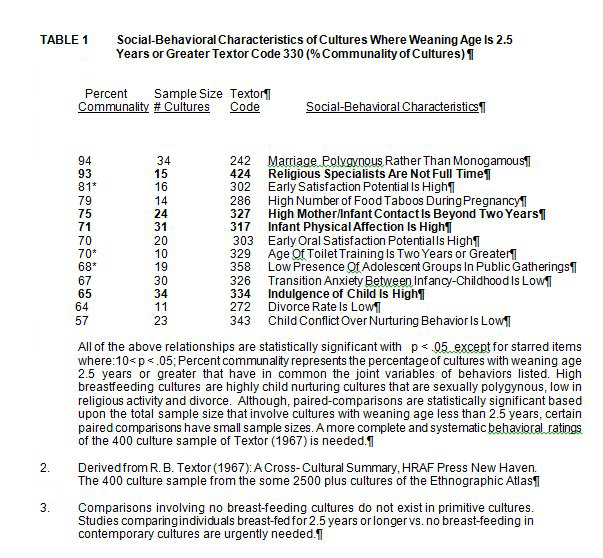 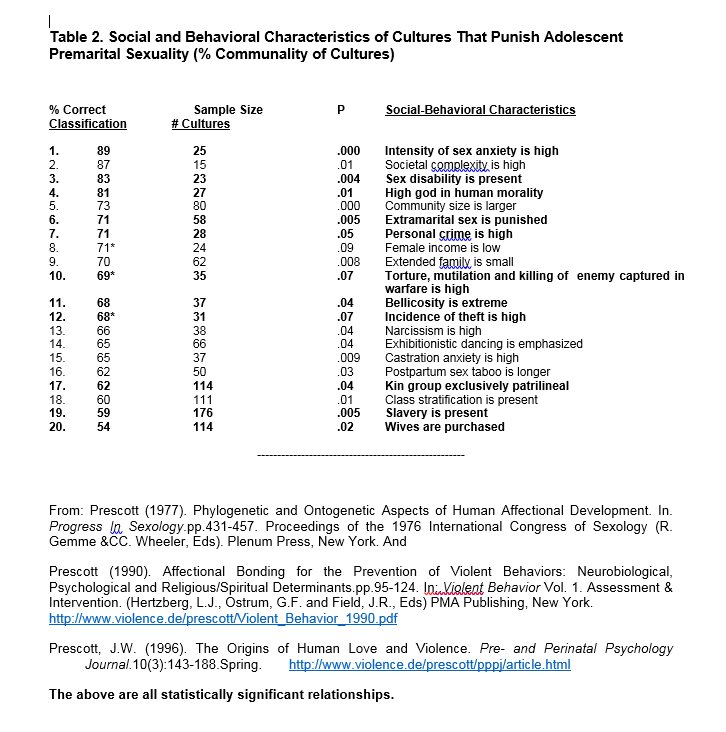 "Among the most significant developments of psychiatry during the past quarter of a century (written in 1951) has been the steady growth of evidence that the quality of the parental care which a child receives in his earliest years is of vital importance for his future mental health." (p.11)....

"Deprived children, whether in their homes or out of them, are the source of social infection as real and serious as are carriers of diphtheria and typhoid. And, just as preventive measures have reduced these diseases to negligible proportions, so can determined actions greatly reduce the number of deprived children in our midst and the growth of adults liable to produce more of them" (p.181).

"Women are the mothers of humanity; do not let us ever forget that or underemphasize its importance. What mothers are to their children, so will man be to man" (pp. 247-248)

"Women are the bearers, the nurtures of life; men have more often tended to be the curtailers, the destroyers of life." (p 241)

A Communication to APPPAH and associates that requires their attention and focus on these Adverse Child Experiences that are ignored today—2016.

The digital world is dominating and shaping the developing brain that denies the sensory world of the other sensory systems vital for the developing of the whole person and human relationships which contributes to our psychopathological state.

BOWLBY, J. (1951/1953).  Child Care and The Growth of Love. Pelican Books. Baltimore, MD. Based upon the World Health Organization (WHO) Report Maternal Care and Mental Health by John Bowlby (1951)

Prescott, J.W. (1975) Body Pleasure and the Origins of Violence. The Futurist  April.

Reprinted: The Bulletin Of The Atomic Scientists (1975) November.