The Importance of Breastfeeding/Bonding to Prevent Infant Mortality And Suicide

This essay, Breastfeeding Bonding Prevents Infant Mortality and Suicide,
along with two accompanying videos provide dramatic information on the complex origins of violence in human cultures throughout the world.

This summary of a wide body of research spanning over 50 years, challenges thousands of years of child rearing practices of the dominant patristic/theistic cultures of the world and explains why those cultures appear unwilling to change, thus perpetuating the violence inherent in those cultures, which now represent the dominate cultures through the wor

Changing culture means changing the brain that supports violent behavior in contrast to a brain that supports, peaceful, harmonious, egalitarian behaviors. The brain is the organ of behavior, as the film documentary supports. Pain inhibits Neurointegrative Pleasure and Peaceful, Harmonious and Egalitarian relationships; Neurointegrative Pleasure inhibits Pain and Violence
BASIC NEURAL NETWORKS OF THE BRAIN ARE FORMED DURING THE FIRST 3 YEARS OF LIFE.

The data presented herein demands the role of embodied Pleasure in human relationships, which is first learned at the breast of Mother—the primary agent of Nurturance, which prevents depression and violence. Disembodied (Divine) Love betrays Humanity and the future of Human Civilization.

Cultural investment in Mothers as Nurturing Mothers is indispensable in changing the newborn, infant, child and teen brain that is the future of Humanity that will make possible Gender Equality.
Ashley Montagu stated in The Natural Superiority of Women ((1952)

Women are the bearers, the nurtures of life; men have more often tended to be the curtailers, the destroyers of life." (p. 241).

"Women must be granted complete equality with men, for only when this has been done will they fully be able to realize themselves" (p. 242). http://www.violence.de/prescott/dvd/Natsup.pdf

The greatest terror a child can have is that he is not loved, and rejection is the hell he fears. I think everyone in the world, to a large or small extent, has felt rejection. And with rejection comes anger, and with anger some kind of crime in revenge for the rejection, and with the crime, guilt ~ and there is the story of mankind. John Steinbeck, East of Eden, 1952

Breastfeeding bonding and baby-carrying bonding are the first events of life, which the newborn/infant/child learns about love and non-violence. Love is first learned at the breast of mother and by being carried on her body ~ like in utero, where the first lessons of being connected with mother are learned. Baby-carrying is the external umbilical cord that assures that the baby is connected with mother, and breastfeeding bonding for 2.5 years, or longer, has been found to be essential for optimizing brain-behavioral development for the prevention of depression and suicide, which makes possible peaceful, harmonious and egalitarian behaviors later in life possible.

These two behavioral measures of maternal-infant/child affectional bonding: 1) baby-carrying during the first year of life and 2) breastfeeding for 2.5 years or greater are the singular developmental events that can PREVENT infant mortality and suicide in the teen and adult years of life. These early life events form the foundation for the neurointegrative brain (joy, happiness and love) as opposed to the development of the neurodissociative brain (depression, alienation, homicidal and suicidal violence).

These Two Cultural Brains are formed during the early years of brain-behavioral development, which makes possible sexual affectional bonding relationships that reinforce the Neuroassciative Brain, where Egalitarian and Harmonious Relationships become possible. The following data are provided In support of this reality.
http://www.violence.de/prescott/letters/Our_Two_Cultural_Brains.pdf

Baby-carrying bonding was found to predict with 80% accuracy the peaceful and violent behaviors ("killing, torturing, mutilation of enemy captured in warfare") in 49 tribal cultures distributed throughout the world. 100% prediction of Peaceful or Violent cultures was possible when youth sexuality was permitted or punished was added as a predictive variable (Prescott, 1975,1977, 1979,1990, 1996, 2005).

Baby-carrying during the first year of life and weaning age of 2.5 years or longer was common to 63% of the cultures studied, thus indicating the high correlation of these child rearing practices (Prescott, 1990). 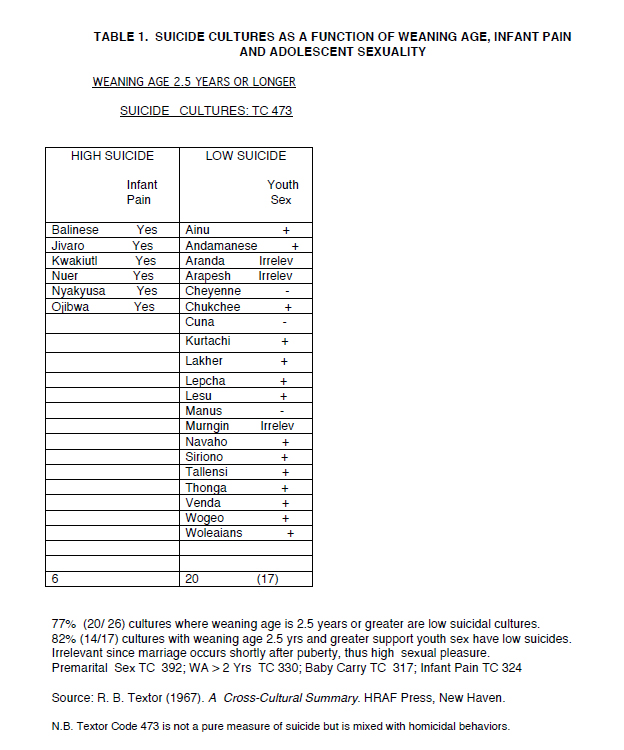 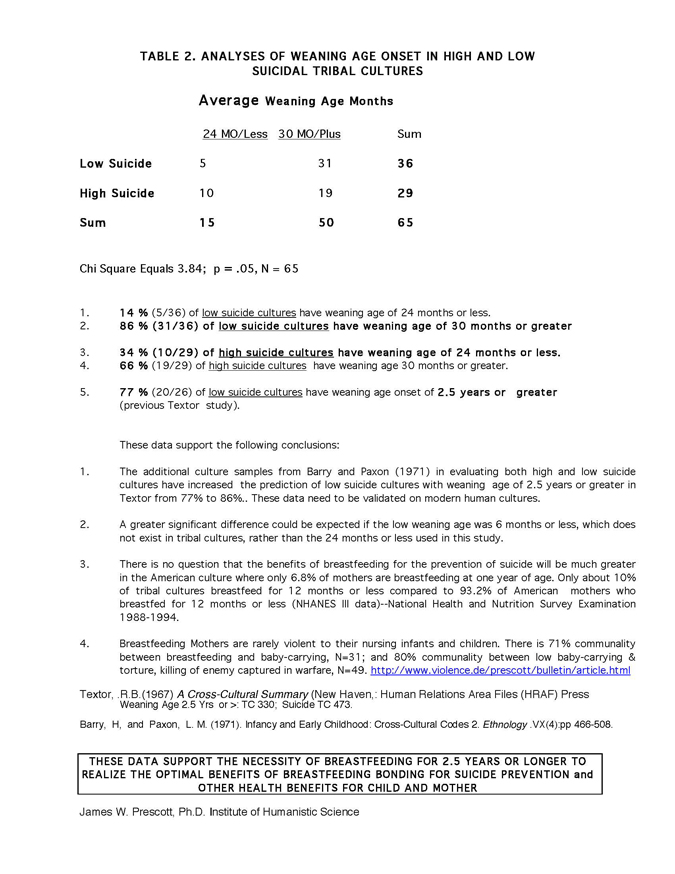 Table 3 presents the  Social-Behavioral Characteristics of Cultures Where Weaning Age Is 2.5 Years Or Greater. Textor Code 330 (% Communality of Cultures) 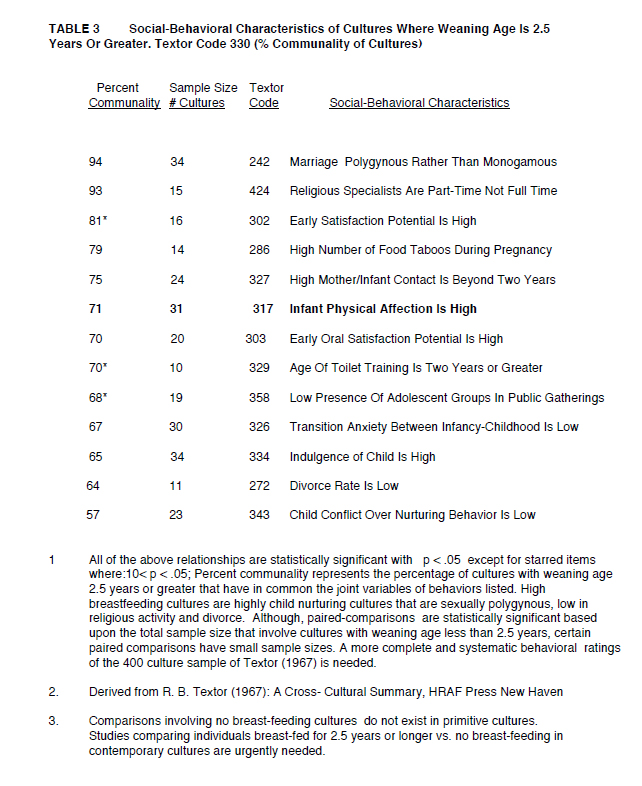 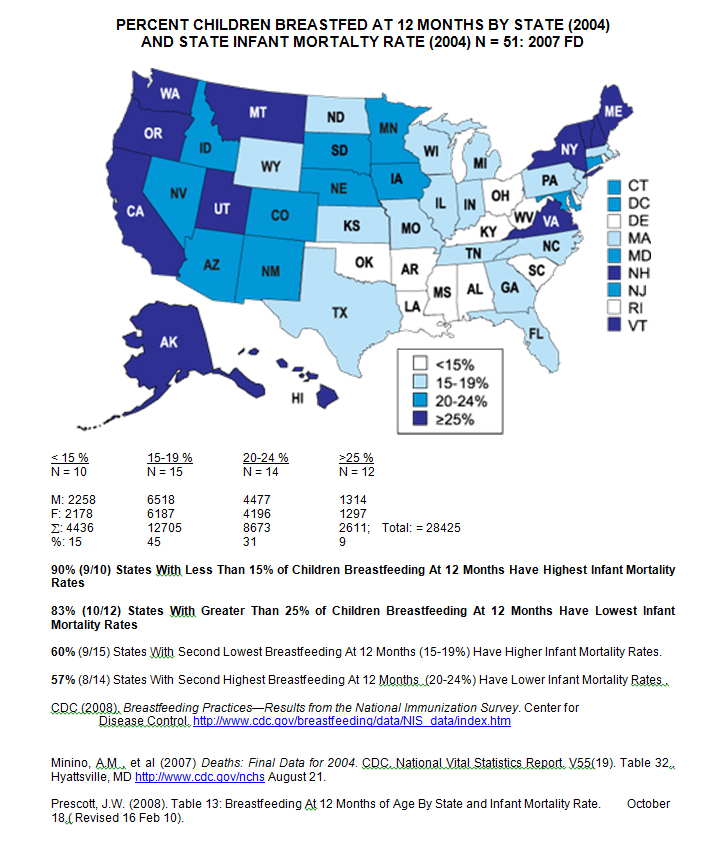 For the children who were ever breastfed:

In an article in the New York Times (8.2.10) by Nicholas Wade “Breast Milk Sugars Give Infants a Protective Coat”, he states: “A large part of human milk cannot be digested by babies and seems to have a purpose quite different from infant nutrition — that of influencing the composition of the bacteria in the infant’s gut”.

Dr David Mills, University of California, stated:
“Such findings have made the three researchers keenly aware that every component of milk probably has a special role. “It’s all there for a purpose, though we’re still figuring out what that purpose is,” Dr. Mills said. “So for God’s sake, please breast-feed.” http://www.nytimes.com/2010/08/03/science/03milk.html

Breastfeeding Bonding for “two years or greater” is essential for life: prevention of infant mortality, depression and suicide and many other health benefits for mother and child.

Human societies must support mothers being nurturing mothers and respect the emerging sexual development of children and youth, if sexual affectional and egalitarian hamonious relationships are to become a reality
http://www.violence.de/prescott/letters/WHO_Innocenti_Declaration.pdf

"Women are the mothers of humanity; do not let us ever forget that or underemphasize its importance. What mothers are to their children, so will man be to man" (pp. 247- 248); Ashley Montagu. The Natural Superiority of Women 1952. 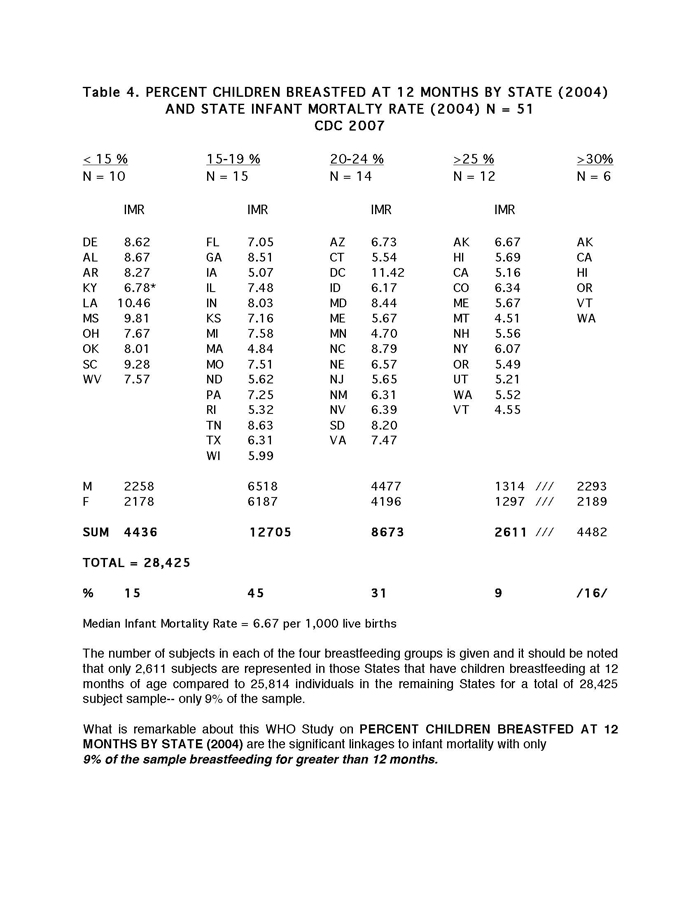 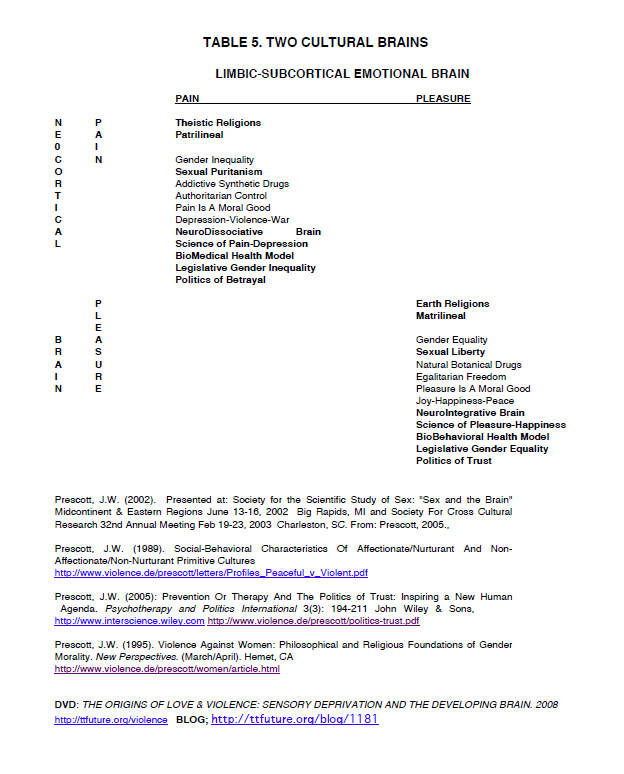 Prescott, J.W. Body Pleasure and the Origins of Violence. (1975) The Futurist April Reprinted: The  Bulletin of The Atomic Scientists 1975: November.
http://www.violence.de/prescott/bulletin/article.html