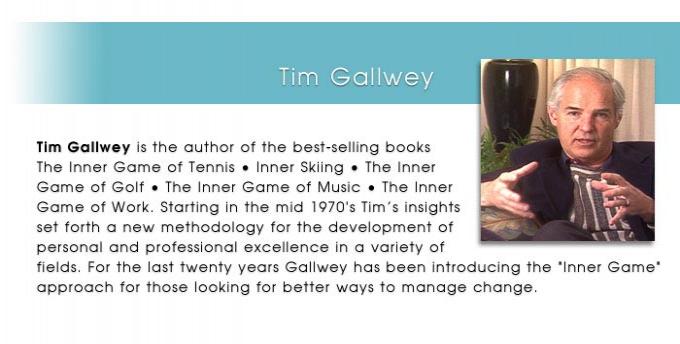 M: What is the Inner Game?

If you have external skills but have fear and doubt, you can't express them or express them in moments of great pressure. When the Inner Game of Tennis was published in 1974, athletes didn't talk much about the mental aspects of the game. Sports psychology was not a field many people went into. Eastern European nations were using it with their Olympic athletes. Since then, people are expressing greater interest in the optimal mind set in sports, learning, and in physical and mental conditioning.

M: What was the inspiration for the inner game?

T: I was an educator and went to graduate school to study change in higher education. Basically, I found it didn't change. My career was in question. I took a year off and started teaching tennis in a traditional way. I'd been well-taught in the traditional school, where to put the feet, where to put the racket, etc.

There was a particular lesson where I turned a corner. A man had a well-known habit, a high back swing that is not easy to change. He cut down on the ball instead of hitting up. I was tired and a little bored so I was just tossing balls. Then a strange thing happened, his racket began to lower before I did any teaching and my reaction to seeing that was a conversation in my head to the effect of, "Darn it, I missed my chance." The chance I missed was to be the one that taught him to do that so that I would get the credit.

The next second, the Inner Game started for me by producing the question, I wonder what would happen if I were more committed to learning than I was to teaching? I started focusing on how students learn, not how well I teach. This led me to wonder what's going on inside their heads when the balls are coming. It became obvious that a lot is going on, a lot of instructions, a lot of judgments, a lot of worries and concerns. This is not the kind of environment that produces either learning or excellence in performance.

When top athletes were asked what's going on in their mind at the peak of your performance, they said, "Not much. If anything, I don't think about it until it's over." I also realized that the student's mind was worried about being judged right or wrong which was initiated by myself. I was a lot of what was getting in the student's way.

I wondered how much I could allow the student to learn with a minimum amount of instruction. I never dreamed that the answer to that question was, "an awful lot." Without technical instructions, I could teach students, who have never played before, in twenty minutes. They would play the game and have rallies of ten or fifteen balls and would never go through the self-condemnation and judgments of the other students. This person would look like he has played for six months. I could do that repeatedly and it didn't seem to matter on the personality of the person.
M: We have a tradition called formulas and one called modeling.

he whole educational structure is built on formulas rather than venturing and modeling. How do those two things fit into your paradigm of the Inner Game?

T: We have a tradition for using formulas to picture the desired outcome and second we have models, people who embody the desired outcome. Both of them seem to undermine the individual's confidence. The message is, there's some external form, whether it's a formula or the way another person is, that you should be like. Both try to fit the student into a mold.

The Inner Game implies that how a person will become is already within them. It grows more like a plant or a tree, which you would never want to force into a particular mold. This has been missing from the educational system for a long time. This is where it actually started. Learning tends to be optimal in our first five years because children can't be told about models. The formula approach is difficult because the form of instruction tends to carry with it a fear of being judged. The right way to do it is really only recognized from an external source. The coach tells you when you did it right and when you did it wrong. The model is better because it's a visual picture, but it's usually misused. A beginner tennis player or athlete in any field is told to look at the best players and do it like them.

That would be like telling an acorn to do it like an oak tree. Acorns shouldn't try to be an oak tree. An acorn should do it like the first stages of an oak tree and not do actually what the advanced oak tree does yet. Learning is an evolutionary process. Many average golfers think that they have to swing the club the way the professional does, but the professional didn't swing it that way to begin with. So this part is missing.

The stages of people, the natural evolution of learning is usually missing from the understanding of the learning process and the coaching process. The more serious thing I believe is the subtle undermining of the person's faith in their own natural learning process and an increasing faith that they out there know what's best. Having said that, I want to add one thing, rightfully used modeling and formulas can be useful if they're not used to replace the student's own faith, then they can be aides to that student of any sport or any skill.