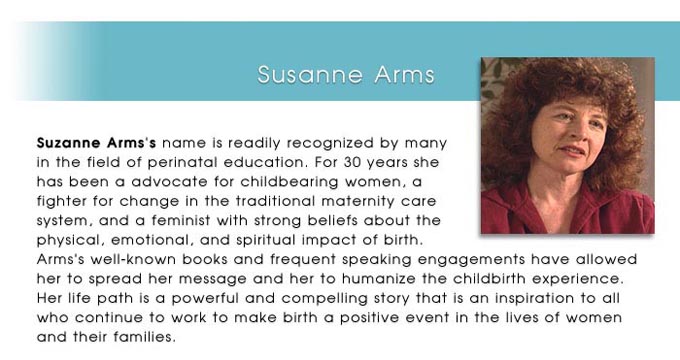 Immaculate Deception was your first major publication in this field.

I wrote a book called "A Season to Be Born" when I was pregnant. It was a way of getting in touch with pregnancy and birth because I couldn't see any births. I was desperate to see a birth. I needed to experience a real birth so I wouldn't be frightened. That was 1969-70. At that time hospitals in the United States prevented friends of a mother, and even many fathers from participating in the process. After that I wrote "Immaculate Deception."

What gave you the insight that you needed to see a birth to reduce the fear you were feeling?

I got pregnant when I was 26. I'd been a nursery school teacher and always loved children. I lived in a little community on the coast. Many people around me at that time were having babies. It was a shock after I got pregnant to discover this fear of giving birth. I didn't know where it came from. I didn't discover until much later that the fear had to do with the way I was born, that it had to do with the experiences my mother went through in her births as well as my own experience. All I knew was I was afraid. All I knew was that if I could be with a woman giving birth, it would be different.

And I found a number of women willing, even grateful that I wanted to be at their births, and on each occasion I was barred from the door of the delivery room. Nobody would allow me for insurance reasons. That wasn't true. There was no insurance available. They didn't want anybody in seeing what went on.

Why do you think that was the case?

It had been a tradition in this country since the beginning of hospitalization for childbirth, in 1914, that nobody witnessed the event except the nurses and the doctors. At a conscious level people believed that was for safety. Fathers could fall and crack their heads if they got nervous. Women were really not desirable. That's one of the reasons they were drugged because they would be out of the way. You didn't have to deal with a woman reaching down to touch her baby and spoiling the sterile field and so on.

But at an unconscious level birth was a deep dark secret, it was a mystery and the medical profession had taken control over this mystery and they didn't want anybody seeing what they did. At some level I think doctors and nurses in these labor and delivery units across the country understood that what they were doing to mothers and babies was harmful. That drugging women senseless and intervening in the process was harmful. That aggressively recessitating these floppy gray or white babies who were totally unable to breathe on their own because of the drugs given to the mother was harmful. I think they understood that the general public would protest if they saw what took place.

I hadn't looked into the anthropological, I didn't know then that it is a common practice all over the world for men and women to grow up seeing birth, for children to be in and around births. I did not know that many cultures considered it essential that a child see at least one birth and at least one death to understand what it was to be human. So we're really one of the first cultures in the world to be wholly deprived of this experience, in babyhood and in adulthood. And not only deprived of this experience but deprived of the experience of seeing a baby breastfed. I actually grew up having never seen a baby put to a woman's breast. I had no idea what the breast was for. I was raised in the late 1940's and early 50's and that was the era when breastfeeding had declined to 10% of 15% of the population and that was largely poor people, farmers, immigrants, not well-bred or educated people. Breastfeeding, like natural childbirth was suspect.

You never saw a women breastfeeding her baby. What did that mean to you?

Breastfeeding was not done if you were a respectable, modern educated person and if you did, you left the social circle. It simply wasn't seen. This was the result of aggressive marketing practices to make artificial formula, artificial milk, seem better. And it was very effective, even today. If you read the surveys being done with young women all across the country, they see bottle-feeding as better for the baby than breast-feeding. They see infant formula as being "scientific".

It is still going on. There have been recent articles about toxins in mother's milk.

It is true that contaminates do get into breast milk. However, artificial formula is mixed with water and made largely from cow's milk. These products have larger contaminating amounts than breast milk. What we're really dealing with is a culture that supports anything artificial over anything normal. We have been led to believe that there's something suspect with normal process, that life isn't good enough as it evolved. We feel it is primitive to do a normal process, that modern intervention is sophisticated and streamlined.

Breastfeeding must occur in a social context. Breastfeeding is a learned behavior. That's very surprising to most people. It is not innate. What is instinctual or innate is for a baby to open it's mouth and to suckle. For the breast to respond by producing milk, to the amount that is withdrawn from the breast, that's the only part that is actually biological or instinctual, the rest requires a social context, it requires observation and learning, which is why breast feeding is really suffering in this country today.

That is why 50% of women who try to breastfeed have serious problems and most quit within the first few weeks. By the sixth week we're down to about 20% fully breast fed babies, when what we need are 100% fully breast fed babies for six to nine months. The world health organization suggests two years or longer. Breastfeeding has a tremendous affect on the whole structure of the mouth and the jaw and on the release of pressure in the jaw and neck and shoulder tension because of how breast feeding occurs, it's not a (sucking sound), but it's actually a movement of the lower jaw. So it affects the teeth and the jaw. It affects touch and nutrients and smell and the many things that go on when a baby is breastfed. But I didn't understand any of this in the early 70's. All I knew was that something was driving me to understand what was going on. I wanted to see and experience women giving birth naturally. Because I knew that if I did, my birth and the way I raised my baby would be different.