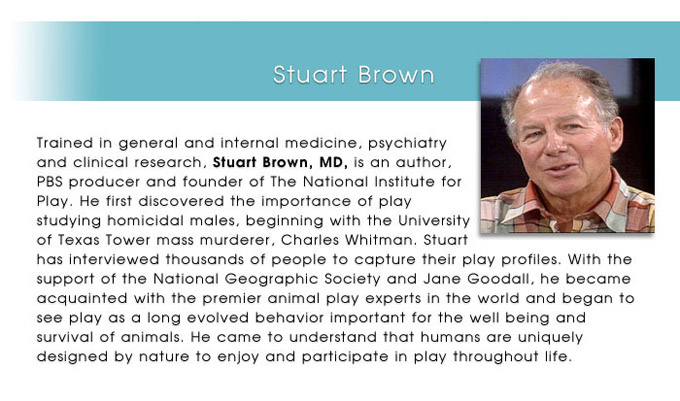 Video Programs with Stuart can be found in the the Intelligence of Play department.

What is shared by mass murderers, felony drunk drivers, starving children, head banging laboratory animals, anxious overworked students and all reptiles?…They don't play. What do most Nobel Laureates, historically renowned creative artists, successful multi-career entrepreneurs and animals of superior intelligence have in common?… They are full of play throughout their lives.

There is something profound about play, yet the full story of play has not been told. Every child, well-fed and safe, engages in play. From the first moments of post-feeding nipple play, to the shared babbling between parent and child, to peek-a-boo and ring around the rosy. The child is energized by and finds its waking hours dominated by joyful acts of play.

Where does play fit into the big scheme of things? An evolutionary look shows that as it has developed over the eons, it closely accompanies the establishment of a large brain and warm bloodedness. The smarter, more flexible and adaptive the creature, the more they play.

Snow leopards box, kelp-laden sea lions play tug of war, otters do most anything in order to play; bats dabble with their sonar, killer whales tease sea gulls, ravens slide down snow banks on their backs, and given the chance wild wolves and grizzly bears play with each other despite their dissimilarity in size and long carnivorous heritage. And humans - they are the champions of play!

Play movements are recognized across species lines, and play signals can be seen in both mammals and birds and are understood by both. Play forms the basis for trust. It reduces the social distance between individuals and assists in the development of more intricate intimate bonds. Authentic play, which occurs whenever the playfulness itself gives more pleasure than any goal associated with it, is the means by which adaptability and flexibility are added to the player's existence. Thus play serves as the grounding core of learning.

My studies of violent antisocial men (murderers, drunken drivers) revealed major play deprivation. Play seems necessary as an antidote to the development of violent tendencies as well as a partner to effective socialization.

Play and games seem necessary for the development of community, which requires mutual trust, cooperation and common goal setting. They are necessary to develop a sense of future optimism and perseverance. Handicapping, the play induced behavior where the strong voluntarily withholds domination in a situation of unequal power, is learned in the crucibles of solitary and social play by all social creatures. For humans, play is also surprisingly active in the shaping of one's own inner private narratives (actual sense of self), and thus is directly related to mental health and elasticity. It is also the means by which we shape a model world.