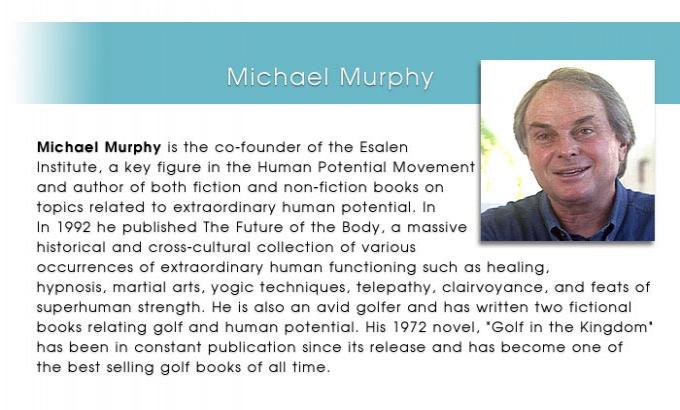 In the Zone, Transcendent Experience in Sports

You and I and every living creature are part of an evolutionary adventure and we're in the business of graduating to a richer life and we all have the opportunity to choose that or not, in different ways. All of our attributes, our mental attributes, all our emotions, our perceptions, the body itself give rise to extraordinary versions of themselves. I wrote about this In the "Future of The Body". Every human attribute has a meta-normal expression and you see this across cultures, among men and women, young and old.

Perception, for example, there are more and more extraordinary forms of perception, communication abilities, energy, vitality, will-power, abilities to know, cognition, our very sense of self can graduate. People say, "this is who I really am, this is my deeper self." That philosophy of an integral transformation, is at the core of "Golf and the Kingdom."

It's all in the spirit of play and it turns out sport is really a western yoga. at it's core when pursued with passion and for it's own sake, it becomes a transformative practice. The problem is, for most athletics in the west, there is no philosophy, no psychology, no context in which to understand sport in its larger dimensions. You get there simply by playing the game, which in a way is wonderful, it keeps us away from what in the Zen is called the "stink of Zen," from becoming too self-conscious, from talking it to death. It keeps us away from that because you're playing simply either for fun or to win this game or to excel. So the play keeps you clean. There's purity about sports.

I think sport sports needs a philosophy that will be adequate to the experience that the sport is eliciting. Then you can come back to the sport and participate in a better way. Winning is important, excelling is important, it's crucial, but it's not as important as how you play the game, how you live your life. This tremendous possibility we have to surrender to this greater being that's trying to emerge in us. It's like our higher self, our greater self, it's like this giant that's chained and we're all like the little people who have chained the Gulliver in us down and in sports Gulliver gets loose for a few minutes. The challenge is to bring sport into alignment with this larger being that's trying to manifest?

It's there in Star Wars, the force and Oby-One-Kanobe training Luke Skywalker to hit a moving object with his eyes closed and to knock out the death star by relying on the force rather than on the computer. It's in the public consciousness now, this marriage of mind and body and spirit. And this idea that human race has the possibility to mutate to a higher level of functioning. It's in the air. It's a lot more than just new age. The new age has been here 4000 years. It's new in comparison to the evolution of the universe which is 15 billion years old, but it's certainly not new in terms of human culture.

All the ways of marrying; spiritual, mental, and physical and emotional practice, and doing it in ways that's fun. It's child's play, like the these games they play, Dungeons and Dragons, they're actually full of this stuff, and it's finding its way in. So, play is the royal road for children and setting an example, creating contexts, finding programs in school and outside of school that are rich with it, that's the way.

Every kid has got to learn the basic lesson that you're not your score on the test, or on the golf card, or the baseball game. You're not the score. But I think it's a function of the human spirit to compete. It's a deep involuntary constant irreversible drive to play. People won't behave. People will play. That's why moralists are always gnashing their teeth and turning their head, because people play all the time and they play in different ways.