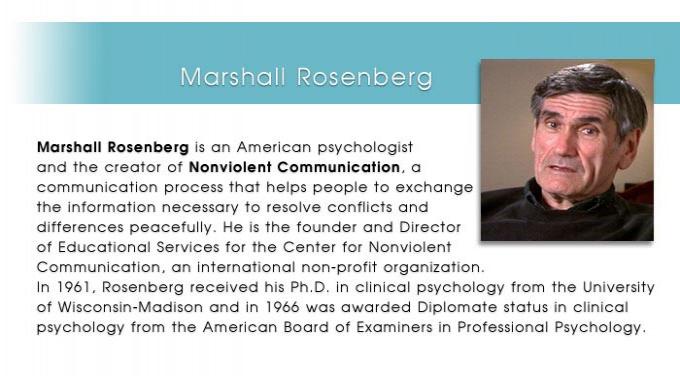 Our training centers on the literacy of feelings and needs, which is quite different than that which people have been trained in. Instead of speaking a language of life, a language of feelings and needs, most people have been taught a language of criticism, moralistic judgments, analysis and diagnoses. They're trained to say to other people, "the problem with you is…", and they have a wide vocabulary for telling people what wrong with them. Any language that sounds to other people like a criticism, we suggest is a tragic way of expressing that your needs aren't getting met. Another form of communication that contributes to violence and which makes it hard for compassion to take place is any language that denies choice. Language of "have to", "should", "ought", "must", "can't".

What do you mean by violence?

Most people refer to violence as physically trying to hurt another. We also consider violence any use of power over people, trying to coerce people into doing things. That would include any use of punishment and reward, any use of guilt, shame, duty and obligation. Violence in this larger sense is any use of force to coerce people to do things. Violence is also any system that discriminates against people and prevents equal access to resources and justice to all people. By this definition many aspects of our corporate culture, parenting, athletics and formal education could be considered violent.

John Holt wrote a book about education, How Children Fail. I got to know John when he was alive and we worked together at times. He said, "If we taught children how to speak, they'd never learn." We don't use punishment and reward to teach children to speak. They learn because it enriches their life, it opens up possibilities. Why would we ever want to teach anybody anything except for that reason? And if it enriches life, you do not need punishments and rewards.

Michael Katz wrote a book, Class, Bureaucracy and the Schools. One of the political functions of schools is to train people to work for extrinsic rewards. The economic system needs workers to do things that may not really enrich life, may even pollute the environment. It needs compliant workers to maintain the system. Schools do this by having young people believe that the goal is to get grades, to work for external rewards. John helped me to see that the learning environment, the structure itself, was set up in a way that prevented the majority of children from doing well. He helped me see that the structure was the problem, not the children.

And this is what you mean when you say that most schools are inherently violent?

Yes, there's a great violence. According to Michael Katz and other researchers, schools were designed to prepare people for a life within a domination system in which a few people benefit from the efforts of many. The same problems have existed since the beginning of public education in the United States.

About every twenty years new reformers come along with new ideas for fixing it. The reformers, against great resistance, get their educational ideas into the schools. By educational standards they're very successful. Children learn more. They enjoy learning more. And within five years the reform programs are gone. Why does this happen? Schools were never set up to educate. They were set up to maintain an economic system, which requires people to work for extrinsic rewards and not to look at the value of what they're doing.

One of the things that I discovered in graduate school was how dangerous it is to look at psychology separate from social structures, to believe that suffering was created only by something wrong with people. That's why I have built into our training ways to liberate ourselves from what we have internalized from these oppressive structures, but that also show us how we can transform domination structures into life serving structures.
Nonviolent Communication involves four basic steps. What are they?

Of the four components that we teach, three of them answer the question, what's alive in you? One of them is, what are you reacting to? What is either making life wonderful, or what isn't? It's very important to identify this, to be specific about it. We call that an observation. Can you make a clear observation without mixing in any diagnosis, any evaluation. Next, how do you feel about what you're observing, and what needs of yours are connected to your feelings?

Observation is what people are doing then, how do you feel, and what needs are related to this? And finally, what would make life more wonderful? Make a clear request. Who would you like to take what action to meet your needs?

The other part of the process is receiving the same information back from other people, regardless of how they communicate. In this respect, we show people how to translate any message that comes at you into what that person might be feeling, needing and requesting.

Why isn't this the basic foundation for all our communication?