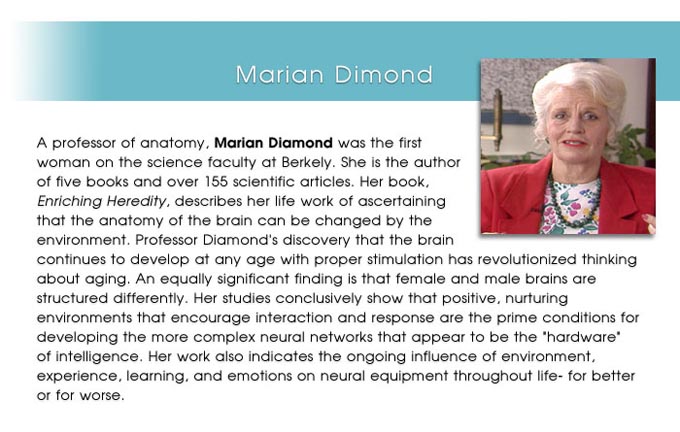 Your work implies that the brain and nervous system is physically molding (adapting) itself to the environment moment to moment. What does that mean?

The brain is growing most rapidly right after birth. This explosive development of fibers receives stimuli and grows branches. The number of potential connections are vast. There are a hundred billion nerve cells in a brain and many of those make connections with thousands of others. A single nerve cell can receive input from 20,000 other cells. Just think of the computation that goes on in a single cell before it fires. The interaction of the environment with this system is extremely dynamic.

What is the relationship between the development of these connections and what we call learning?

Learning is essentially the formation of these new connections. We are growing these branches while we're learning. We've been able to show this in the laboratory with rats learning to solve mazes. We measure the cells afterwards and find more branches on those cells that have been challenged and are learning, versus those cells that are inactive.

Most of us think that our brain's capacities are hard wired and fixed.
When we first presented our work way back in 1964, I remember one man stood up and said, "I'm sorry, but the brain cannot change." And I said, "I'm sorry but we've been able to show that it does." Now, most people in the scientific world say yes, the brain's like a muscle. When you use it, it develops larger nerve cells, including the cell body and all of its branches and connections.

What are the implications of your research when we look at the changes that are occurring in childhood today?

We live in a multi-sensory environment and the brain is designed to receive many types of sensations. When it is developing, we should give it the opportunity to utilize a wide range of input, rather than single tract. As technology enters that might focus children in narrow channels, it's very important that we develop whole factions. We are multi-sensory and we need the whole cortex so that it's ready to handle the problems of this complex world, rather than narrow focused learning.

The idea of nature/nurture has been around for centuries. What impact does your research have on the balance between our innate potentials and the external stimulus needed to develop them?

We've found certain parts of the brain to be extremely plastic and changeable. Other parts are not. Many of the older parts of the brain stem do not change. They're closer to what you call hard wired. We've looked into all 15 different parts of the brain to see what's moving and what's not and these older areas don't move as readily as the more recently evolved areas, such as the cerebral cortex. It seems to be the most plastic of all.

We do not find this basic brain stem to be very changeable. It's dealing with fundamental functions such as appetite, thirst, sexual behavior, temperature regulation, heart regulation, and respiration. But the higher cognitive processing is taking place in the newer mass and that's where we find we can change so readily. We can change this cerebral cortex structurally in our rats and measure the increase in dendrites in just four days.

We used to think of the brain as fixed and believed it would take centuries for the brain structure itself to change.

We have measured physical increases in the brain in as little as four days and this change also was reduced very quickly with disuse. It is important to stress the importance of use versus disuse.

The brain only grows if it's challenged, but over challenging it causes it to close down and atrophy as well. How did you explore this in the laboratory?

The question we've asked for many years is what is enough stimulation and does the brain have a stimulation ceiling? Will it continue to grow with stimulation or will it stop? We designed an experiment where we changed the toys for our rats much more frequently than normal and we found that their brains didn't continue to increase. The rats just didn't interact with the toys as much when we were changing so frequently. I think it's the same with children. When you get too much going on in a room they shut down and don't really interact with much of anything.

Part of your work empathized that the brains capacity to learn transcends age.

We have measured increases in the brains of rats whose mothers had been living in enriched environments. So we've shown an increase prenatally and also early postnatal, as young-adult, middle-aged, and extremely old age, the equivalent of 90 year old people. 900 day old rats are very old rats, but we've still shown if we put them in enriched environments, roughly in middle-age, and then follow them to the equivalent of 90 year old people that we can change that brain. The brain has the capacity to learn and develop throughout your life, providing it's healthy.