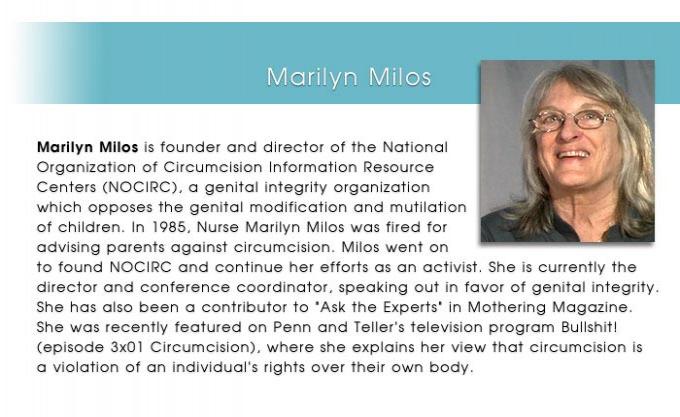 M: You’ve been challenging the prevailing assumption that circumcision is normal and necessary for many years. What brought you to the point where you focused your life on this issue? Was there an experience that caused you to take up this challenge?

Mi: I have three circumcised sons and, when they were 20, 17, and 10, I was a nursing student. I’d gone back to school to become a Certified Nurse Midwife. While I was in my last rotation, in May of 1979, I saw a circumcision for the first time. Students filed into the room, which was actually the nursery, and the baby was on a Circumstraint, the plastic molded board that holds the baby down, strapped spread-eagle and struggling against the restraints. Nobody was with the baby. He was just on the counter by himself, making the same kinds of sounds you or I would if we were being restrained—and getting louder and louder and more and more frightened.

I said to my instructor, “May I comfort the baby?” She said, ”No, wait until the doctor gets here.” I looked to see where the doctor was, and he was scrubbing his hands and telling a dirty joke to the nurses who were standing by. I thought, isn’t that interesting? When he came in, I said, “May I comfort the baby?” He said sure, “Stick your finger in the baby’s mouth,” which I did, and I stroked the baby’s head. I said the same things to the baby that I had heard before my sons had been circumcised, “It doesn’t hurt, it only takes a moment, and it’s crucial for good health.”

So, I was stroking him and saying these things, lying to him, really, because, when the doctor started to do the cutting, the baby opened his mouth and let out a scream I’d never heard come out of the mouth of a baby—and I had four children.

There I was, standing in front of my instructor and all the other nursing students, realizing that I was not going to be able to hold it together. My bottom lip started to quiver, my chin started to shake, and then tears just welled up and streamed down my face. The doctor looked at me and said, “You know, there’s no medical reason for doing this.” Perhaps, had I not heard those words, I would have reacted to this like I did so many other things in nursing school. You watch and think, oh, this is awful, but it’s for something good. But, to hear those words sent me into a tailspin, and the realization that I had to find out what this was about.

I began to research the issue. In the next months, I wrote to everybody I could think of, trying to get some information on the subject. Edward Wallerstein’s book, Circumcision an American Health Fallacy, was sent to me, and I read it in three days. Wallerstein’s gift to us, in recognizing that circumcision is not a medical issue, was to go back through all the research with a fine-tooth comb and point out methodological flaws and researcher bias for all the research that validated circumcision.

At this point, the American Academy of Pediatrics had said there is no medical reason for doing it. Once I started to work in the labor and delivery and postpartum areas of the hospital, I began to tell parents what I wish someone had told me.

It was six months or so, then, when they said, “Marilyn, there’s somebody on your shift upsetting patients with circumcision information.” I said, ”Nobody would do that. No one would do anything to upset patients.” I came to find out they were talking about me! And, they told me to keep my mouth shut. I said, “I’m educating, and I’m doing it nicely. I’m not hounding anybody! I think every parent has a right and an obligation to know what’s going to be done to their son behind closed doors, not only to protect their son from a traumatic experience, but also to prevent mothers from feeling the same way I felt about not knowing enough to protect my own babies.

M: What kinds of things were you saying to the parents?

Mi: “I see that your baby is scheduled for a circumcision in the morning. Are there specific reasons that you’ve chosen to have him circumcised?” “Well it’s cleaner.” I would say, “Do you know that the American Academy of Pediatrics says soap and water offer all the advantages of circumcision, all the benefits, without the risks of surgery?”

“Circumcision is a surgery? Does it hurt?” “Yes, it hurts the baby.” “Do they cry?” “Yes, they scream.” “I didn’t know that.” So, you can see why people would be upset with this new information. I was told by the hospital that new mothers are very fragile and this is not the place for them to hear this information or to be upset. They told me, “It’s the doctor’s responsibility to teach the parent about these things.” “If the doctor hasn’t done that, somebody better,” I said. “If they haven’t heard it before now, this is the last chance. Somebody had better say something to them.” Again, tThis is not an easy message. What mother wants to hear her baby is going to suffer needlessly? What man wants to hear he was strapped down, tortured, mutilated, and the most sensitive part of his penis was thrown into the trash can? Nobody wants to hear that. What doctor wants to admit he’s done this for no medical reason? I was very alone during those early days, giving out information that most people didn’t want to hear. By the way, it’s gotten a lot easier.

M: Why don’t people want to hear this information?

Mi: No one wants to hear the truth about what we’re doing to babies behind closed doors. We’re torturing and mutilating babies and nobody’s talking about it.

Not one national or international medical association in the world, including the American Academy of Pediatrics and the American Medical Association, recommends routine infant circumcision and now, recognizing the harm and life-long consequences, some are recommending against it.