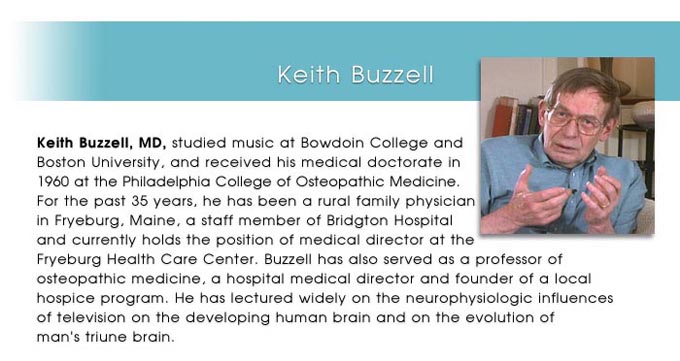 View/Download Complete Interview
Going Beyond Self As Image

In the 1950s, I found the works of Gurdjieff, who had introduced the concept that human beings have not one but three brains. This was 50-60 years before Paul MacLean's began his work on the "Triune Brain." Gurdjieff developed a sophisticated view of three-brained beings and talked about many of the issues to which Paul has given a neuro-anatomical foundation. As a physician, when I came across MacLean's work, it created an explosion of connectedness between Gurdjieff''s views and modern neuro-physiology.

What do you mean by human beings having three brains?

Over 600 million years ago, with the appearance of the cold-blooded vertebrates, there appeared sensory systems, which could construct a resonant representation, or image, of some portion of the external world. The life of cold-blooded vertebrates, what I call one-brain creatures, is determined by the spectrum of sensors and imaging capacity of this basic core brain. The primary function of this reptilian brain is survival, focused around the triad of food, reproduction and defense.

What is your definition of a brain?

A brain really should be called a brain when it has developed the capacity to take a slice through all of the variable forms and energies; out there, and build a resonant representation or an image of the external world. And then, within the confines of that creature, act upon these images for survival. Then you have a brain.

The world is defined by the range of sensitivity of its sensors emanating from the brain.

Once the first brain becomes well-established as a whole sensory/motor instrument, which occurred about 200 million years ago, elements of what MacLean refers to as the Limbic Brain, or the Second Brain, began to appear.
Actually elements of this second brain begin to appear long before that second brain could be called a whole brain. The critical difference is that the world that the second brain opens to is not the world "out there" beyond the bounding membrane, but the inner world of dynamic metabolism and motions.
All sensory instruments are an extension of a brain, whether it's the core brain looking into the outside world or the second brain interfacing with the inside world, or the third brain which interfaces with both of those brains. In each case, a system of sensors feed back data, which the brain uses to construct a resonant representation of the energies and forms, which that particular sensory system opens to. They are all images.
First brain images, because they are created via data from a world beyond the boundary of the creature, are relatively concrete. They are, you could say, literal images. When we come to the second, emotional or Limbic brain, it's much more difficult for most people to see the image.

Perhaps it would be helpful to introduce the term, self-image. What do we mean by self-image?

We are looking at pride, vanity, a presumption of honesty, of strength, of purpose, and anger. Externally we see these states expressed as postures, gestures, tones of voice and facial expressions. We can see anger and hostility, suspicion and fear. We see satisfaction, constancy or hesitation. We see maternal love expressed between many mammalian forms. We are looking at the external image reflected through this inter-penetration of the first brain muscular system by the second brain. That inside state is an image because it is not a material 'whole' of anything. The organism has sampled a variable range of energies, which reflect the internal state. We experience that reflection or image as "self".

So we now have two brains.

With the evolution of the second brain special chemicals, called neuro peptides, report to the brain the inner state of the body. Candice Pert, formerly of the National Institute of Health, calls them the "chemicals of emotion." The important differentiation is that the world of the second brain is a world of both neural and chemical formation and function. It isn't just the nervous system alone. Now there's an play of inner and outer images. It is important to keep in mind that our emotional world is very rarely composed of one feeling. Each moment may be filled with a kaleidoscope of emotional images. We can be happy, sad, depressed, and joyful simultaneously. We can be happy and sad at the same time. When your child goes off to school for the first time, you're standing there with a big smile on your face. But she's also begun to separate and enter the "outside" world, so you get tears coming down your face. All this is happening at once. How we feel, our emotional state, can be a complex flow of multiple experiences.

View/Download Complete Interview
Going Beyond Self As Image