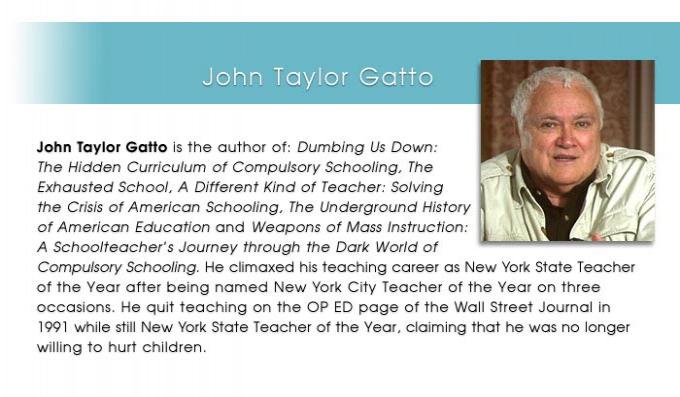 What if everything we think about schooling is wrong? What if hidden forces were inserted into the public education system that prevents it from developing imagination and real critical and creative thinking in most students? What if the game is rigged, like a crooked roulette wheel, so the majority lose rather than gain from the experience.

Quotes from our interview:

Create a national system of training that would make it impossible for underlings to imagine any other way to do things.

Schooling does the same thing as television but does it in a diferent way!

Concerned people have been trying to reform public education from its inception. One voice has taken this challenge to its final conclusion – put an end to government controlled compulsory schooling as it was designed and is imposed today. Why? Because, as John’s latest book, Weapons of Mass Instruction, points out, everything we know about schooling is wrong. In quantifiable terms – the more standardized and costly schooling becomes – the less literate and truly educated the population grows. What if this is not a mistake!

“At the start of WWII, millions of men showed up at registration offices to take low-level academic tests before being inducted… Eighteen million were tested and 17,280,000 were judged to have the minimum competence in reading to be a solder – a 96 percent literacy rate.

WWII was over in 1945. Six years later, another war began in Koreas and several million more men were tested for military service. This time 600,000 were rejected. Literacy in the draft pool had mysteriously dropped to 81 percent…This group had more years in school, with more professionally trained teachers, and more scientifically selected textbooks than the WWII men. Yet, it could not read, write, count, speak or think as well as the earlier, less-schooled contingent.

A new American war began in Vietnam in the middle 1960’s. By its end in 1973, the number of men found non-inducible by reason of inability to read safety instructions, interpret road signs, decipher orders – the number found illiterate in other words – had reached 27 percent. Vietnam-era young men had been far more intensely schooled than either of the two earlier groups, but now the 4 percent illiteracy of 1941, transmuted into the 19 percent illiteracy rate of 1952, was (in 1973) 27 percent.

By 1940, literacy as a national number stood at 96 percent for whites and 80 percent for blacks. Four of five blacks were literate in spite of all disadvantages. Yet, six decades later, the Adult Literacy Survey and National Assessment of Educational Progress reported a 40 percent illiteracy rate for blacks – doubling the earlier deficiency – and a 17 percent rate for whites, more than quadrupling it. Yet, the money spent on schooling in real terms had grown 350 percent.

From Weapons of Mass Instruction

Is this some gross mistake? Or, as John has extensively documented, this was and is by design.

M: It took you 30 years living inside the system we call school to arrive at the radical conclusion that this massive institution was not designed to develop true potential – but rather to limit, constrain, as you say Dumb Down that potential.  Basically you are a whistle blower.

J: It wasn’t my intention but that is what happened.

M: The bell rings in a Pavlovian way and we take our children that we dearly love and we put them on this conveyor belt for twelve or more years and don’t ask any of the basic questions you raise.  Why is it so hard for most of us who have been so deeply conditioned by this system to see that the king has no clothes?

J: They may have an intuition, but parents are involved in making a living and mowing the lawn and walking the dog, burping the baby. There’s so many distractions that I think we end up taking what seems to be a perfectly rational gamble because everyone else is taking it.

It’s fascinating that you and many other people say that I took a radical stance. I was one of the Founders of the New York State Conservative Party. I was an Officer of the Party for about 20 years until it dawned on me that no one in the Party was conservative. The radical label is mis-applied. I’m not suggesting anything that hasn’t been established and documented by long experience in human history. To me that’s conservative.

M: Part of your thesis is that the true purpose of compulsory government schooling is conditioning, conformity, rows of chairs, routine, bells. Jerry Mander, author of the Four Arguments for the Elimination of Television, uses the phrase ‘form is content.’ The form of public schooling is its content.

J: Jerry is one of my heroes.

M: His insights, in my view, have never been equaled. Marshall McLuhan said the same thing about television. The true content of the television experience is the relationship we have to the box, not what is flickering on the screed. This notion that the form of the system, the structure, is that system’s primary content, is your underlying thesis.
You are not talking about the math, reading or history. You’re talking about the structure being the real content of what is being learned, not learned - deeply conditioned. Form is content. We’re learning how to conform and part of this conditioning is to not question the structure.

J: The architects of institutional schooling were completely conscious of this. I’ve encountered some intriguing passages that state openly that habit training and attitude training is imposed by the structure. This is what mass schooling is really all about. These observations were not coming from outsiders or radical sources.  They were coming from the very center, Alexander Inglis, around the First World War, wrote a book, it’s very, very hard to get, called “Principles of Secondary Education”. In one section, he lists the purposes of what we call schooling. There’s six - everyone is illuminating - and hair raising.

Darwin was a big influence, but it’s not the Darwin that is sold in school text books.  It’s not the fellow curious about nature.  It’s a fellow absolutely certain that animal trainers and plant breeders had discovered the operational truth of human life.

And that they have supplied, I’m citing from Darwin’s “Descent of Man” which is about 12 years after Origins of Species, and made a much bigger impact, that the overwhelming majority of human biology is fatally corrupted. It cannot be improved by cross-breeding because it’s so far gone. And if we cross-breed the mass with the evolutionarily advanced this will drag everyone back into the swamp.

That book probably has caused more damage than any piece of writing in human history.  It was immediately adopted by the managerial classes of the planet. You had to find ways to lock up the evolutionarily retarded, to waste their time and set them against one another.  And whatever you did, keep them away from the good stuff! There was no evil intended - quite the reverse.  They were taking human improvement into their own hands.
In the United States there was a seminar course taught by the President of Indiana University, David Starr Jordan, a legendary name on the West Coast. Jordan called the course Bionomics. The idea was to take charge of evolution by reducing the breeding propensities of the inferior.

As Darwin said in Origin of Species, only mankind is stupid enough to allow its inferior stock to breed. What Jordan did was to organize a class that would politically and intellectually take charge of this. Who was the President of the University of Indiana?

He turned out to be the first President of Stanford University, the Harvard of the West, a position he held for 30 years. What we’re really talking about is a deliberate and massive retardation of normal human growth processes and the monopolistic assumption of responsibility and decision making so the challenge of reducing inferior breeding can be conferred on a managerial group.

M: I get the impression of creating a pen, herding together the masses, feeding them mediocrity, structuring and conditioning them in ways that insure that they don’t cause any trouble, so they can be predicted and controlled.

J: Well said. Let’s start five centuries ago when John Calvin, who seemed to me the most influential theologian of the last fifteen hundred years.  Calvin says clearly that the damned are many times larger in number than the saved.  The ratio is about twenty to one. There are too many damned to overwhelm with force.  So you have to cloud their minds and set them into meaningless competitions with one another in ways that will eat up that energy.

Jump from Calvin to a thoroughly secular philosopher in Amsterdam, Benedict Spinoza who published a book in 1670 that had a huge influence on the leadership classes of Europe, the United States and Asia. It’s called “Tractate Religico Politicu.”

In it he said it was nonsense to think people were damned or evil because there was no supernatural world. He also said there’s an enormous disproportion between permanently irrational people who are absolutely dangerous and the people who have good sense. The ratio is about twenty to one. Spinoza actually says that an institutional school system should be set up as a ‘civil religion.’  It’s a term you find common in early colonial writing because everyone read Spinoza, all over the planet.

He said we need a ‘civil religion’ for two reasons.  One, to eliminate official religion, which he says is completely irrational and dangerous.  And two, to bind up the energies of these irrational twenty to one and to destroy their imagination. In all but words said the same thing as Calvin, but Spinoza said it flatly. We have to destroy the imagination because it’s only through the imagination that the maximum damage is unleashed. Otherwise people can struggle against the chains, maybe even cause local damage, but they can’t do much harm to the fundamental structure because they can’t think outside of the box.

Jump from Spinoza in 1670 to Johann Fichte in Northern Germany in 1807, 1808, 1809, where the very first successful institutional schooling in the history of the planet, was established.

Ficthe says in his famous Addresses to the German Nation, that the reason Prussia suffered a catastrophic defeat against Napoleon at Jena was because order was turned on its head by ordinary solders taking decisions into their hands. He called for a national system of training that would make it impossible for underlings to imagine any other way to do things. A decade later Prussia had the first institutional form of mass schooling on the planet.