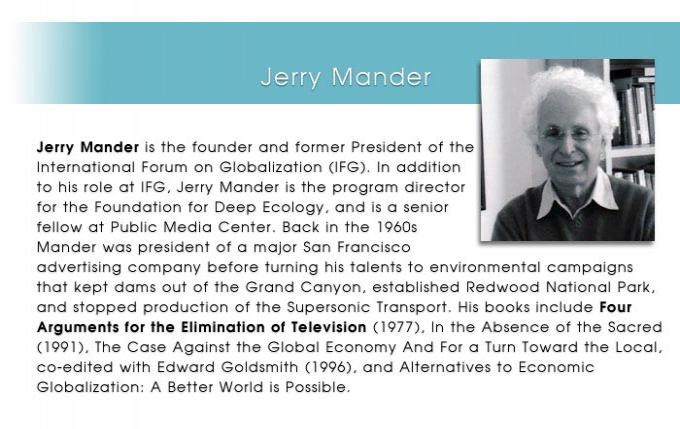 Many people in advertising are aware of that feeling and don't like it. But they're hooked on the lifestyle and the money. They're hooked on the power and don't see a way out. We need to ask, What is advertising? Billions of dollars are spent every year to encourage people to live a certain way and all the ads are identical. One's advertising a Ford. One's advertising toothpaste, but the goal's the same. The average viewer gets 22,000 of these powerful messages each year on television. 22,000 messages telling you that you are not adequate and that the only thing that will satisfy your inadequacy is a product, which must be bought.

What are the four arguments for the elimination of television?

There are really hundreds of arguments, which are described in four categories. The first is Environmental. The second is Political. The third is Personal in terms of personal consciousness. And the fourth deals with Communications, what kinds of information pass through the media, and what kinds don't?

The fourth argument explores how television threatens democracy. Television accepts certain kinds of information while rejecting others. Conversations like this would be boring on television and yet violence, sex and sports work well. The medium has a built in bias.

From the Four Arguments
For the Elimination of Television
Jerry Mander, 1978
Replacement of Experience

America had become the first culture to substitute secondary mediated versions of experience for direct experience of the world. Interpretations and representations of the world were being accepted, as experience, and the difference between the two were obscure for most of us...
People's patterns of discernment, discrimination and understanding were taking a dive. They didn't seem able to make distinctions between information which was preprocessed and filtered through a machine, and that which came to them whole, by actual experience...
If people believed that an image of nature was equal to or even similar to the experience of nature, and were therefore satisfied enough with the image that they didn't seek out the real experience, then nature was in a lot bigger trouble than anyone realized.

The Illusion of Neutral Technology
Far from being "neutral" television itself predetermines who shall use it, how they will use it, what effects it will have, on individual lives, and if it continues to be widely used, what sorts of political forms will inevitably emerge.

Sensory Deprivation
Our environment itself is the manifestation of the mental processes of other humans. Of all the species of the planet, and all the cultures of the human species, we twentieth-century Americans have become the first in history to live predominately inside the projections of our own minds.

The Inherent Need to Create Need
Advertising exists only to purvey what people don't need. Whatever people do need they will find without advertising if it is valuable... Advertisers sell their services on the basis of how well they are able to create needs where there were none before. I have never met an advertising person who sincerely believes that there is a need connected to, say, 99 percent of the commodities which fill the air waves and print media... In fact, advertising intervenes between people and their (real) needs, it separates them from direct fulfillment and urges them to believe that satisfaction can only be obtained through commodities.

How does this bias affect our experience and the programs we see on television?

Television exploits a genetic fight-flight tendency in human beings. When living in pre-industrial environments we had to be aware of changes in the environment to survive. Television comes along and presents images which triggers the same survival response. If something violent is happening on television, we react. We may be intellectually aware that the violence is not "real" but our emotions don't discriminate. They react. It is part of our survival reflex and advertisers and programmers exploit this tendency as much as possible.

To exploit means to use something to one's advantage or to take advantage of another's weakness. Advertisers, and the corporations they serve, are extremely sophisticated in exploiting television in this way, especially when it comes to children.

It became very clear, observing my kids watching television, that they were entering an artificial reality, one where people no longer remember what the world was like without television. It is a reality cut off from the natural world - one created and controlled by a limited number of corporations to sell products people really don't need. I was very, very worried about that and with good reason. We already have a generation of people who don't know that there was ever a world without a television. They can't imagine what life would have been like without television. Look how we have moved through the technological age and how it has established a new reality, which has no relationship to the intrinsic values of nature. This is tremendously tragic and the main reason I wrote the book.