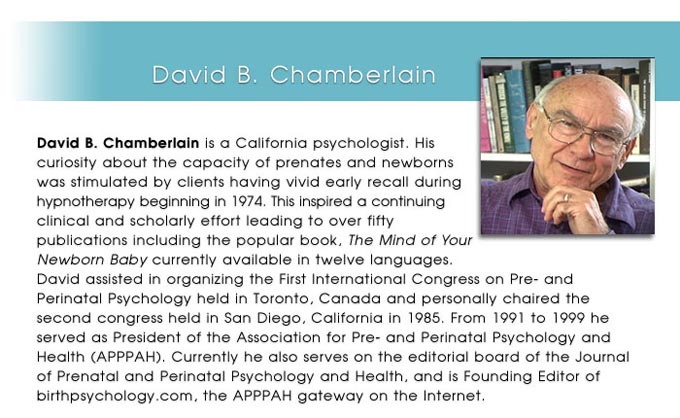 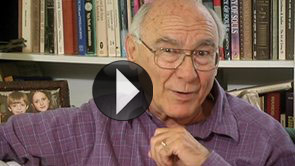 View/Download the Complete Publication
Babies Know More Than You Think

One of the more dramatic illustrations of intelligence in the womb comes from being able to see what's happening in there on ultrasound. This allows mothers, for example, to watch while the doctor does the procedure of and doctors and mothers look at what's happening. Their business, of course, is to take out a few ounces of liquid,which they can use for tests. In one case the baby was seen to constantly bat against that needle that was entering the space. In other cases, the baby has actually been able to grasp that needle, and in still other research the baby has retreated, obviously trying to escape from that intruding needle.

Well, when you consider the fact that amniocentesis is usually not done after 20 weeks, it gets more and more dangerous to do that so they want to do it early, early would be before 20 weeks, at that time the development of the brain is not very impressive. It's only half cooked, you might say, and, furthermore, the eyes of the baby are still fused. They stay fused till about 26 weeks.

What can you say? Is it psychic? Does the baby have sonar? Even so, it's very intelligent use of sonar to be aware that that's there or try to get out of the way or do battle with it. The old ways of thinking about the brain and intelligence simply don't help us to explain evidence of this kind.

It seems amazing that a fetus that is only this big, and in no way fully developed, could be aware of, and able to respond to, what is going on around it. How does this relate to everything we've been taught about the brain and the nature of intelligence?

Scientists believed that the more brain you had, the better off you were, of course, and they generally believed that the early parts of the brain to show up in development were doing simple things and were not able to do complicated things, that as the brain built up across the months, they finally had nine months of full-term development of the brain, you still had a brain that was only one third of its final size and mass and so on, and it had obvious inadequacies. It didn't have this and it didn't have that. A great deal of emphasis was placed on the cerebral cortex as that special part of the brain that allowed us to do our thinking and so on.

And now we're learning that there's much more than the brain that is part of the intelligence system. The brain and spinal cord is referred to as the nervous system, but in addition to that and linked in with it now is the endocrine system and the immune system; so these three systems together never function separately, really, and we can only hope to appreciate the intelligence of a baby before or after birth by looking at the entire fluid intelligence system. And it turns out, of course, that the chronologies are all different from what we thought they would be if we just focused on the brain itself.

In an auto assembly line you don't expect a car to work until that last part is put in there and it's got everything working together. This isn't true about the brain. The brain is working right from the start. It does more and more and it's quite mysterious how those different parts of the brain work with each other, but what we know is you do not have to wait for the finished brain to expect a working mechanism.

Much of your research has focused on the ability of people to remember what happened to them around the time of birth and even in the womb.

It's a mystery still, but in hypnosis, in a trance state, a slightly altered state from the usual consciousness, people can do amazing things with their mind, and one of the things I found they could do is remember things that you would never expect anybody to be able to remember. This came out of the blue. I wasn't expecting, I wasn't asking for it, I didn't really know that people can go specifically to birth if I asked them to.

When did you first realize it was possible for people to have memories that early?

I think this was in 1975, and since that time I've had just a steady stream of very early memories, not only age one or two but many, many birth memories and prebirth memories. In my experience, it doesn't seem to make a difference. People can access any of those times equally well.

From the usual framework of scientific thinking, we've been taught that no baby is capable of remembering its birth or before birth or, for that matter, even the first month of life.

The reason for that is our way of thinking about babies has been pretty materialistic. That is, it's been based on anatomy, on matter, specifically, brain matter, and we judged people, babies, by the amount of brain matter that they had, and we made the presumption that unless they had a lot of brain matter and particularly the kind of brain matter that comes at the end, the cortex, the full development of the cortex, we thought they would not be capable of any sophisticated mental processes, including memory and learning. Virtually everything that we know now of a scientific nature has come to us only in the last couple of decades. It's all new.

View/Download the Complete Publication
Babies Know More Than You Think