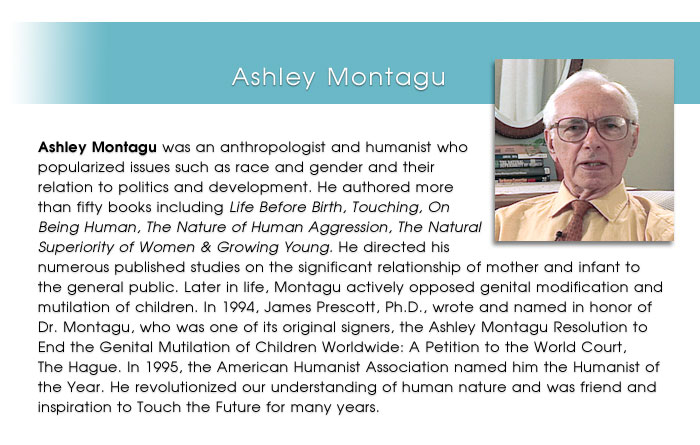 It always puzzled me - why human beings were the way they were. Trying to understand why women and men were as they were led to my book, The Natural Superiority of Women, why education wasn't what it should be led to my book Education and Human Nature in the Direction of Human Development, why aging isn't what it should be led to Growing Young, and so on.

I studied anatomy, embryology and zoology and the science of heredity. At the same time, I studied cultural anthropology and the history of science and medicine. All that early experience determined what I would become by way of solving this question, "what are human beings born for?"

Question: And what did you discover?

The species characteristic of homosapiens, which by the way is the most officiously arrogant and primitive definition ever self-bestowed by a species. "Homo-Sap" is the appropriate definition at the present time, because he has become so confused as a creature, at the same time being the most intelligent. When you put intelligence and confusion together you really don't get intelligence, you get a terrible mess.

To be born human is to be in great danger because you are free of the instincts which largely determine the behavior of other animals. We have to learn everything we come to know as human beings. We share a great many traits with other animals, yes, but those, which are exclusively human, we have to learn from others.

All these are basic behavior needs, which are as much a part of our genetic system as the physical needs. Yet, we haven't recognized them. Look at any textbook on the nature of human nature and you won't find any mention of them.

If you would understand what human beings are born for, you first must understand what they're born as, and this is what I have dedicated myself to, to attempt to show that we are borne with the capacity to love. But we will never know how to love unless we are taught to love, unless we learn to love others who know how to love. Not that it is impossible to correct this at any age, because we remain educateable all the days of our lives. It's never too late.

Question: What do you mean by love?

Love: what is love? Well, to spell it out briefly, it is the ability to communicate to others your profound involvement in their welfare, such that you will never commit the supreme treason of letting them down, whenever they most stand in need of you, and that you will minister to and encourage the growth and development of their potentialities. That's love.

Question: What about survival of the fittest and competition?

Survival of the fittest is a term coined by a sociologist name Herbert Spencer. And that was a very unsound view of Charles Darwin. What Darwin was saying was not survival of the fittest but the survival of the fit. The fittest won't survive if the environment changes. In the age of conflict of the 19th century, competition was the principal by which most of the imperialists nations lived, and was therefore readily accepted, joyfully by the military staffs of every country.

We have elevated competition into an idol, the foot of which everyone has been taught to worship. But research has shown that not just human nature but all of nature is really cooperative. As early as 1872, a Frenchman published a book on the subject of cooperation being a more important factor than competition in the social Darwinism sense. And now we have a large number of people who are beginning to see that the formative years of human evolution were in cooperation with each other, it could not have been otherwise.

Question: What lies at the root of this spirit of cooperation?

The basic pattern and patent of social behavior in the human species lies in the relation between mother and child. She has carried that child in a womb for 266 1/2 days, which is actually the average from conception to birth, not delivery. Doctors deliver babies but shouldn't.

But they are expelled rather roughly and usually taken away from their mother, which is wrong. It's physiologically/psychologically wrong. Both baby and mother need each other more at that time than they ever will again. The baby should be put to nurse at his mother's breast whereupon it induces an enormous number of wonderful changes in the mother, such as an arresting of the postpartum hemorrhage, which no obstetrician can do under the circumstances, but a baby can do. Which indicates that there is more intelligence in the upper and the lower lip of one baby than all the brains of all the obstetricians put together.